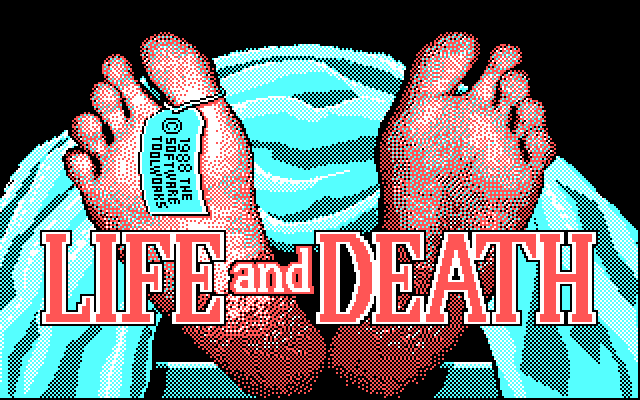 Consider those fears heightened for Life & Death, a surgical simulator that has an unclear relationship with science. The game’s manual clearly states that the game should “UNDER NO CIRCUMSTANCES” be mistaken for genuine medical advice or education, but that’s a forgivable error. Life & Death is sickeningly realistic and unfair, just like the real thing. 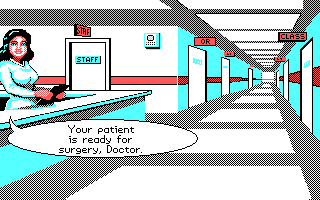 Toolworks General is a friendly hospital

Life & Death places you in the role of a new physician/surgeon at Toolworks General Hospital. You are theoretically an expert in the abdominal region. Each of your patients has some sort of tummy problem ranging from some gassy bloating to kidney stones or serious ailments. As the doctor on-call, your job is to diagnose each patient and determine the proper course of action. Each patient arrives at the hospital with a chart briefly describing their symptoms. You need to check on them by prodding their stomach and, if necessary, running an X-ray or ultrasonic scan. Sometimes their treatment will be a simple referral or medication, but given your line of work, surgery is often the only option. Though the game is generally open-ended and presents you with a constant stream of patients to treat, it does offer a diploma and a place on the honor roll for successfully completing the hardest procedures.

Any level of success depends on slavish reference to the game’s manual of diagnostic and treatment methods. The manual explains how to determine various major types of ailments, and the game expects you to follow those procedures precisely. An X-ray will reveal kidney stones, but Life & Death won’t give you credit for the diagnosis unless you first rule out appendicitis. It expects the same level of medical standards as real doctors (which is all the more troubling if the in-game procedures are inaccurate). Misdiagnoses and sloppy handiwork result in a lecture from a hospital resident. These scoldings are helpfully informative about the specific mistakes you make rather than just rote tutorial nonsense. You can kill patients and attend lectures as many times as you need to, easing the stress of repetitive failure. 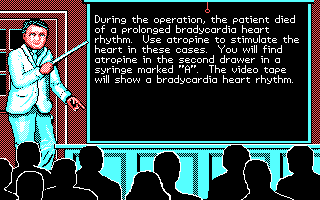 The real meat of the game, so to speak, lies in the surgery mode. After a few initial scares from treatable ailments, your patients will develop more extreme problems such as appendicitis or aneurysms. These conditions require surgery, by far one of the most challenging experiences in any DOS game. Based on a walkthrough available online, there are only two different surgeries to attempt, but they more than justify their enormous share of the time investment. Surgery requires the same procedural exactitude as diagnosis, but the number of moving parts increases dramatically.

Take an example surgery. At the start of any surgical procedure, first you have to wash your hands and put on gloves. Then the patient needs cleaning with antiseptics, and the afflicted region has to be covered with sterile drape. Before any cutting begins, the patient also needs to be administered anesthetics, receive antibiotics, and have an emergency blood drip set up in the event that they bleed out before you can cauterize their cuts.

Again, all this happens before any actual surgery takes place.

You then have to make specific types of cuts as requested by the manual.  The game penalizes for uneven, sloppy, and ragged work. Even a successful surgery can be discounted for not following the step-by-step instructions carefully. A litany of other errors can occur along the way, such as patients developing an arrhythmia and needing an emergency drug dose. Attention to detail is a must: you’ll have to keep an ear on the sound of their heartbeat, as well as watching for any sudden bleeding. Thankfully, you can bring up to two specialized surgical assistants who will point out a number of these changes, freeing some of the observational burden so you can keep cutting. 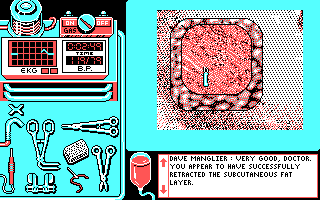 Not that the surgery itself is much easier with assistants around. The surgical theater still has dozens of tools, and the difference between staples and a skin spreader matters greatly in a pinch. Surgery certainly isn’t for the faint of heart either. The graphics might only use four colors, but the blood-and-guts details are still prone to make you a little queasy. It’s tense as hell, and frankly, I have not been able to successfully complete a surgery yet (but I keep getting better!).

This is all to say that the attention to detail transports you further into a doctor’s shoes than surface-level medical games like Trauma Center, but it comes with deep frustration. Successfully completing a stage of a surgical procedure is a viscerally rewarding experience, but it can be marred too easily by tiny mistakes like failing to administrate lipocaine or accidentally grabbing scissors instead of forceps. Life & Death steers into those aggravations more often than it should, and the results are usually impeding rather than challenging.

Given the enormous learning curve, it’s often more fun to just see what goes wrong than successfully complete a surgery. Maybe that’s why I didn’t go into medicine.

If it wasn’t hard enough, Life & Death includes multiple difficulty modes, including a “Nightmare Mode” in which patients give only vague symptoms.