Dig up old custom worlds in the groundbreaking Museum of ZZT 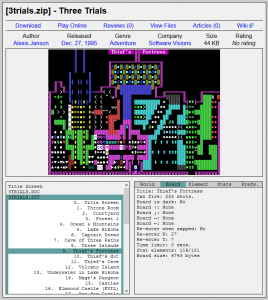 Over the last year, Dr. Dos has built up Worlds of ZZT, a social media project to explore the massive, influential volume of custom content for the 1991 game ZZT. The game’s level editor and its community were, for a certain generation, a first easy gateway into game design. ZZT‘s influence reached wide – but quietly. Now 26 years removed from the game’s release (and the follow-ups like Super ZZT and MegaZeux), fan-made levels have been difficult to rediscover.

Dr. Dos’s Museum of ZZT, the culmination of Worlds of ZZT project, is one hell of an answer to that problem! The Museum goes far beyond any other collection of user-created game content. In addition to play each level pack in-browser (thanks to Internet Archive contributions from Obscuritory friend Duncan Cross), Dr. Dos’s tools allow you to dig through the games’ files to look at their individual scenes in detail. No other project in this scope comes close to the care put into here. Dr. Dos also regularly writes “Closer Look” articles about specific ZZT worlds, adding a much-welcome guide to the unique and representative items in a collection that easily could’ve just been a big file dump.

(The site also offers bulk downloads and, importantly, an understanding that users may want to opt out of having their old ZZT levels re-shared or at least publicly associated with their name.)

Amateur games and add-ons like ZZT worlds are among the games most in need of more attention (and preservation energy). The Museum of ZZT is the high watermark for what can be done to break those types of games out and show why they’re special. It goes above and beyond simply being a repository or a list of files. And it’s worth noting that this is entirely a fan-run operation. I can’t wait to see the next generation of enthusiastic fans this could inspire, both for ZZT and for other amateur game communities. What could be next? Browseable StarCraft maps? A way to visit settings from the old BYOND online game engine?