What happens with old software copyright when nobody cares? 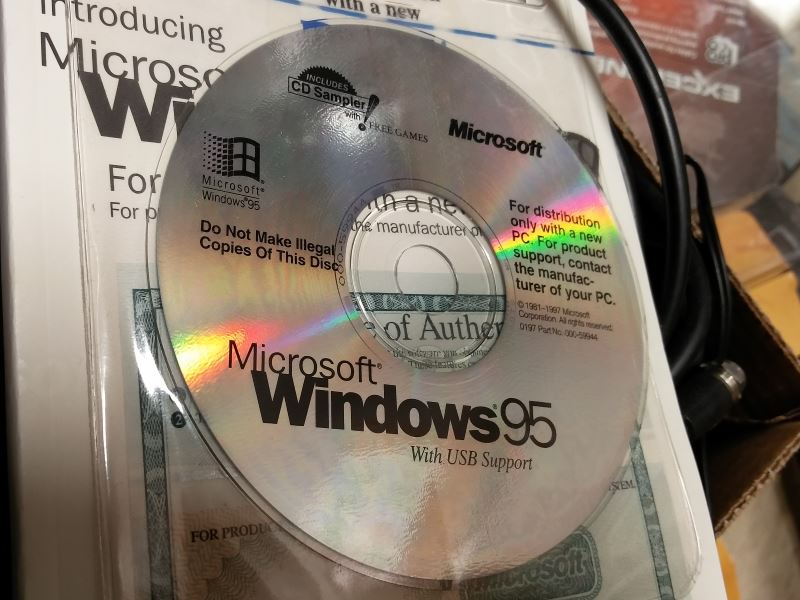 A CD-ROM copy of Windows 95. Note the part that says “Do Not Make Illegal Copies Of This Disc”

Once in a while, I update this blog’s Resources section, where I’ve collected links and information about how to find, get, and play old games. Hopefully it’s a great collection! There’s one particular site that I’ve held off including for a while, WinWorld, that enters legally uncertain territory. I want to talk about it a bit, because it raises important questions about how we deal with abandoned software.

WinWorld hosts copies of obsolete operating systems and system tools dating back to the early 80s. Old system software like this comes in handy for emulation, when you might need to install a copy of Windows 95. The website is, of course, dubious as hell. They’re distributing huge volumes of copyrighted software, sure to incur the legal wrath of Microsoft.

But Microsoft knows about WinWorld, and for the most part, they seem fine with it.

According to a WinWorld administrator, Microsoft has sent the website takedown requests, but only for copies of Windows XP and Office 2000. Compared to Windows 95, these are two relatively newer pieces of software that are still being used today and compete with current Microsoft products. There’s good reasons they’re not available. Nothing else was targeted, including earlier versions of Windows. Microsoft could have shut down much more of the site, but they didn’t.

The selective attention to this topic is telling. By requesting takedowns only for their more recent, usable products, even when they’re all hosted by the same website, Microsoft seems to have sent a silent message of permission to use their obsolete, out-of-distribution software for free.

Being able to download and share old operating systems openly is a huge boon for digital preservation. Like browser-based emulation, it could open new ways to help people experience old games and software and do something new with them. Outside of specialized holdover cases, the people attempting to run Windows 95 in this decade are hobbyists, tinkerers, or preservationists, folks researching old games and software. Microsoft seems to tolerate that. Maybe it’s because there’s no meaningful commercial market worth caring about. (As an indication, Oracle’s VirtualBox, one of the major emulation programs for businesses, doesn’t bother supporting Windows 95.) In any event, the inaction there seems deliberate.

To be clear, nothing has been approved, and nothing has been officially released for free. Microsoft could still assert their copyright at any moment. But when that’s selectively, knowingly unenforced, is this okay? Should we use this? Could it be an acceptable use for research? I’d argue yes.

It’s a tricky question, and it could have a different answer for individuals and for institutions, like museums, with greater responsibilities. It would be ideal to be able to work with companies to remove that ambiguity by formalizing these permissions or by providing a preservation-focused licensing agreement. The software that powers Amiga computers, for example, was licensed to Amiga Forever to be legally bundled with emulators. That doesn’t always happen, or it can’t, or the rights holder doesn’t want to. That’s where these extralegal areas appear. In cases of obsolete, commercially nonviable software, it almost seems to be treated like jaywalking laws – technically on the books but rarely invoked if you’re causing no harm.

During the early days of sharing video game ROMs online, some sites would put up a bogus legal disclaimer saying you were allowed to keep the ROMs for 24 hours. It was basically nonsense meant to justify file-sharing. Now there’s a different justification: in some cases, nobody cares.