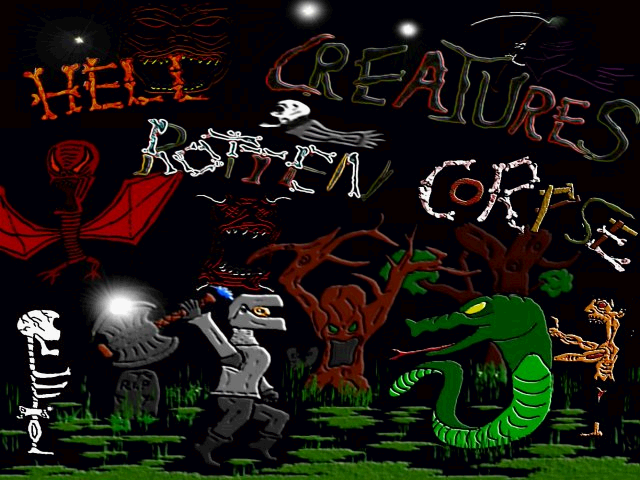 If you must play Hell Creatures Rotten Corpse for one reason, do it for the enemy designs.

The incredibly titled Hell Creatures Rotten Corpse is a gruesome game, a slobbering mutant of a game, with a bestiary that seems to have crawled out of an irradiated Hot Topic. It draws blatantly from Capcom’s Ghosts ‘n Goblins arcade game series. Both start with an armored knight fighting through a graveyard of the undead to rescue a princess. Capcom’s game, though, doesn’t play a MIDI of Blue Öyster Cult’s “(Don’t Fear) The Reaper” on the title screen.

After a long-winded backstory about a damsel-in-distress who can save the world with magic, the game puts you on a journey through the woods, up a mountain, and into the Forgotten Castle of Terror. Standing in your way are hundreds of weird fucked-up monsters, winged demons, malevolent trees, and assorted supernatural forces of nature. All of them must die.

This cavalcade of ultra-violence was created by Stian Berge using the game creation tool Multimedia Fusion – and, apparently, using his mouth for the sound effects. It’s a straightforward and sometimes flat action game with unintrusive platforming sections that rouse a little extra movement. (Well, straightforward and unintrusive apart from one terrible level I’ll get to later.) When it was released in 2002, based on the comments section on the gamemaking community site The Daily Click, users balked at its 10 MB file size, which at the time was a large amount to download over dialup internet for a free homemade game.

Knight Richard, your character in this bloodbath, starts the game with throwing daggers. As the adventure progresses, he can upgrade to increasingly ridiculous weapons, like a huge battle axe and eventually tossing double-fisted swords like they’re spears. Weapon treasure chests only appear once you’ve touched some secret spot in the stage, which leads to paranoidly hopping around searching for them. 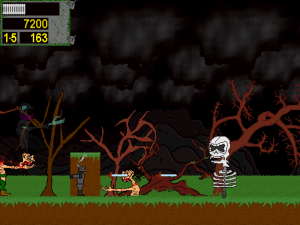 The path to victory is lined with rotten corpses

But you need to find them, because the creatures you encounter keep getting freakier, stronger, and larger. It isn’t enough just to fight zombies or ghouls. During the first level, you cross paths with an emaciated ogre-like monster that throws its own severed head at you, dripping with blood. A human-sized skull spits bones at you while a 12-foot-tall specter chases you from behind. Gross-out body horror is a strong inspiration: one disgusting enemy erupts in a gory pregnancy, flinging their child, if it can be called that, as a projectile.

My favorite creative monster appears in the third level: it’s a sentient skull-spewing tree with eyeballs growing on it. If you chop off its eyes, it can’t see you anymore. and it barfs out skulls in random directions.

The boss battles stretch the bounds of this grotesquerie even further. Hell Creatures Rotten Corpse runs at 640×480 resolution, which would have been the full screen on a late 90s computer. With a relatively small player graphic, this leaves tons of room on-screen for absolutely massive bosses. Tyroll the buzzsaw-wielding troll, for instance, lumbers around at nearly three stories tall. The enormous skeleton Imhopted with confusingly beefy upper arms (can a skeleton work out?) gets an assist from an angry, thorny tree that bats its branches around. The cave level has both a cabin-sized flying demon named Great Pharox and an unnamed bipedal dinosaur that rips apart into a viscous river of blood when it dies.

Despite how unbelievably dark and grizzly Hell Creatures Rotten Corpse sounds, it’s a fairly playful game. The art style uses flat colors and thin line, likely drawn using Multimedia Fusion’s built-in drawing tools, which makes even the crazy-ass horned demons look cartoony. Most of these bosses and enemies don’t do anything particularly clever, but it can be mindlessly unengaging fun to face off against big, goofy, gross monsters that explode into poorly drawn showers of blood. 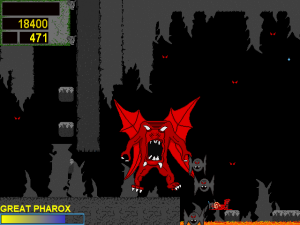 Humongous bosses like Great Pharox are the highlight of the game

In the surprisingly exciting battle against Tyroll, you scale up platforms to jump over him as he slowly walks across the screen hurling saw blades. Most other enemies just sit still and throw things at you; that would be boring if there weren’t so many different extreme creature designs that look like Halloween storage decorations, like a two-headed skeleton ghost (???) with a knife.

The game gives you ample lives, passwords, and hints. Despite using the subpar character movement physics that come with Multimedia Fusion, the linear, uncomplicated levels mean the controls seldom have a chance to get in the way, only in tricky cases like trying to crouch and throw weapons at the same time.

And apart from the fifth level where you climb up the mountain. The ledges on the mountain are so small, and you can’t control your speed when landing from a jump, so you’ll slip and fall down to the bottom and warp back to the previous level. The levels do a great job compensating for the controls otherwise, but this one is horrendous and, thankfully, not typical.

Hell Creatures Rotten Corpse is easy-going for a game soaked in blood and screams. It lands on the silly side of horror, as long as chopping apart truck-sized snakes and hideous man-monsters sounds silly to you.

Hell Creatures Rotten Corpse still seems to have a small fanbase – or at least one diehard fan who has been working on a remake of the game,

In the interest of preservation, I’ve uploaded two versions of Hell Creatures Rotten Corpse, plus the standalone expansion Nightmare, to the Internet Archive. These were available via an archived version of Stian Berge’s website and freeware game site Caiman.us, but a second expansion, Beyond Hell, is unavailable. If anyone reading this post has a copy, please reach out!