The Frogs Of War 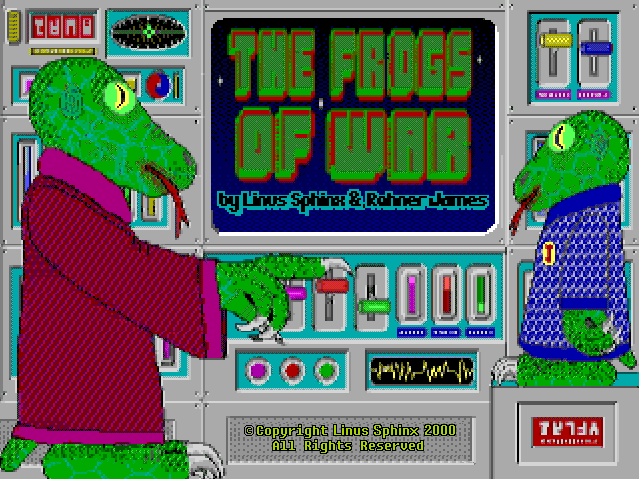 The existence of The Frogs Of War is a testament to how games can be the right format for someone’s wild inspiration.

The Frogs Of War was based on a dream that developer Linus Sphinx kept having. He imagined he was a lizard man enslaved on an asteroid. He was forced to dig pathways with a mining robot, a frog-legged vehicle that emits slime. A revolution broke out on the asteroid mine, and the managers pitted their subjects against each other in a battle to the death over a promotion. Sphinx remembered this because he “took notes on a microcassette recorder,” which he kept under his pillow so he could write code during his sleep.

He turned that dream into a game, and it’s every bit as perplexing as it suggests.

Sphinx originally made The Frogs Of War for DOS and Windows 95, but in an angered response to Microsoft’s policies, he switched the game exclusively to Linux and Linux handheld consoles. “I am no longer their un-witting stooge, I like my platform am free,” he declared on the Frogs Of War website. “We own the platform as well as the application.” He wanted independent control of his own thing, and in the case of this game, he certainly got that.

The first thing you notice about The Frogs Of War is how dusty it looks, for lack of a better word. The original DOS EGA version of the game from 1986 would have supported only 16 colors. Over the next fourteen years – yes, he continued working on this game for two decades – the developer updated the graphics while intentionally trying to mimic their original low-fi style. The Frogs of War website says he meant the game to have a “dark artsy ‘noire kind of feeling,” yet it comes across more as flat and noisy. Special effects are squiggly lines. The walls of the asteroids are textured with random magenta dots. 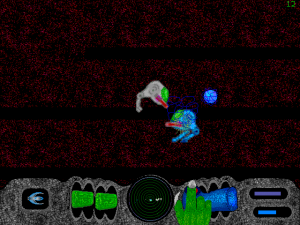 The Frogs Of War has this feverish intensity that’s impossible to follow. The game speaks its own language, literally, which you see on the game over screen, but figuratively too. It was intended as a competitive multiplayer action game, but it belongs to some far stranger dimension than that description implies.

From the moment the game begins, it feels like a panic attack. The screen is whipping around and changing colors before you even get the chance to figure out where you are. The mining robots (called many names, including “battle frogs”) have with this careening, herky-jerky motion that’s meant to be like the lizard men manually controlling the robots. At the bottom of the screen, there’s a pair of lizard hands moving around, pulling levels and pressing buttons. Your inputs, such as the keys to jump or move down, are more like suggestions. The sound effects playing in the background alternate between strange moaning noises that sound like they’re coming from another room, sudden loud screams, and sirens. The only mood is high-energy chaos, and it never pauses.

Chances are that your battle frog will be blown up pretty much instantly. But even after you die, the game still keeps going! The battle frog evaporates into a cloud of mineral vapor, which you can pilot back to the “transmorphic orb” at the starting place in order to be reconstituted into a new body. What is the orb?! Who cares? If you press the help button, the game throws a breathless, unpunctuated wall of text on top of the screen in a hard-to-read font about the Invitro 5 mining company and the battle frog’s “transmission shift lever” and “center double clutches.” The game continues running underneath it. Do you really want to attempt to read that? 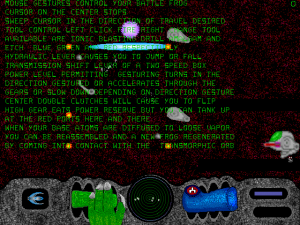 The in-game help is outstandingly inconvenient

After half an hour trying, I won a game of The Frogs Of War, and I still barely have a handle on it.

It is, of course, based on a recurring dream, a stream of anti-logic that makes perfect sense in the moment but disintegrates when you try to piece it together in another context. And so it happens here too. The frog robots, the asteroid, the white-collar business lizards holding deathmatches, the mystery orb, the sentient molecular clouds, the ghostly lizard dressed in a wizard robe and some sort of royal Egyptian clothing that beckons to you after you die – everything comes out of a single storm of unconscious imagination that falls apart when it’s given to someone else.

Yet because it’s so energetic, so devoted to fulfilling a strange 20-year-old dream, The Frogs Of War excels on its own inscrutable terms. It is a monument to one person’s enthusiasm and a unique experience in this world.

The Frogs Of War 2.2 for Linux is available from the official website. The older DOS and Windows 95 versions have, fittingly, been removed.