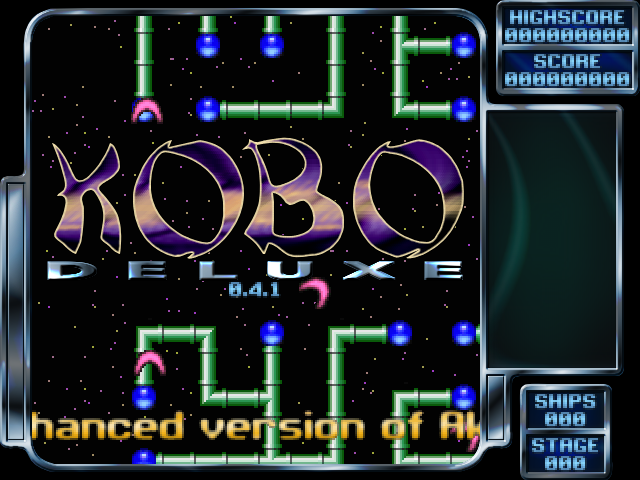 Kobo Deluxe rules. It rules because it creates simple, effortless drama with only a few pieces.

The game is a retooling of xKobo, a Unix action game by Akira Higuchi that itself was based on the 1981 arcade game Bosconian. With each iteration, the game has gotten a little faster, smoother, and snappier. Your targets are “fortresses,” these tree branch-like space stations. Blow up one node of a fortress, and the others under it will blow up too. The center node can take a while to reach depending on the size of the fortress. 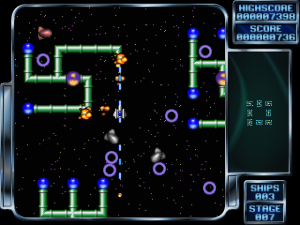 A flurry of bullets, missiles, plasma rings, and spacecraft will pipe out of the fortresses as soon as you close enough to one. (Or worse if there’s two or more.) But instead the focus being on dodging complex patterns of bullets, the better strategy is to duck away from them and then begin another approach. So you launch into a dance, circling in and out of the range of fortresses, searching for an opening to carve away at them until you can pluck out the center node and watch them unravel. Because your spaceship fires out of the front and back at the same time, you’re rewarded for retreating too. (With the funny side effect of sometimes hitting a fortress as you fly away from it and missing the explosions.)

This feels absolutely rock solid to play. Kobo Deluxe is a lean, punchy game. It moves quickly without being overwhelming. It has a clean, crisp aesthetic. It succeeds by being straightforward as hell: the game has one type of target, and the only controls are moving and firing ahead. You could turn on an “always fire” option and simplify it even more!

Once you adjust to the rules, the flow and cycle of the game become an automatic response. I never had to think about dodging missiles; I just did it. It’s that great kind of intense yet easy-to-play game that allows you to get into a zone and space out.

This Deluxe version of Kobo adds a health bar and a meter that regulates the speed of your weapon, but those inclusions take away from the appeal of its directness. The classic mode, pared to the basics, represents Kobo at its best.

Two separate sequels to Kobo were abandoned, a 3D version by Pierre-Loic Herve called zKobo and an overcomplicated followup to Kobo Deluxe titled Kobo II. The developer of Deluxe released a modernized version of the game, Kobo Redux, in 2017.