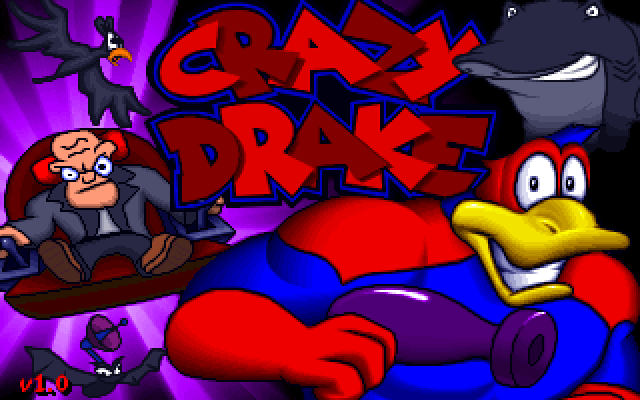 The platform game boom in the 90s begat an odd brand of artistically driven mascot games. Earthworm Jim, Plok, Zool, Cool Spot, and their ilk owed much of their success to their terrific cartoon styles. There’s an argument that their visual accomplishments could sometimes come at the expense of the rest of their quality. That conversation deserves a greater breadth of games to scrutinize, and one additional name on that the list should be Crazy Drake.

Not much distinguishes Crazy Drake from those other games, and it bears a suspiciously close resemblance to Earthworm Jim in particular. The similarity works in its benefit here. Like the rest of its breed, Crazy Drake is a pretty good action-platformer with the cartoony, elastic panache. Another game in that vein doesn’t exactly break new ground, but it’s certainly a pleasant surprise.

Crazy Drake‘s plot includes all the stereotypical superhero ingredients. When the nefarious Dr. FowlBrain steals Ducktropolis’s all-powerful Sacred Golden Egg, Prince Drake dons superhero garb and travels the world in a hunt for the mad doctor. This sets the game up for a variety of stock locations, from a haunted house to a Christmas-themed snow land. (And hey, it’s not another damsel-in-distress story.) Each of the game’s six worlds share a similar structure: there’s one platforming level with a miniboss, a second level that starts with an auto-scrolling challenge, and one final stage with a miniature showdown with Dr. FowlBrain. The short world structure ensures that the game moves quickly from setting to setting, even if the individuals levels tend to drag from their length and lack of internal variety.

Games in this vein place a premium on the quality of the platforming and artwork, and in its biggest triumph, Crazy Drake knocks these out of the park. Most of the game involves jumping from platform-to-platform and collecting bonus tokens, and that’s handled with aplomb. Movement is exceptionally fluid. Easy jumps and a forgiving mechanic that allows you to climb up ledges, gives the run-and-jump core the strength to stand apart from similar clones. Visually, the game’s flat coloring, bright colors, and over-the-top animations capture the energy of a Saturday morning, and the scenery hits the right level of abstraction and goofiness. 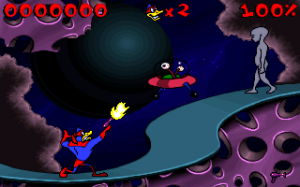 The teleporting elevators that rescue you from deep pits provide the best example of the game’s style. When you get close enough, a mysterious hand yanks Prince Drake into the elevator and summarily boots him out at this destination. They still have the same functionality as a normal warp, but the animation adds a little wackiness to a feature that gives the level design some cohesion, cuts down on backtracking, and keeps the pace moving.

That attention to level design marks another spot where Crazy Drake matches or one-ups its contemporaries. Artistically heavy platformers tended to have open, exploratory stages, but they often feel cramped or cluttered by all their visual detail. Sometimes, the curving platforms and busy backgrounds in Crazy Drake are confusing to jump around too. But usually, the game has clean visual language that helps you navigate that sprawl. Little touches like arrows give the stages direction while still giving you clearance to explore.

The levels fit in the game’s narrow screen size, while its combat doesn’t. When you fighting enemies, the camera violently whips away to show you what you’re shooting at. Plus, your gun seems to have a very narrow angle compared to the weapon on Earthworm Jim. Especially on the curvier stages, lining up a shot on a moving enemy can be annoying and nearly give you whiplash.

And as holds true for many visually exciting platform games, the soundtrack is really upbeat and catchy. It doesn’t steal the show here; instead, it adds to the overall ambiance and deserves at least a closer listen.

Thanks to an uncanny and almost infringing closeness to its competing titles, Crazy Drake shares many strengths with the bigger games from its era. In some places, it improves, especially the kinder and more coherent platforming. Other aspects such as the combat and occasionally padded-out levels fall shorter. Maybe the game lacks inventiveness, but it still works pretty well, both in the context of similar games and on its own merits. That’s enough for a platformer with an energetic animal hero, and Crazy Drake is a welcome addition to that club.

Two editions of Crazy Drake exist. The original, released by One Reality, takes place in Loonville rather than Ducktropolis. Prince Drake is also missing his signature mask, giving him a much plainer and outwardly silly appearance. This article was based on the second release by eGames; the differences between the two versions are entirely cosmetic.