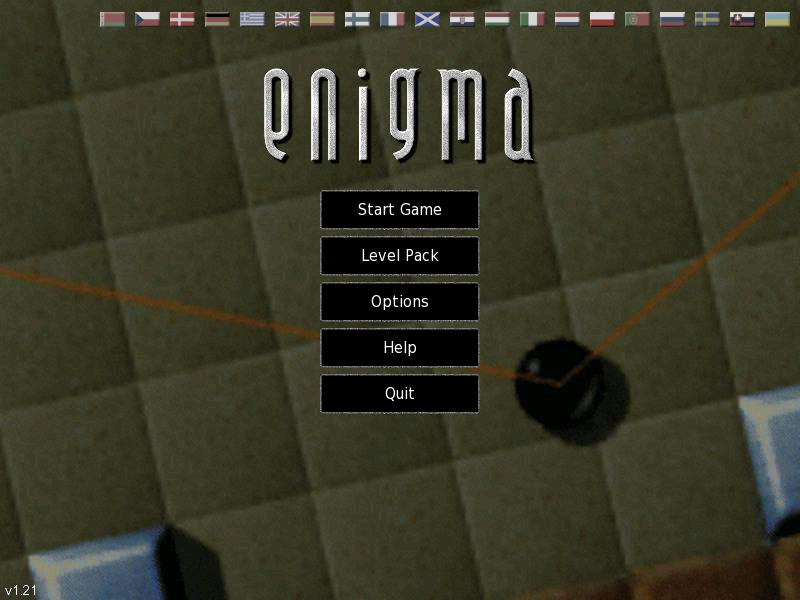 18 seconds into a level in Enigma, I have to pause the game. This is Advancing, the eighth stage in the seventh set of levels, and at first glance, it looks like it’s going to be a hellacious version of the puzzle Rush Hour. A series of long blocks stand between me and the rest of the stage, and I have to slide them around in the right order to get to the end. It soon becomes clear that there’s another layer to this level: I can also push the blocks into the water to make bridges. At the moment it hits me, I pause the game and mutter, “Oh my god.”

That’s Enigma, a dastardly over-complex puzzle game so intricate and expansive that you can’t help but marvel at it. 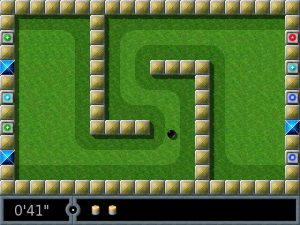 The game at its most basic

Enigma is a free, open-source copycat of Oxyd, a German puzzle game from 1990. In both Oxyd and Enigma, the basic puzzle is a matching game, like Concentration. There are a few “Oxyd stones” in every level with randomized colors and shapes hidden under them. You control a ball using the mouse, and the goal is to match Oxyd stones together in pairs.

The game will put puzzles between you and the Oxyd stones, but matching Oxyd pairs is equally a dexterity challenge. On one of the tutorial levels, Without Tremor, the path between Oxyd stones is lined with bouncy walls that will make you lose control of the ball if you tap them. Another introductory level, Hurry!, has a timed gate to the other side of the stage that will lock you out after five seconds. The ball has physics and momentum that you can feel when you move the mouse; it takes more of a push to move up slopes, and different surfaces have their own textures that subtly affect how the ball rolls. The effect feels uncanny.

The levels start out fairly simple, but even by the end of the tutorial, they get pretty elaborate – using mirrors to reflect lasers into Oxyd stones, pathways that collapse when you roll over them, and one level with a block that roams around the stage hitting Oxyd stones on its own. That’s as straightforward as it gets.

Most levels in Enigma are so complex that they barely resemble the original premise. It’s like the game was created by a level designer drunk with power. 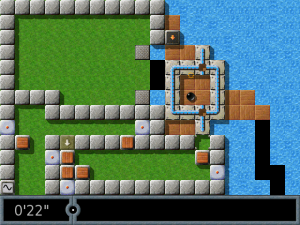 In the level The Cage, your ball is trapped in a box that it has to push from the inside around dangerous terrain

The game regularly introduces new rules and pieces. There are dozens of objects to interact with, like a hammer that can break certain walls, an umbrella that lets you float over pits, and a spring that gives you the power to jump. And an envelope, and a sword, and a coin with a matching coin slot. There are “Shogun blocks,” which stack on top of each other to activate switches, and invisible walls and secret passages. Tiles that reverse your controls. Blocks that switch places with other blocks. Electromagnets. Floors with negative friction so your ball keeps accelerating.

Enigma combines them into all manner of extreme, devious obstacles. They test the limits of precise mouse control and logical thinking. Keep in mind that even on stages that are mainly logic puzzles or combinations of keys and switches, you’re still fighting to control a ball that’s sliding around on unpredictable terrain and could easily ricochet in the wrong direction.

The levels, created by a large team of contributors, go through endless combinations of ideas that span the full range of what could be possible with these mechanics. A brilliantly simple stage like Surgery uses basic components – thin, frictionless hallways lined with death traps – to create a challenge with nerve-racking precision. On the flipside, stages like A Screenful of Secrets are so dense with random objects and surfaces that they’re beyond understanding, yet still governed by the game’s rules. Some stages have two balls you can swap between. One stage ties your ball to the top of the screen with an elastic tether. Some take three seconds to beat; others have a par time of nearly an hour. Many times, there are only a trivial number of Oxyd stones to activate, and the overengineered Rube Goldberg-esque contraptions are the whole point. 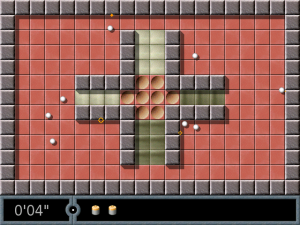 The Meditation stages are aaaaarggh

For a break in the action, the Meditation stages have you attempting to place multiple balls into little divots in the ground. They demand patience and finesse, and they can be about as far from meditation as possible.

Several level packs totally depart from the game’s roots in Oxyd and build other types of puzzles within the game. There are hundreds of Sokoban-style block-moving levels, as well as the Pentomino puzzles, where you push together oddly-shaped five-tile blocks to create larger forms. Most bizarre are the Chessopals, which initially seem like simple matching puzzles until you realize you have to move the Oxyd stones around like chess knights. Oh lord.

Collectively, the game is impossible. The most recent version of Enigma from 2014 lists a total of 2510 stages, plus 397 easy mode variants. As of this post, the top score on the official Enigma leaderboard belongs to someone named Gabian, who has credit for beating all but 7 stages. No one has completed the entire game. Given its obscurity, possibly no one ever will. 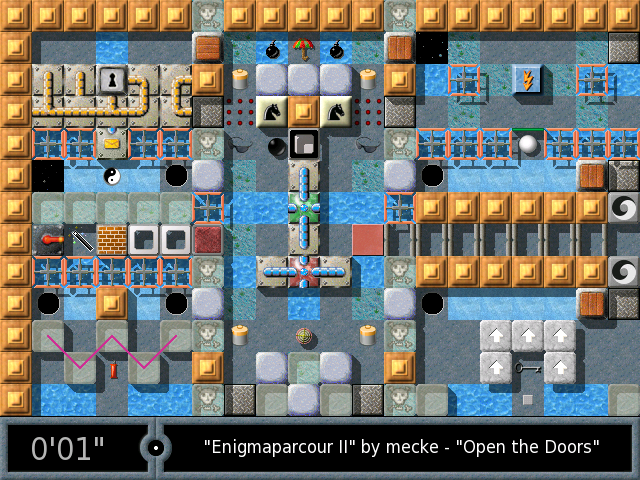 The Enigmaparcour stages have to be a joke, right? 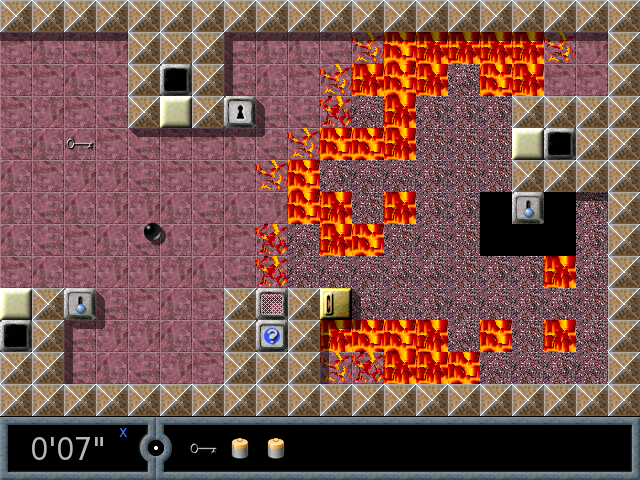 This level has a higher sense of urgency…

That’s the wonderful thing about Enigma. We’ll never finish it, so there’s no point attempting to. Instead, we can play many different parts of it and admire how ludicrously complicated it is. 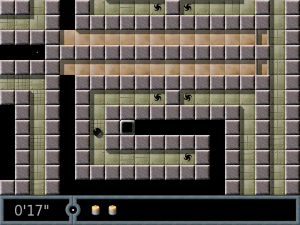 Sometimes the toughest puzzle is simply an endless maze

Unlike the linear level progression in Oxyd, Enigma has a level select menu, so you can hop around stages in any order. Occasionally, the stages have infuriating, unintuitive designs, such as TNT Shortage? in level pack 4, which you solve by finding an invisible passage in a wall that you can only locate by brute-forcing and repeatedly restarting the level. But you don’t have to finish it! You can go directly to the stages with cooler concepts instead: Steering the Flood approximates a civil engineering project by using explosives to redirect flood water to reach certain Oxyd stones at different times.

Or maybe sometimes you want to play something impossible that pisses you off, even just briefly. That’s an option too. The level Sisyphus requires pushing a ball up a hill, appropriately, which handles like grabbing a wet bar of soap. Although I can’t imagine who would have the patience for that stage, it’s a hoot to play it for a minute or two.

It helps that Enigma doesn’t posture itself like a super-difficult puzzle game. It has a pleasant, unassuming, palatial garden-like aesthetic, strong on symbols and pictograms. It rarely acknowledges how ridiculously hard it is, and that makes it more approachable. It never rubs it in your face.

What do we even want out of Enigma, though? Why do I keep going back to it so often that it actually delayed me from finishing this post? I’ll never complete a single one of the Chessopals, but I sure appreciate knowing they exist.

Attempting to solve a level is an act of defiance against a gargantuan, immovable, unknowable object, like throwing a rock at the sun. Enigma is undefeatable. It is the last puzzle game.