Kaze no NOTAM – NOTAM of Wind 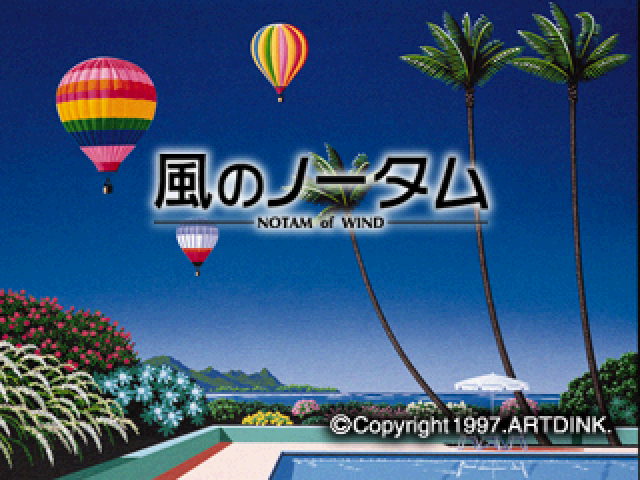 There’s no way to steer a hot air balloon. I don’t think that occurred to me until playing Kaze no NOTAM.

In real life, you can move a hot air balloon up or down, but once you’re in the air, it’ll go wherever the wind is blowing. A skilled balloonist can determine the direction of the wind at different altitudes and try to maneuver into a more favorable wind pattern, but that’s about as far as they can control it. It’s the same way in the game. On the right-hand side of the screen, there’s a meter that shows the wind direction at different heights. You can look for an air current that points you in the general direction you want to go, but beyond that, it’s out of your control.

“NOTAM” in the title of this game refers to a “notice to airmen,” an alert sent out to warn pilots about flying hazards. In this case, as the English title translation NOTAM of Wind indicates, it’s a warning about the unpredictable, strong winds that your balloon is being subjected to, which makes sense because they’re certainly much stronger than a real hot air balloon would be safe to fly in. At one point or another, you’ll be blown off-course, or you’ll have loop back around to the place where you actually meant to arrive. If you’re especially unlucky, you’ll get a bad pattern of wind, and you’ll get swept into the mountains – or off the edge of the map entirely. 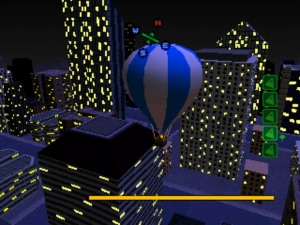 You can choose the time of day and weather for your flights. Windy City looks terrific at nighttime

It seems like a risky choice to take control out of the player’s hands like this. On its surface, Kaze no NOTAM is a competitive sports game with leaderboard rankings, which doesn’t play well with a game concept where you can randomly drift away. But it takes what should be an incredibly frustrating game – and it occasionally is! – and turns into an opportunity to relax.

At first, I was surprised that Kaze no NOTAM was trying to be both a calm, ambient game and a score-based sporting event, but hot air ballooning is actually the perfect sport for a game like this. From what I can tell based on same very cursory reading I did about ballooning, hot air balloons don’t actually race, probably because the reliance on wind means that nobody has a real advantage. Instead, the goal of a balloon competition is to reach a target location and drop a weighted marker on it, like a beanbag, which is a task that’s more about navigation and accuracy than it is about speed. Kaze no NOTAM uses that as a loose inspiration. The objective of the game always involves throwing a marker at something – and for the most part, you’re not being judged by how fast you get there.

Kaze no NOTAM has an energy that’s both sharpened and very relaxed, where the tension eases away even as your balloon starts to pick up speed in the wind. When you start an event, the camera pulls back and upwards in a swooping motion, like you’re launching into the air, creating the impression that you’re soaring much higher above the low-polygon planet than you actually are. As the camera snaps up, a peaceful electronic soundtrack kicks in that nowadays would be described as chillwave or vaporwave, buoyant synth music steeped in a sense of melancholy and wonder. And then you float away. It’s like the game starts with a sharp intake of breath, and everything that follows is one massive exhale. 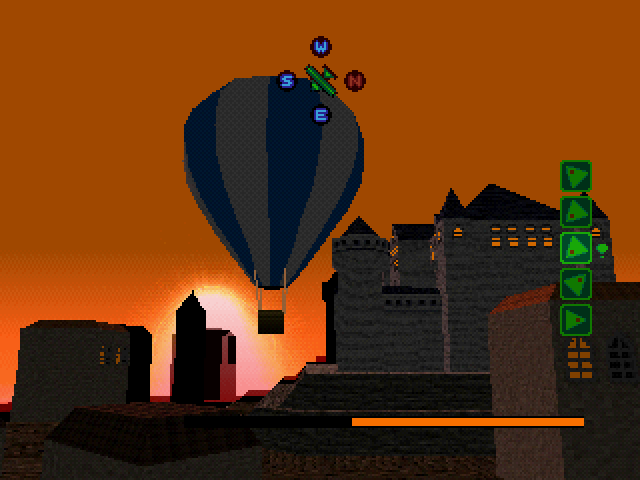 The swirling off-center camera will produce amazing scenes like this sunset over Drafty Valley. If Kaze no NOTAM came out today, it would have a photo mode.

The free-floating peacefulness in Kaze no NOTAM can be intoxicating, so it feels especially disruptive when the game punctures that mood. As you approach your target, you’ll often have to spend several minutes fighting the wind to get close enough to toss out a marker. You might not even get that far, since there’s a decent chance, depending on the level, that your balloon might get forced into such an awkward position that you can’t reasonably continue playing. If you’re trying to reach somewhere in particular, Kaze no NOTAM can be a real test of patience.

The flipside is that the stakes are kept incredibly low, to the point where the game lets you choose your own starting place on the world map each time you begin an event. You can quickly reset yourself in a new starting place with no penalty, like nothing happened.

It sends a clear signal that it’s okay for you to meander, and that there’s no fixed path for you to travel down. The entire surface of the world is covered with interesting scenery and landmarks, a reassurance that even if a strong gust blows you in the wrong direction, you’re never going the wrong way. From hundreds of feet up in the air, the limited rendering distance on the PlayStation prevents you from seeing too far away from the balloon, but the game uses that limitation to tease you about what might be coming up on the horizon. If you look at your map, there might be an odd shape that’s just outside of your line of sight on the edge of the fog. What could it be? A mountain? A building? It’s so tempting to find out! 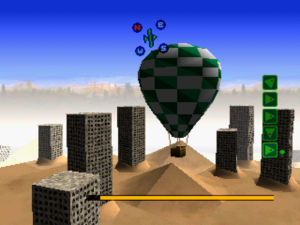 Is Breezy Earth a glimpse into our future? Or just a neat backdrop for a balloon ride?

There are three levels to fly around in Kaze no NOTAM. They barely make sense as real, contiguous places, but that makes them so interesting to explore. In the level Drafty Valley, you look down over a castle village, just a short distance away from an intricate forest maze. In Windy City, you float above the buildings and railroads of a bustling seaside city nestled inside a mountain range.

The most unexpected of the three levels is Breezy Earth – a post-apocalyptic planet, divided between the ruins of an old society and a futuristic utopian city walled off from the decaying world around it. What happened here? There are so many signs of a bigger story: a wrecked spaceship crashed into a lake, and a Kowloon Walled City-esque factory complex out in the desert. Why are we out for a leisurely balloon race when human civilization appears to have collapsed? Isn’t it hard to focus on reaching your target when there’s this mysterious wasteland out here?

Taking the scenic route isn’t just something that happens by accident; it’s the most fun part of the game. In that way, the game shares something in common with an earlier title developed by Artdink, the underwater game Aquanaut’s Holiday, where the joy of exploring the ocean is more important to the tone of the game than your actual mission is. Kazutoshi Iida, the director of Aquanaut’s Holiday, said in a 1996 interview that this open-ended, freeform style of game was part of the “lineage” of Artdink as a company. Kaze no NOTAM would seem to continue that tradition.

The game sets the mood before you even set foot in a balloon. The cover art and title screen were illustrated by Hiroshi Nagai, an artist who specializes in paintings of sun-kissed cities and coastlines that feel like a late afternoon in the summer. Appropriately, Nagai’s artwork became a fixture on the cover of Japanese “city pop” albums, a 1980s music trend associated with laid-back, upbeat grooves and the budding Japanese leisure class. By the time Kaze no NOTAM was published in 1997, the 80s Japanese economic boom and that opulent cultural style would have been long in the past. Putting Nagai’s art front and center makes a statement about what this game is meant to be – like a memory of the city pop era, sunny, breezy, wistful, and all too fleeting.