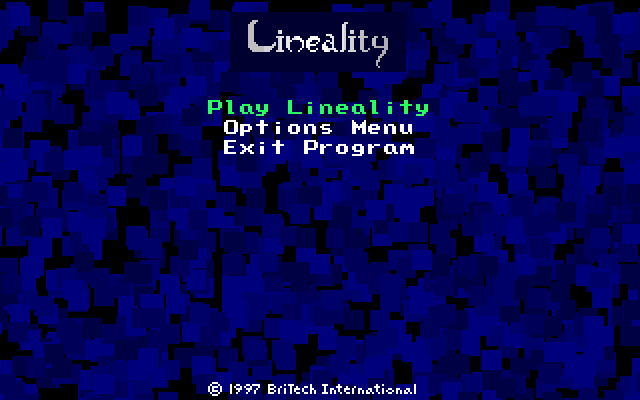 If you’ve been to a gaming event in the past few years, you might have seen Line Wobbler, a game that creator Robin Baumgarten calls “a one-dimensional dungeon crawler.” Instead of using a conventional screen, Line Wobbler is played on a string of LED lights, which can be curved or shaped around wherever it’s set up. It’s a really fun experiment that’s surprisingly clever and nuanced for a literally one-dimensional game.

Lineality comes from Hamster Republic, a website run by James Paige where he put software, stories, art, Elvis jokes, and whatever else he was working on. (Frequently, they featured his character Bob the Hamster.) His biggest project was the Official Hamster Republic RPG Creation Engine, a free DOS program that helped users make Final Fantasy-style role-playing games; he also shared a whole bunch of miscellaneous games, programs, and tools, like a Street Fighter parody called Sidewalk Fighter II.

Hamster Republic was always at least a little tongue-in-cheek, and that’s certainly true of Lineality too. Basically, take a non-descript, shallow action game and flatten it down to one line. You control a yellow dot, and you shoot at enemies (magenta dots) that come at you endlessly from both sides. When they die, they drop flashing pixels that represent new weapons to pick up. That’s it, forever. As promised, it is a one-dimensional experience.

The whole thing is pretty ridiculous, and the game recognizes that. Your character yells lines like “Die, pixels, die!” in an unsuitably grim tone. One of the game’s options makes the 1D line spin around in three dimensions. There’s also “depth mode,” in which you view the line head-on as a single pixel. It’s completely unplayable this way. The game makes a total mockery of the idea of a one-dimensional game, like it’s automatically an absurd choice. Which it is!

One line. One hero. One mission.

I’d have to imagine those options are included because James Paige figured out how to do simple 3D and tossed it in for fun. It’s probably the same reason Lineality exists at all – doing it for the sake of doing it because it sounds funny. It isn’t supposed to be good. It’s an experiment that purposely misfires.

It does inadvertently have one great idea: Sounds can help fill in the gaps in information missing from the visuals. As with everything else in Lineality, the voiceovers are silly. But your character also shouts out the names of the weapons they pick up, which otherwise aren’t visible. By default, you’d expect a pixel-y one-dimensional game to have lo-fi sound effects, like Line Wobbler does. Audio is a dimension that hasn’t been flattened, though, and it can add a layer of detail that explains what’s happening.

In this case, any useful piece of design is an accident. If anything, Lineality was trying not to be successful.