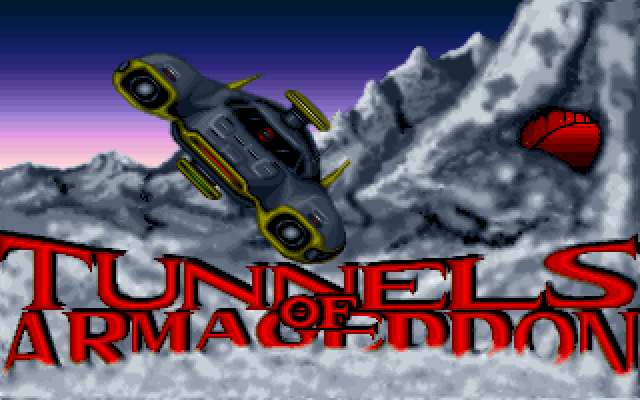 A game that’s not complacent with a generic idea deserves credit for pushing itself, but Tunnels of Armageddon shows how that might not actually contribute anything. The game throws in lots of caveats and layers in search of some depth for its decent obstacle-dodging action, but amazingly, none of it really affects the game at all, positively or negatively.

You play as a pilot who, on a mission to Antarctica, discovers an ancient alien installation under the ice. The base awakens and starts a countdown to destroy the planet. (Hence, Armageddon.) This is a test to humanity: if you can fly through to the center of the base in time, the aliens will spare Earth and grant humans the power of interstellar travel. The correlation between going fast and humanity’s worthiness to inherit the secrets of the galaxy is suspect, but surely the aliens know what they’re doing.

As is understandable for a game from 1989, Tunnels of Armageddon struggles to present the first-person motion needed for its premise. The tunnels look quite alien and pass into boxy psychedelia as you move inward, but everything within them is often unparsable. The black square of the horizon looks identical to some walls – a navigational nightmare – and glyphs indicating different alien objects are difficult to distinguish. Tunnels have progressively difficult layouts that remove floors or add small barricades to hop over, and the limited view window can’t render those changes clearly. This marks an occasion where a game’s low-fidelity hurts the experience rather than being a historical stylistic difference. 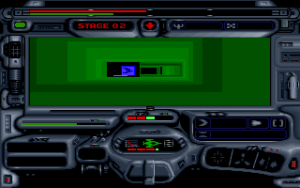 It’s colorful, whatever it is

Once you decipher what’s happening, the game puts up a good challenge by demanding quick reaction to shifts in the course of the tunnel, as it should. It also reveals how densely it likes to fill the margins of that concept with a slew of distractions.

The game races alongside you, opening fire from sentry turrets if you fall behind; as you take damage, parts of your vehicle, like your mobility or aim, will fail in chaotic ways. To catch up, you can shoot the base’s generators to slow down the rolling alarm system. So along with walls and forks in the road, you have to destroy alien weapons, manage the stability of your ship, and collect powerups that make your job easier (some in inconvenient places).

All these additions push the game beyond being a simple run through a tunnel, but does it really need that? The extra bits and bobs to worry about don’t necessarily improve or detract from Tunnels of Armageddon, just stack more atop it. In a game that always moves forward, the hard-to-see differences between three types of alien guardians don’t matter too much. Keeping track of two separate ship health meters (energy and stability) feels redundant, though it never takes your focus away from the path ahead.

Tunnels of Armageddon is perfectly alright as a mad dash against time – challenging but occasionally frustrating, visually messy but stylized, and the right length to be worth completing. Everything else can be safely ignored. Sometimes more is… just more.