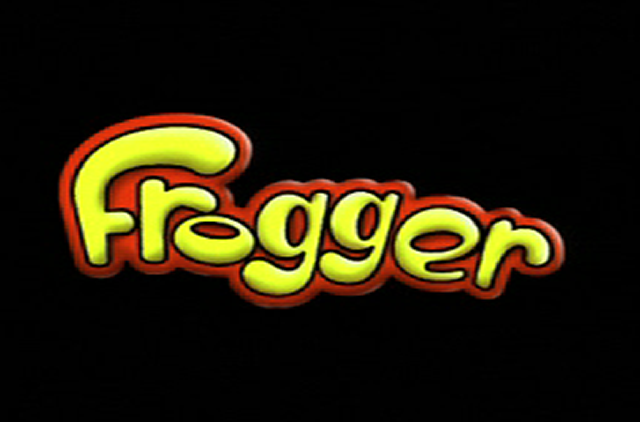 The 90s reboot of Frogger kicks ass. I swear to god. This game is great. As great as Frogger can be, anyway. It’s like someone took the original and injected it with shark hormones.

Hyperbole aside, the Frogger remake (occasionally subtitled Frogger 3D or Frogger: He’s Back!) is easily the best in the series. It expands upon the original in clever, interesting ways without betraying its roots or stretching the formula to absurd lengths.

Of the most noticeable changes, Frogger adds a vertical dimension to the series and makes the stages a little bigger. This means that the classic highway level is larger and packs a bit more visual punch. The game proceeds as normal and plays identically, but within a few minutes, Frogger abandons the city setting entirely and moves to a swamp. These new stages have you navigating a series of islands and ponds, riding on logs to travel between them. As the rest of the nine (!) worlds progress, Frogger gets himself caught in a sewer, a cave, a tropical island, and other bizarre locations.

Frogger really shines once these other areas show up. The factory level might be the best example of this. In addition to navigating mazes of shifting platforms, you have to trigger switches to solve some simple puzzles. It’s a delightful mess of reorienting the camera and situating your frog buddy in 3D space in such a way that won’t drop you into a pool of lava. This is typical fare for something like Zelda, but for Frogger, even the concept of a puzzle is a light-year of progress. 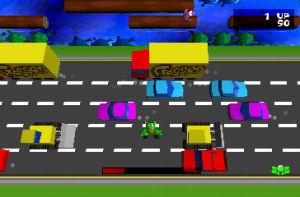 Same as the old frog

Best of all, the game does this without altering any of the underlying mechanics. The only two major additions are a super-jump button and the ability to eat flies for bonuses. Sure, requisite gimmicks pop up one in a while (like speed powerups and an automatic “skiing” level), but apart from that, it’s the same. Frogger still even moves in a grid pattern. The controls respond startlingly well, but the grid movement occasionally runs into problems with complex scenery and moving platforms.

A comparison between Frogger and old-school arcade games is probably fair, mostly because the game is based on one. Given the limited number of lives, the quarter-sucking difficulty can be maddening but also a load of fun.

The art style and aesthetics deserve special comment. Frogger‘s cartoony visuals imbue the game with a sense of character that previous games lacked while injecting some appealingly retro blockiness. The PlayStation’s graphical limitations probably influenced the solid-color design, and its larger storage capacity probably gave the developers an excuse to throw in the soothing soundtrack that cribs equal parts from arcade noise and ambient music.

The tacked-on multiplayer versus race mode is also an appreciated addition, even if it just acts like a glorified stopwatch. Much like the rest of the game, it’s exquisitely functional without overstepping its ambitions.

You really have to wonder why developers turned the later games in the series into faux-fantasy Frogger and the Quest for the Golden Treasure debacles. Without adding any kind of platforming gimmickry, characters, story – or really retooling the gameplay to any degree – the team behind Frogger assembled the franchise’s definitive game. It’s perfect. There is nowhere else this formula can go. Let’s stop here. Please.