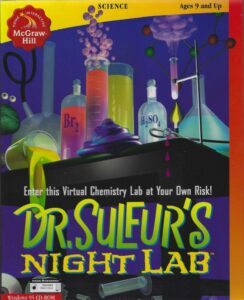 Science is a tough subject for an educational game. Looking at a sample of edutainment games from the 80s and 90s, I’m willing to say that a large portion of them are about math, maybe because math is easier to randomly generate. The math action-adventure game Troggle Trouble Math, for example, can automatically spin up an endless number of story problems by plugging numbers into a handful of templates. Language arts are a good fit for a computer game too, because it’s another reproducible subject that mostly happens on paper.

Compare that with science, a subject that benefits so much from hands-on experimentation that a computer game can’t necessarily supply. The best science lessons are the ones where students get to mix liquids together or play with magnets or set things on fire. In fourth grade, my science teacher did an experiment where we had to identify sugar, salt, and flour by taste alone, and as hokey as that was, it’s stuck with me for two decades, so he must have been onto something. It’s more challenging for an educational game to reproduce the value of an exercise like that.

Last year, I talked about MECC’s Science Inquiry Collection, which taught scientific subjects — like water quality or dental health — through an investigative process. This is, I think, the right way to do it. But compared to math games that can infinitely generate math problems, there’s only so many types of unique investigations or experiments that developers can reasonably fit into one science game.

By that measure, Dr. Sulfur’s Night Lab might be the most ambitious science edutainment game I’ve ever encountered. Released by textbook publisher McGraw-Hill’s short-lived computer game division in 1996, Dr. Sulfur is a game about chemistry. And to achieve that, the designers tried to recreate the joy of playing around in science class.

In this game, you’ve been drafted to help the mysterious Dr. Sulfur, whose extravagantly designed science lab (resembling what an elementary school kid imagines a cool science lab looks like) has been attacked by a horde of genetically engineered mutants (sure!). Your task is to repair Dr. Sulfur’s lab by solving chemistry problems that conveniently tie into the game’s learning objectives. Dr. Sulfur has team of freaky assistants who each specialize in a different type of matter, like acids, bases, and metals, and they have activities to complete that require your knowledge about chemicals and their physical properties, how they interact with other compounds, and how they’re used in everyday life. 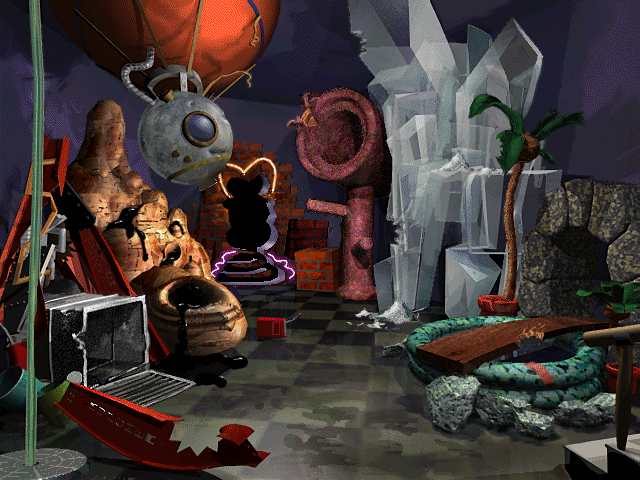 The box for Dr. Sulfur’s Night Lab gives a recommended age range of 9 and up, but I’d imagine the target audience is closer to late middle school. This is not simple or accessible content. The game’s exercises vary in complexity — some of them are matching games, others are more elaborate chemical puzzles — but they never talk down to the player. They deal with head-on with unintuitive concepts like molecular bonds, and they assume a baseline knowledge about chemistry that could be tricky for kids to pick up mid-game. They feels like they were designed as a supplement to chemistry lessons, not as a way to learn about it on their own. Yet despite the heavier subject matter and the vivid, creepy realization of Dr. Sulfur’s crazy laboratory, it’s all the more unusual that Dr. Sulfur plays like any run-of-the-mill kids’ game from this period, featuring wacky characters with wackier voices and arbitrary learning activities, shoehorning in unrelated  subjects like music in an attempt to appeal to a wider audience. 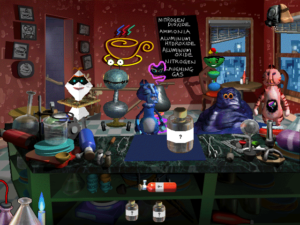 Meet Dr. Sulfur’s assistants. They each specialize in a different type of matter and they all talk a little too much

The real game-changer, though, is the game’s chemistry lab. While Dr. Sulfur’s Night Lab doesn’t draw too much attention to this, one of the rooms in Dr. Sulfur’s headquarters is a chemistry lab for conducting experiments, and it contains a fully featured chemistry simulation. The developers at McGraw-Hill managed to program how every single chemical in the game interacts with every other chemical, to such an extent that you can use it to replicate real-life science experiments. It’s such a big undertaking that I didn’t believe it at first.

The lab comes decked out with beakers, pipes, burners, scales, fans, eyedroppers, and whatever other equipment you need to play with the 117 chemicals in the game’s inventory. Dr. Sulfur provides a list of sample experiments to conduct, ranging from innocuous science fair staples like making a vinegar-and-baking-soda volcano, all the way to the incredibly dangerous exercise of making TNT (!!!), something that would never ever ever be allowed in schools. (The game reminds you not to try these experiments at home, and not to try the most dangerous ones anywhere. “You have to wait until you’re a grown-up to destroy things!” Dr. Sulfur’s assistant explains.) You’re not limited to the built-in experiments either; if you want to mix methane and sulfur over an open flame to make a poisonous gas from the safety of your home, you could do that, if you really wanted to.

Could they really have accounted for every property of every chemical? To test how far the simulation goes, I tried to recreate a dangerous experiment that you might see in science class: making nitrogen triiodide, a highly volatile contact explosive. (Thanks to my brother for showing me videos of nitrogen triiodide blowing up when I was in high school, which is the only reason I remembered this.) I found a guide for science teachers about how to create nitrogen triiodide and followed it to the letter in-game, setting up a ring stand with filtered paper and using the exact mixture of chemicals described in the instructions. Sure enough, it worked! It left behind a dark, volatile powder that detonated on the slightest touch. I was shocked that the game bothered to include such an obscure reaction that’s not part of the built-in exercises. 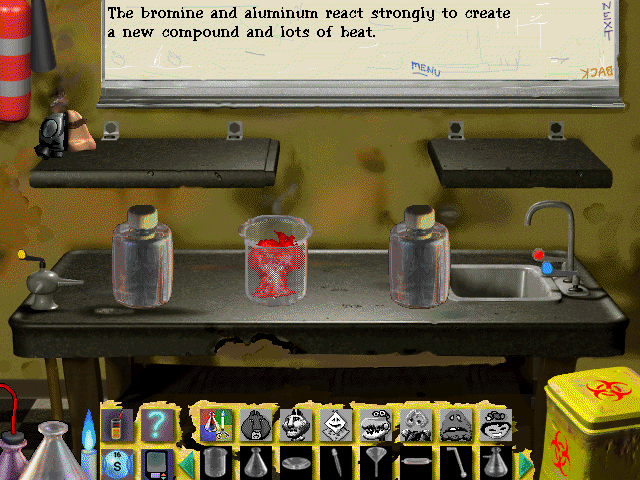 Don’t worry, Dr. Sulfur’s lab has an “invisible shield” to keep you safe from the virtual flames

This is unbelievable! From the cover art, Dr. Sulfur looks like it’s going to be like a mad scientist toy playset, oozing over with colorful fluids without actually teaching you much. But this is the real deal. I mentioned earlier that science education games are limited by how many different investigations or experiments they can fit in. Dr. Sulfur is the rare game that breaks this rule. Nothing can fully replace an in-person experience, but Dr. Sulfur‘s simulation of chemistry is so thorough that it could be an acceptable substitute for doing simple experiments in science class. That is an huge achievement. I can’t think of any other educational game from the CD-ROM era that even comes close to this in scope. 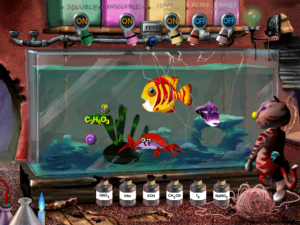 Sourpuss needs to balance the chemical levels in her aquarium, one of the many activities to pull you away from the chemistry lab

So why does the game treat it like a side attraction? Players are required to do a handful of sample experiments in the chemistry lab in order to beat Dr. Sulfur’s Night Lab, but the game quickly leaves it behind to spend more time with Dr. Sulfur’s wacky assistants, with their long-winded stories and awkward chemistry-inspired activities. If the lab serves any functional purpose for the rest of the game, it’s only to serve as a reference catalog about chemical compounds for players to use in other activities. This lab portion of the game seems to be intentionally open-ended for kids and teachers to make their own experiments, and while that’s appreciated, it also means that the full extent of the lab can be easily ignored in a game built around activities and objectives.

(As a caveat, I did not have access to a physical copy of this game. The game’s manual might emphasize the lab more, but either way, it’s not something that comes across in-game.)

(UPDATE 2/23/22: @ArcOnInternet on Twitter says the game’s manual does not include any additional experiments! Unless there was a detailed teacher’s guide, it really does seem like the game barely acknowledges the full breadth of the lab.)

It’s baffling to me that Dr. Sulfur’s Night Lab doesn’t recognize its own strengths. There’s an entire chemistry lab simulation on this CD-ROM! Whole other titles from his period have tried to be interactive science labs, like Maxis’s Widget Workshop or the Discovery Channel’s Invention Studio, and they still didn’t accomplish what Dr. Sulfur gets away with in, effectively, a side room. Why is this not the focus of the entire game? The credits for Dr. Sulfur list separate but overlapping teams for “Activity Content” and “Chemistry Content,” suggesting this game might have been built by committee, like there was a mandate to include a certain number of distinctive exercises and learning goals, like it was one of the textbooks McGraw-Hill was accustomed to publishing.

What a remarkable near-triumph. Dr. Sulfur’s Night Lab contains one of the most accomplished science education tools from the CD-ROM era, and it’s hidden inside an educational game that, on the surface, looks like it could just be any other piece of software that had trouble turning science class into a computer game.