When a re-release gets unreleased 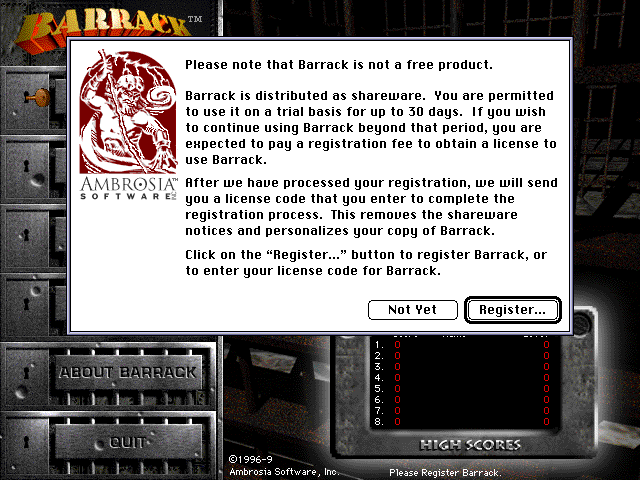 The registration reminder screen from Barrack. There’s no way to register it anymore though

One of the post tags on this blog is “still sold,” which I use to indicate games that are still commercially available in some form. Usually, the games were re-released on a digital platform like GOG.com, or they’ve been ported to mobile. Occasionally, they’re still sold through the original developer’s website. It’s worth supporting developers and publishers who go through the effort to make old games available and working on modern platforms, even in cases where the rights might have been snatched up by some larger publisher.

From time to time, I’ve gone back to older posts to add the “still sold” tag them, like Lighthouse: The Dark Being, which was officially re-released a few years ago. But there’s also an alarming movement in the other direction – games that go back out of release.

Ambrosia Software, the long-running developer of over-the-top Macintosh games like Barrack and the cult hit Escape Velocity, silently went out of business at some point in the past few years. Ambrosia had still been selling versions of their games for more recent versions of the Mac operating system, but they stopped filling orders around 2017 and have now finally shut down.

Star Wars: Pit Droids was re-released as a mobile game in 2012, but that’s gone now too. It may have been removed when Apple purged old apps from the App Store. That’s a preservation crisis on its own (“I felt a great disturbance, as if thousands of games suddenly cried out in terror and were suddenly silenced…”), but Disney might have let it lapse on purpose or removed it from sale while they were cleaning house on the Star Wars franchise, just like several other Star Wars games have quietly disappeared too.

One of the most troubling examples is a collection of games by the French studio Silmarils, released by DotEmu in 2009. The Silmarils Collection was the first time many of these games (like Transarctica) had been available in over a decade, but at some point, the website stopped working, and eventually it went offline entirely. DotEmu is a publisher that specializes in updating and re-releasing old games, including titles as major as the Final Fantasy series, and not even they kept the Silmarils Collection online.

Things go out of release all the time. I work with media collections at a library, and this week, I was surprised to learn that a major publisher of educational films decided to discontinue all DVD sales last year. It happens with any kind of media, but it’s especially common for games. The market, the industry, and the platforms are volatile. Rights ownership changes, companies go out of business, and platforms like Android and Windows are continually being updated and breaking compatibility with old games, and it’s often not worth it for companies to keep their games on sale anymore. Would it have been worth Disney’s time and effort to make Pit Droids work on the newest version of iOS? Who would actually buy it?

Re-releases are important. They make it easier for an average person to play old games, but they don’t last forever. Even good stewards like Ambrosia Software will call it quits eventually. The games that are on sale today will disappear when their digital sales license expires, or a website goes offline, or nobody cares about selling it anymore.

Keeping games commercially available is a challenge similar to digital preservation. It’s never something that’s done just once. It’s an ongoing action that needs attention to maintain, and that won’t always happen for less notable games. That’s why the dicey world of abandonware is necessary to fill in the gap. Despite whatever copyright issues, when games go out of distribution, it’s the most viable option; Macintosh abandonware sites are keeping Ambrosia’s games around now that the company’s gone. But that opens another set of problems with having to learn how to configure emulators, if they’ll even work with the games in question. (Ambrosia’s Centipede-inspired game Apeiron uses mouse control in a way that the Macintosh emulator SheepShaver can’t handle.)

It’s a great frustration that game availability can be so unstable that it toggles between those two options: official or unofficial, sanctioned or unsanctioned, working on modern devices or left for players to figure out for themselves.