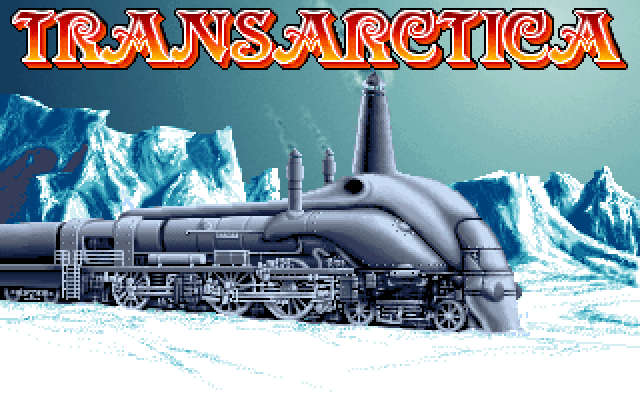 We can’t talk about Transarctica without mentioning Snowpiercer. According to unsourced internet descriptions, the game was inspired by the French novel series La Compagnie des glaces, though it immediately calls to mind the images of Bong Joon-ho’s apocalyptic 2013 action film and the French graphic novel it was based on.

They all start from the same place. An experiment to combat climate change leaves the earth in an ice age. Centuries later, with cities collapsing, the world’s last surviving infrastructure is its railroads.

In Transarctica, it’s a network of railways, managed under the profitable tyranny of the Viking Union. No one remembers the sun, and the Union likes it that way. From old books, your character learns about the failed climate engineering experiment – and another project that could reverse the damage. All you want now is to see the sun. The Viking Union wants you dead.

The mission is bleak. Long stretches of nothing are punctuated with violent loss. You rarely know what direction to head in and could feasibly go in circles for hours. And still the journey has a sense of fierce dignity, of perseverance and hope despite the evidence – though that’s undercut by a bad moral compromise you’re supposed to accept. 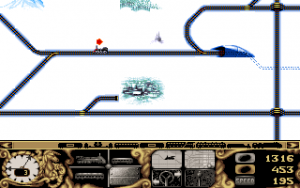 Crisscrossing railroads cut a line through the otherwise barren surface

Transarctica is primarily a resource trading game in the vein of simulation games with pirates or privateers. Although most of Earth has been buried under ice for centuries, a few dozen cities have hung on as trading posts. Buying several tons of commodities and shipping them hundreds of miles will net you profit of lignite, a coal fuel that doubles as the world’s de facto currency. Usually, you don’t want to burn it. You need that money to fund your expedition: shuttling between towns provides an opportunity to listen to gossip, read ancient newspapers, or look for unmapped secrets on the railways that may lead to the sun.

Traveling takes forever. Trading takes forever. Exploring a fork in the railroad takes forever. To move the train, you order the boiler crew to shovel coal into the engine – not all of it, just enough to get going – then wait for the temperature to rise. Each remaining city has limited inventory, so if you want to buy, say, a missile launcher, only one town carries them, and a different town will arrange where to place it on the train. (The game’s manual asks you to keep track of towns by writing them down in a notebook, but honestly, a strategy guide to the cities really improves the game. It feels more like an epic voyage where you have to consult a chart.)

Every decision takes considerable time to see through. Not in-game time, which you can speed up, but the time in real life that you have to dedicate. 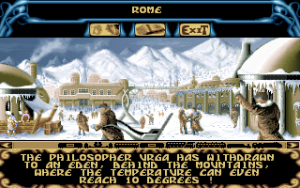 Then randomly, in transit, an alarm will sound, and a Viking Union train will attack. Battles between trains resemble ships fighting in the ocean, passing each other on parallel tracks and lobbing shots back and forth. To finish the job, soldiers can board the enemy train and, while fighting off other troops, plant TNT to detonate the cars.

These battles are an absolute slog. Soldiers plod across the snow between the rails, and their deaths are inevitable as they gradually wreck the trains. (I frequently had issues getting soldiers to lay TNT too. Shockingly, the game includes a much-welcome option to skip fights entirely and simulate their outcomes.) Although you get to loot supplies from the Viking Union for winning, a train fight never feels good, just draining. Right afterwards, you’re right back to the railroad to find another mine to quarry for fuel. Hopefully it’s the kind of fuel that isn’t also a currency so you don’t feel guilty burning it.

Even once you’ve found more information about the sun, there are no clear goals and no visible way to achieve them. All that remains is drudgery. If you aren’t listlessly bouncing between cities to earn money, you’re managing losses from combat or explosive railroad traps or underground cannibals or a fucking wolf attack or something equally awful. 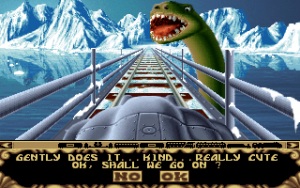 Gasp-worthy events like a run-in with the Loch Ness monster (!) will interfere with travel

And yet there’s hope. Maybe it’s the triumphant music that plays over the world map – or maybe the look of determination of the old man in the train’s war room. You and your crew are on an adventure to find a source of life on a dying planet, and that means something. To keep the faith, the mission must continue. The game centers on the desperate image of a train crossing the barren world, stopping from city to city, no destination in sight, pursued by a war train, detonating the track behind it to stay alive to chase an impossible dream.

With that said, the optimistic mood has its limits because you can enslave people.

Throughout the game, your train has to perform heavy labor, like repairing broken tracks and mining coal. You can round up mammoths to haul equipment, buy a crane, or, more cheaply, enslave soldiers from the Viking Union after you blow up their trains. The cannibals who live underground can also become your slaves, or you can buy them at slave markets. You never need to use slaves, but they help.

Like many older games, Transarctica focuses more on its strategy than its narrative. That’s alright. But that means it isn’t too concerned about what it means to have slavery in this setting; it treats it as a mechanic to add variety to the game. It doesn’t sit right to be on a search for hope while enslaving hundreds of people to mine coal. The frozen wasteland is filled with necessary violence, and getting in on the slave trade still feels like a step too far.

A sense of determination gives a game like this its stamina. Beneath its good spirits, Transarctica is a desolate trudge. That seems to have been the goal, and it certainly delivers on the promise of a world without light.