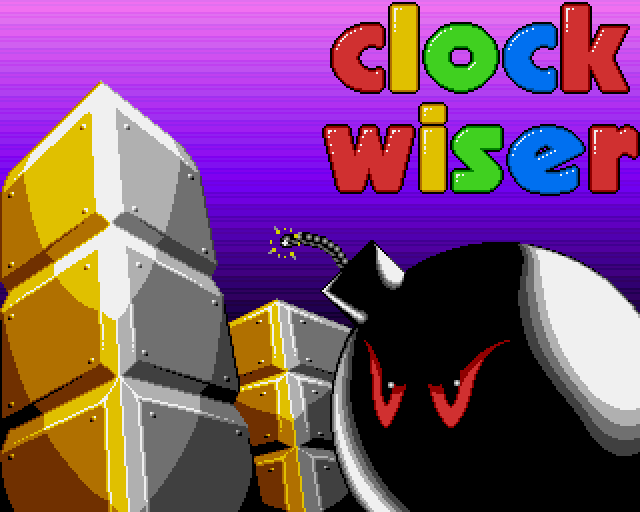 Title screen from the Amiga version of Clockwiser, courtesy of Lemon Amiga.

A few months back, while I was revisiting a game I’ve written about previously on this blog, Lighthouse: The Dark Being, I had to think once again about 15 puzzles. If you’ve played an older adventure or puzzle game, you’ve probably run into a 15 puzzle. It’s a 4-by-4 grid of numbered tiles that have been mixed up and need to be slid back into their starting positions. It’s a stock puzzle type that gets repeated frequently in these types of games, and it’s almost never interesting. Solving a 15 puzzle is more of an endurance test, or a sponge meant to soak up the player’s time.

Even though it’s not an inspiring puzzle format, 15 puzzles do have a hypnotic sort of logic. If you want to slide a specific tile back into place, you need to move the pieces around on the board in a circular motion, making a long chain that you can slip another tile into, like a car merging into traffic, and gradually circling them into place. It’s surprising how quickly your brain can slip into these patterns, making and breaking loops as you try to finesse that one last tile into position.

Playing Clockwiser reminded me of 15 puzzles again, but for a positive reason! It’s a puzzle game built entirely around the idea of moving tiles in a loop, and it shows what else can be done with that basic idea. 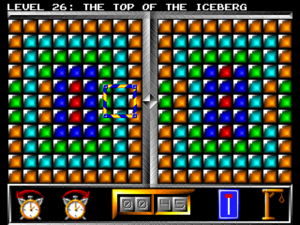 Each level in Clockwiser presents you with two grids of colorful blocks. Your goal is to get them to match. You can move the blocks on the left-hand side by drawing a rectangle on the board, then rotating the pieces around it like a conveyor built. Some levels have a tight time limit, but for the most part, the game gives you all the space and time you need to get the pieces in the right position.

It’s a bold-looking game, and that’s almost enough to carry it for the first few levels.The art style of Clockwiser goes overboard on high-contrast gradients in way that makes everything in the game look like gemstones, glowing from the inside. Three decades removed from the novelty of high-color, low-resolution DOS graphics, it looks a little garish, but the overwhelming shininess is a great match for a game about lining up colorful shapes.

At first, it reminded me a lot of those 15 puzzles, finding the most efficient way to move tiles across the board in these circular motions. But starting on level 4, the game throws in a twist. Up to this point, you’ve been working with levels that are totally solid with blocks, like the board in match-3 game. Suddenly, there’s empty space on the board, and Clockwiser reveals that the blocks are affected by gravity. It’s still a puzzle game about moving tiles around in a loop to get them in the correct positions, but now there’s another dimension in play. Now you’re using the loop mechanic to stack blocks on top of each other, or maneuvering them to drop down in the right places.

It feels like the mechanics from the game you’ve been playing for the past three levels have been ripped out and transplanted into a totally different game. It’s jarring at first, but that same hypnotic logic quickly kicks back in. After enough time with Clockwiser, I could look at a rectangular loop I drew on the screen and intuitively know that “clockwise” was “up.” 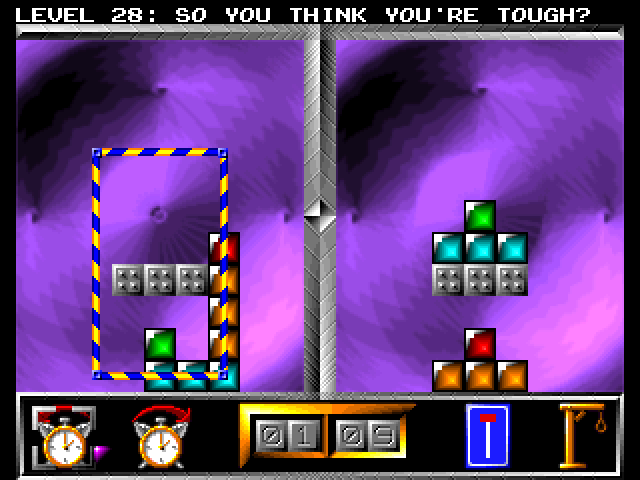 There’s a limit to how much Clockwiser can do with this format. As the game wears on, it throws in more gimmicks, like ultra-short levels that have to be solved in a single move, or bombs that you can strategically drop to remove other blocks from the level. The bombs are a great addition, especially in the levels where they have to be carefully moved away from each other to prevent a chain reaction. But you get a sense from some of the later puzzles that the game got its strongest ideas out of the way in the first half while the novelty was still fresh.

What stays true across every level is how satisfying to think in loops and circles, just completely shutting down the part of your brain that thinks about linear motion and letting Clockwiser briefly take it over.

Team Hoi, the studio behind Clockwiser, sounds like they had a string of terrible luck getting their games out in the world. According to a 2002 interview by Joachim Froholt with members of Team Hoi, the game’s publisher Rasputin Software never actually paid the developers for their work on the game. Lacking the funds and energy for a drawn-out legal battle, Team Hoi wasn’t able to take Rasputin to court. Clockwiser artist Metin Seven characterized Rasputin Software as “villainous,” but frustratingly, it sounds like this was par for the course for this poor company.

(Thanks to Joachim Froholt for sharing his interview!)

A day in the life of a puzzle block…

As an aside, Clockwiser opens with a short animation showing a block from Clockwiser going about its day. It’s extremely cute and a great way to open the game, so I can’t end this post without showing it off.