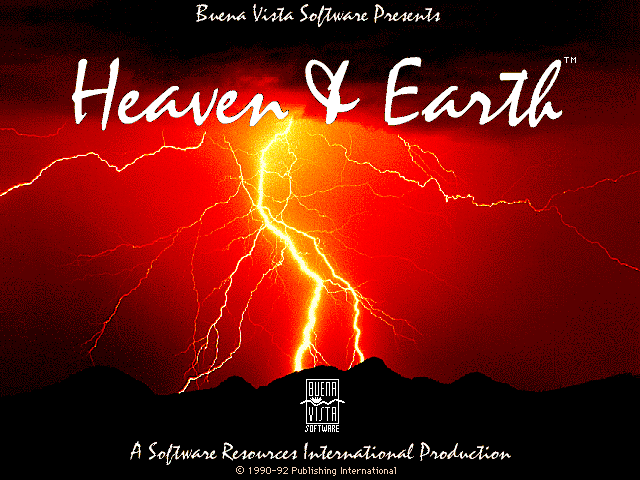 Why do we solve puzzles? Maybe we want that “a-ha” moment, when the solution becomes clear and we can suddenly see the whole picture of the complexities we’ve been dealing with. It imparts a sense of mastery.

Heaven & Earth gets something different out of puzzles than the satisfaction of beating a challenge. It finds peace.

The game is a triptych of meditative puzzles – a collection of spatial “illusions,” a Tarot-like solitaire card game, and an “animated toy” with a swinging pendulum. They play very differently, and in their own ways, they each embody the idea of searching for harmony with the world.

The illusions, like Sliding Graphics, emphasize transformation and change

Most of Heaven & Earth is spent with the illusions, an assortment of challenges that force you to look at shapes and patterns from unexpected directions. In the Fit Fall puzzles, you pack oddly-shaped blocks into small spaces. For the Regrouping puzzles, you arrange groups of straight lines into new, overlapping patterns. They’re about the relationship between filled space and empty space, shapes transforming into new forms. Every illusion approaches those concepts from a unique angle, and they constantly surprise and challenge you as they reveal themselves. As you play more, climbing from the Ocean levels up to the trickier Sky levels, the rules and structure of the illusions evolve.

The Antimaze illusions are a terrific example of how the game combines clarity and surprise. Antimazes have the opposite rules of a normal maze: you can walk through walls but not through open spaces. The mazes look like a random, meaningless jumble of lines at first. When you complete one, it suddenly becomes understandable, almost on a sensory level. You can visualize the solution so clearly – the path through the maze, the inverse image of the maze. Everything pulls into focus in one amazing moment. It happens after every puzzle, each presenting a slight variation on the theme.

But once you advance far enough, the game breaks its own rules. The walls become solid, and in the middle of puzzles, the game swaps back and forth between the rules of an Antimaze and normal maze. It surprises you all over again.

The joy of solving a puzzle in Heaven & Earth is the joy of finding balance. The mind-bending illusions put you in a place of uncertainty and confusion. Completing a puzzle is rewarding because it brings you stability. Look at the puzzle Gaining Losing, where you control multiple pieces at once, and to succeed, you have to allow some of them to fall away. It can be difficult to adjust to this new role and to fit into the odd spaces it gives you, both literal and figurative. Solving them is a process of personal transformation and acceptance, made explicit by the illusion concepts like Changing Bodies and Identity Maze. Success feels like an achievement, of course, and also something more profound, when everything clicks into place, when you finally come to rest and can see how you’ve adapted. It feels spiritual, like you found something bigger than yourself.

Heaven & Earth was designed by much of the same team (Michael Feinberg, Scott Kim, Ian Gilman) that later developed Seize the Day, a beautiful calendar program that also has spiritual, pseudo-mystical tones. Both feature powerful, animated color-cycling artwork by Mark J. Ferrari. Compared to the landscapes in Seize the Day, Ferrari’s art in Heaven & Earth is, like the game itself, full of patterns, shapes, and forms. It has a crystalline, shimmering style, iridescent moving pastels that evoke a rippling pond. Serene and hypnotic, the visuals perfectly amplify the game’s mood.

Ferrari’s nature art does appear in the card game. In that mode, across four rounds, the game deals out elaborately themed cards with different landscapes, seasons, elements, months, and sometimes “celestial phenomena” like a lunar eclipse, a double star, or a tornado. You earn points for matching similar cards. Although the rules have plenty of minor stipulations that take time to remember (four-of-a-kinds have the same month, more points for matching landscapes, etc. I frequently kept checking the help screen), you have the freedom to play around with different combinations of cards. I loved experimenting to find the best way to pair cards together. Do the night skies fit with the floral patterns?

The way the cards connect together calls to mind astrology, seeing patterns in nature and the cosmos. A high-scoring trick draws out the relationships between the earth, seasons, and the sky, like pairing months at opposite points on the calendar. Those connections are symbolically loaded. When you play strongly with the cards you’re dealt, you feel clever for figuring out the rules, and the world feels a little closer.

The pendulum game didn’t work as well for me. It’s more of a freeform mode where you guide a swaying pendulum into the pull of an “energy vortex.” It has the same calming, meditative roots as the rest of Heaven & Earth, but I could never get a handle on how to direct the pendulum around. The key may be to wait patiently for it to drift along its natural course and gently nudge it, but the odd controls frustrated rather than soothed me. It also doesn’t help that the position and movement of the pendulum can be difficult to read because of this mode’s rough 3D graphics. (In full disclosure, Macintosh emulators currently cannot play the pendulum game; I played the DOS version instead, which may have control and performance issues.) 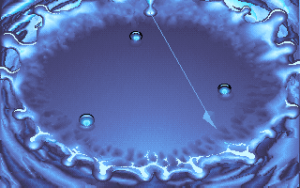 Heaven & Earth has a fourth mode too – the Pilgrimage, a gauntlet of the game’s challenges mixed together, intercut with motivational proverbs. (The second stage of the gauntlet offers: “True fearlessness is not the elimination of fear, but going beyond fear. Without fear there is no courage.”) One stage might ask you to get a high score with a specific hand in the card game, while another pulls out a difficult illusion. You can’t check the rules; the challenge is steep and lengthy. It definitely isn’t a calming experience anymore.

This mode reframes the puzzles as a test, intended to resemble a journey into the unknown. “You are on your own,” the game says, “armed only with the experience you have gained to take you forward on this journey and into your future.” It’s an interesting way to remix the game and put a new perspective on it. The puzzles are normally about finding comfort in adapting to change; instead, by running them back-to-back as a monumental challenge, they assess how much you’ve grown – and remind you to keep growing.

In all forms it takes, playing Heaven & Earth is therapeutic. It’s a tremendous puzzle game with a heart tied up in thoughts about identity. Through mindblowing, beautifully designed puzzles, it asks us to find equilibrium with the world around us.

The DOS edition of Heaven & Earth lacks most of the Macintosh version’s detailed color-cycling visuals, though it isn’t the oddest version: the game was also released for the Japanese FM Towns computer under the titles Steepia and Steepia Lite.