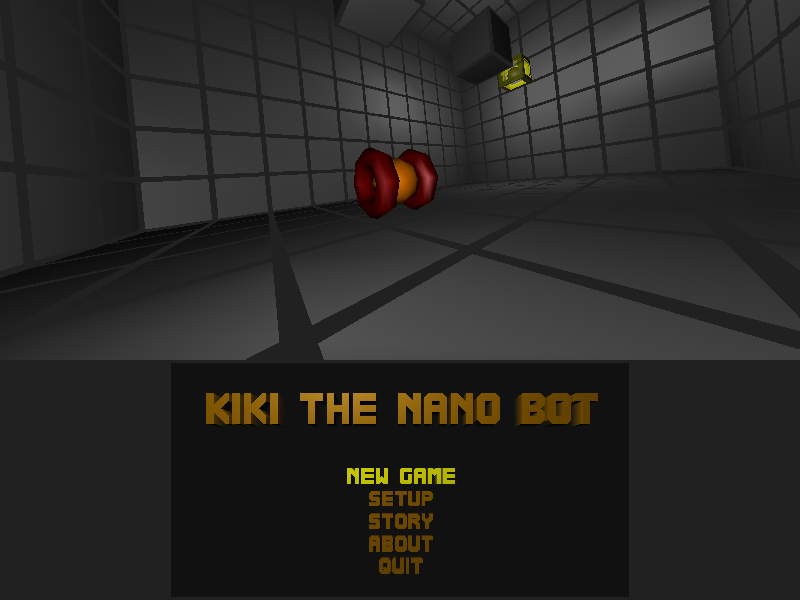 Deep inside a tiny computer lives a blobby little robot named kiki. kiki can glide around and jump and shoot pellets. And most importantly, kiki can make physics its plaything.

kiki the nano bot, a open source project by Thorsten Kohnhorst, has a brain-melting appeal best played rather than read. Describing kiki as disorienting doesn’t do justice to how alien it feels, as if it’s protruding in through another dimension. The game can be difficult to play straight, but its visual foreignness separates it from what a less risky game could do.

In the story, something has gone haywire in kiki’s computer and turned its friends into “lazy stupid robots who shoot each other.” So kiki has to put the world back together again, one room at a time. Each area in kiki has an exit that requires careful movement to reach; you also usually need to restore power to the exit by connecting gears or otherwise activating some machine. 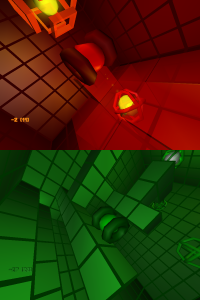 Forget about up and down

To get around, kiki can crawl along walls with its roly-poly tank treads. This also changes the direction of your gravity. If kiki climbs onto the ceiling and jumps off, everything stays upside-down. You can take advantage of this to navigate mazes, of course, or use it more creatively. You can reorient kiki to a new idea of “down,” then exploit that to fall through long gaps kiki couldn’t normally jump over or clamber up columns like they’re bridges.

The game’s gravity mechanic upends your relationship with space. Walls become floors, and floating blocks become miniature planets. The camera, though, obliterates any last hint of orientation in the computer world. It lingers and swoops, spiraling dramatically as you switch surfaces. Most of the game looks askew as it continually drifts towards your new perspective. This causes problems for figuring out where you are and where to go, especially on the more claustrophobic levels, but it liberates kiki from a sense of direction. (You can always switch to a more conventional, narrower view if needed.)

The computer world’s weird aesthetics push that disembodied feeling somewhere even more abstract. Each stage is bathed in a single, overpowering color, washing out detail and contrast. Yet as the camera whips around these scenes, it reveals their depth, making translucent blocks look like bursts of fog and the walls of rooms seem miles away. Everything is flat and expansive at the same time. It’s drowsy and nauseating, not because of motion sickness but because it feels like it defies three-dimensional space.

This will break your mind, and rightly so. kiki has a little more trouble putting the pieces back together into a new order. Every puzzle opens with a bold, single word appearing on-screen to hint at your solution – “ELEVATE” or “RINGS,” for example. These title nudges are great and just about equally scary and helpful; the obstacles that follow usually leave less of a formative impression.

Gravity shifts in jumping puzzles and block-pushing puzzles work better in theory than execution, because the game doesn’t have a good way to make its wild approach a little easier to adjust to. Judging distance or getting the lay of the land without a real directional frame of reference is tough. Compare that with a game like Antichamber, which sprinkles its full-throated spatial weirdness in degrees and doses so you can catch up with it.

On the other hand, maybe kiki doesn’t need to go anywhere after it blows up gravity. kiki‘s computer is so unusual to look at that being uncomfortable while solving it is part of the experience. This probably wasn’t the developer’s goal, but for a little game that tries some weird mechanics, kiki plays best as a head trip first.

kiki the nano bot won the 2002 uDevGames contest, a competition for hobbyist Mac game developers. uDevGames was started to raise interest in Mac game development, and every entry (including kiki) was released as open source for the community to learn from. Appropriately, Kohnhorst says feedback from other uDevGames members helped shape the game.