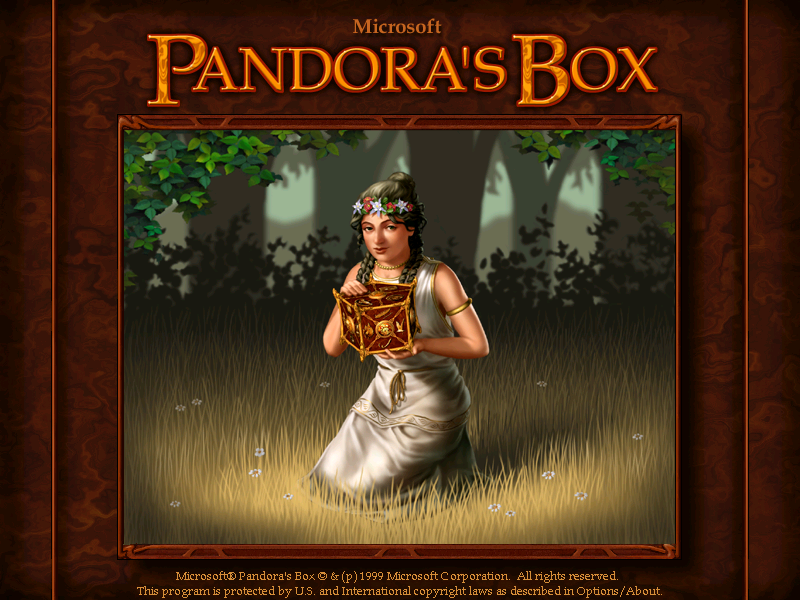 Here’s a odd thing: back in 1996, Microsoft hired Alexey Pajitnov, the creator of Tetris, to design puzzle games for Windows 95. Pandora’s Box was one of the games Pajitnov worked on with Microsoft, and it marks a surprising step away from the Tetris-style games that had characterized his work up to this point. Instead, it’s a visual puzzle game, defined by an almost archaic sense of wonder.

Pandora’s box, the mythical container of evil from Greek mythology, is reimagined here as a puzzle box, holding the spirits of trickster deities from various myths and folklore, like the spider god Anansi and Puck the fairy. The box has been opened, inevitably, freeing the tricksters so they may wreck havoc once again. As they scramble up the world, you embark on a globe-trotting adventure to re-capture them by cleaning up their disarray, literally putting things back in order.

This is explicitly a game about restoring order from chaos, which, come to think of it, may be the idea motivating the entire puzzle game genre. 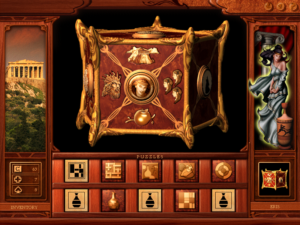 Eris, the Greek god of discord, is certainly having more fun now that she’s free from that old puzzle box

Pajitnov has worked on a number of odd titles over the years, including an aquarium simulator, but by and large, his career has been defined by abstract, endless puzzle games, like Tetris or Hexic. (Or Hatris, his bizarre follow-up to Tetris in which you stack hats.) By comparison, Pandora’s Box is a major departure in theme and format.

For one thing, it has an overarching structure. You’re not just solving puzzles for their own sake; you’re also searching for the missing pieces of Pandora’s box, which have been stolen and scattered around the world. There’s one in each city, hidden behind one of ten random puzzles, and as you find more of them, you can seal the tricksters back into the box. You also collect items, which can help you solve difficult levels or skip them altogether. This framing gives the individual puzzles a purpose, and it keeps you moving between them, never getting stuck too for long and always working towards a bigger external goal.

If you really wanted to, you could skip all this by playing just the puzzles by themselves in a separate “Puzzles Only” mode, but you’d be missing out on a significant part of the game. It’s meant to be a structured experience. Pandora’s Box is a treasure hunt, almost like searching for clues in Carmen Sandiego.

The game has a terrific time with the globe-trotting treasure hunt motif. From the soundtrack up, it channels an early-20th-century spirit of exploration, a bit naive (look, a foreign country!) but also churning with industry and a gusto for adventure. When you go to a new city – accompanied by an Indiana Jones-style flight path on the map – the game treats it with the same kind of wide-eyed tourism as a big-budget movie that’s filming in another country, presenting you with a scenic photo of the city and puzzles drawn from its history, art, and culture. (This is a celebration of art from around the world, and although done respectfully, at times it can feel like it’s just stealing artwork from another culture to make a cool puzzle.) This is played against the puzzle box aesthetic of the game, where the interface is made from intricately carved, polished wood that seems hundreds of years old.

Although Pandora’s Box isn’t an educational game, it feels like a successor to Microsoft’s MindMaze, the trivia game included with the Encarta ’95 encyclopedia, in the way it couches its thinking puzzles in antique pageantry. 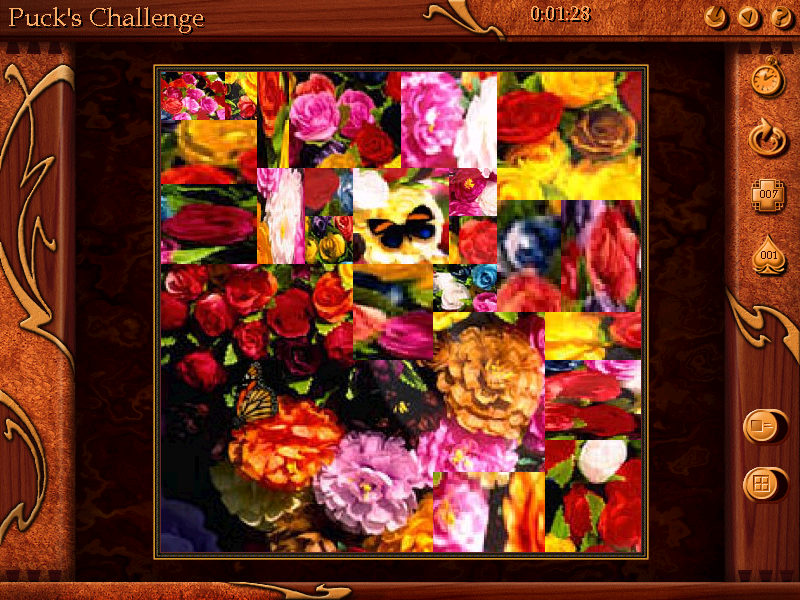 Photographs, artwork, and historical artifacts have been chopped up and turned into puzzles

The puzzles themselves are all visual, and as soon as you start the first one, it’s clear why Microsoft developed this game. It’s effectively a showcase for the capabilities of Windows 95. The pictures in Pandora’s Box get stretched, rotated, distorted, split up, put back together, and spun around in 3D, which wouldn’t have been possible a few years earlier. Windows 3.1, the previous version of the operating system, would struggle with detailed, moving graphics. But using the DirectX video libraries in Windows 95, you could pull off all sorts of visuals that couldn’t have been attempted in the previous generation. That’s not to say this game is a tech demo – it was released well into the lifespan of Windows 95, after the novelty would have faded – but it certainly feels like an attempt to design a game around what the developers could do now. 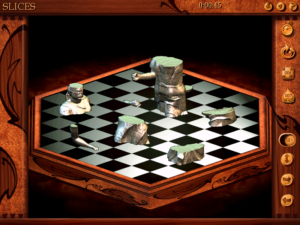 Put sculptures back together in Slices, one of my favorite of the ten puzzles in Pandora’s Box

(Pajitnov said as much in a press release for Pandora’s Box, stating that the game “take[s] advantage of computer technology by challenging players’ visual skills.”)

There’s ten types of puzzles in Pandora’s Box, each with a different angle on the concept of a visual puzzle. Several of them are in the vein of jigsaws or sliding block puzzles, but they transform the puzzle in some eye-catching manner. The best might be Focus Point, where the pieces can grow and shrink in size. Outer Layer, a puzzle that has you lay textures onto a 3D object, seems especially designed with showing off DirectX in mind. They’re not all winners: Lens Bender tries some gimmick involving magnifying glasses that warp and rotate puzzle pieces, but it never pulls together.

Even when they’re uneven, the puzzles are surprising, often thought-provoking, occasionally delightful, each clever in a different way, and the game benefits from their restless variety. There are so many different forms that chaos can take and ways to restore order from it. 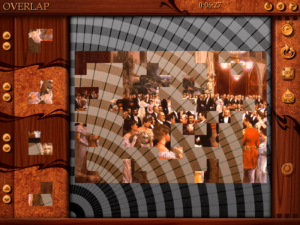 Distinctive features like human faces are your anchor in difficult puzzles

As you capture the tricksters, the difficulty level gradually rises until it reaches a point of saturation. The images get denser and busier, the pieces smaller and less distinctive, until they begin to lose definition, like a jigsaw puzzle so difficult to solve that you have to brute force the solution by matching every piece against every other piece. Eventually, it’s just guesswork. A few of the late-game puzzles have multiple layers, meaning you have to solve a mixed-up puzzle that contains the image of second mixed-up puzzle, up to three layers deep in the final challenge. These barely resemble any identifiable picture; there’s no sensible way to complete them without skipping them entirely. Even the most clever picture puzzles have a threshold where they can’t get any harder without being illegible, and the game knowingly crosses that line several times toward the end.

That’s why the game lets you skip puzzles. There are over 350 puzzles in Pandora’s Box, and you aren’t meant to solve every single one. By the time I finished the game, I had only done about 110. You’re expected to strategically pick which puzzles you’ll actually complete. It’s not a full-blown metagame with a plethora of stats and items to juggle outside the puzzles themselves, but there are shades of that structure, foreshadowing the sort of free-to-play mobile game where the actual content matters less than managing the systems surrounding it.

Pandora’s Box is ecstatic with all these possibilities for what it could be. Imagine a visual puzzle game that uses all the tools of this new operating system! Imagine that Alexey Pajitnov, who’s spent his career making puzzles confined to a small playing field, could design a game that’s a globe-spanning adventure! And what if it wasn’t actually about the puzzles at all?