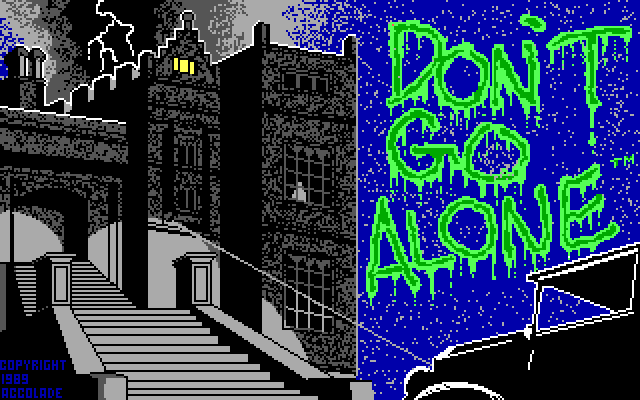 Haunted houses never get a fair rap. They might be cheesy and schlocky, but you’re getting what you pay for. Sometimes you just want cheap scares and creepy decorations.

So thank goodness that Don’t Go Alone doesn’t put up any pretensions. It takes place in a haunted house, and you fight ghosts. Doors burst open and scary things crawl out. There’s a fairly fun RPG here, even without the corny spookiness, and it does justice to the roadside attractions and B-movies that inspired it.

Supposedly, an evil force called the Ancient One has kidnapped your grandfather and taken him to the basement of an old mansion. You have to traverse ten levels to find and free him from the clutches of evil. Within the haunted house, you can bring a party of four with unique abilities and stats. Each one specializes in a different field that you’ll need in balance, ranging from technical skills for puzzle solving to psychic experience for controlling the undead.

The core game is a little unspectacular but serviceably fun. After entering the haunted house, your team has to navigate a seemingly endless maze of identical hallways and doors in search of a way to move further into the building. Usually this involves matching keys to doors, as well as a few other clue-driven puzzles with invisible walls or electric generators. Everything tends to look the same, but much like other dungeon crawl games, the pathways are interesting to navigate. 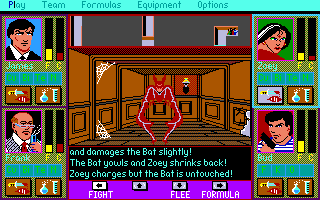 The exploration is broken up by Dragon Warrior-style combat scenes. Each area is populated with ghosts, spooks, and other ghoulish creatures that, rather than draining your party’s health, will scare them. (Health is measured in Fear, which recovers over time. It’s a clever gimmick. There’s no death, so if your fear gets too high, you’ll just reset to a random part of the mansion.) Victory yields some experience and loot, and combat tends to end early when enemies flee and rob you of random inventory items. The difficulty is forgiving, which makes the game an enjoyable, inoffensive breeze to play. Look elsewhere for a stiff challenge.

Don’t Go Alone‘s best original feature is its chemistry system, which party members craft spells and items based on formulas specific to those characters. Of course, other combinations can be found throughout the game in textbooks, and adding experiments to your journal is one of the game’s most gratifying bits. There’s a good variety of offensive, defensive, and special abilities, so balancing them and deciding which class uses what can be a treat. That said, mixing elements can be a confusing chore without a pad of paper; the periodic table does not easily lend itself to memorization.

In sticking to the B-movie horror schtick, everything escalates as the game reaches its close. Eventually you’ll have the ability to walk through walls and be armed to the teeth with bazookas and the inexplicably named “Blood Armor.” How delightfully uncommon that even a game a with horror theme doesn’t take itself too seriously to skimp on the campiness.

Come to think of it, you couldn’t find a much better description for Don’t Go Alone: delightfully uncommon. By no means does it break ground, but it’s breezy, fun, and spooky.