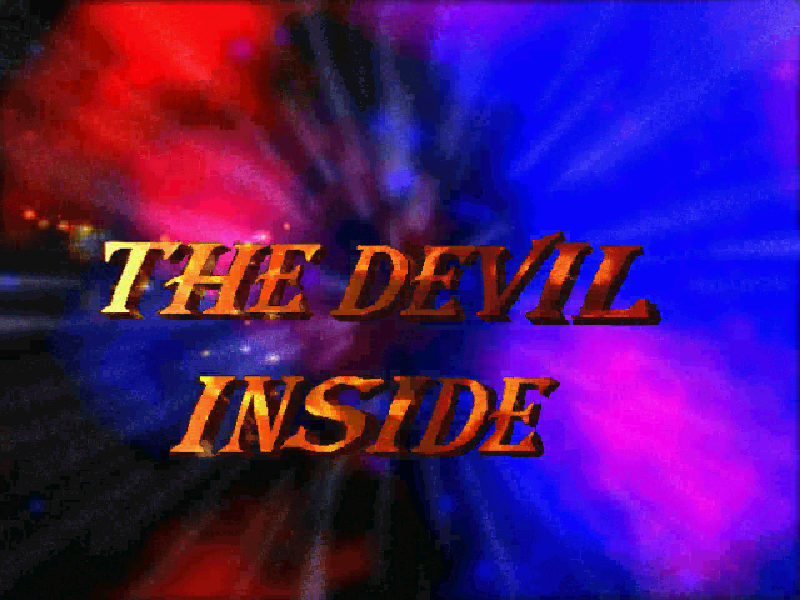 If you watch cable TV on the west coast, you’re probably watching The Devil Inside, a live paranormal investigation show on the WWWL@ network. In a world of race-to-the-bottom reality programming, The Devil Inside is your chance to see real murder – ghost hunters killing zombies and demons, like a gory, supernatural episode of Cops, while the Los Angeles studio audience cheers them on. It’s the network’s biggest hit.

Plenty of movies, games, television shows, and other works of fiction deal with the idea of watching sensationalist depravity as entertainment. When The Devil Inside came out in 2000, the concept was newly relevant. Reality TV was exploding; Survivor and Big Brother would debut in America that year. Audiences demanded more even as they criticized it. It was ripe for parody.

The Devil Inside looks like it’s going in that direction at first. The television studio is decked out in ironic glitz and brassy theme music, like a pre-apocalyptic Hunger Games. But once it gets rolling, it reveals itself to be a dingy horror game, one that embraces the exploitation themes you’d think it was joking about. 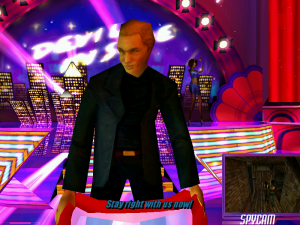 On this specific episode of The Devil Inside, the show’s top investigator Dave Cooper has been sent to hunt the living dead at Shadow Gate, an enormous haunted estate in the Hollywood Hills taken over by the ghost a notorious serial killer, the Night Howler, who was executed two years ago. WWWL@’s camera crew follows Dave behind the gates, up the hills, and into the claustrophobic halls of the Shadow Gate manor while our host, the unsubtly named Jack T. Ripper, demands more violence and greater risks to satiate his viewers.

Dave has a secret weapon against the undead: when he finds a pentacle, he can unleash the demonic spirit inside him and transform into the magic-wielding succubus Deva (an anagram of Dave). The studio audience screams for her when she emerges. She speaks an indecipherable Germanic language and unhinges her jaw to devour the souls of her enemies. While Dave has to worry about mortal concerns, Deva can intentionally set herself on fire to regain health. The game doesn’t do much with her apart from, disappointingly, having her split away and kidnapped in the last act of the story. But compared to Dave’s awful constant one-liner catchphrases and his terrible 2000s spiked haircut, Deva is the star of the show. (Dave/Deva are ready to be re-appropriated as a genderfluid icon.) 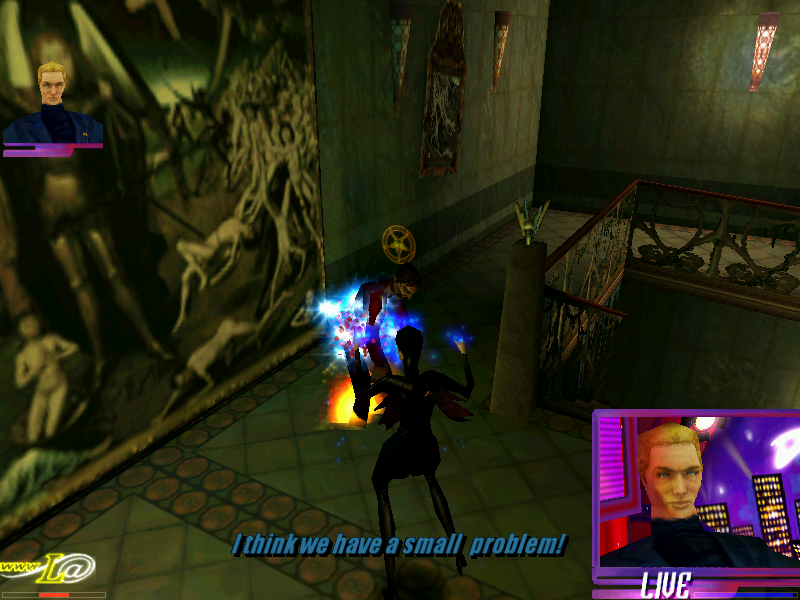 Who needs guns when Deva has demon powers?

Shadow Gate makes for an appropriately creepy horror setting, ornately furnished and cloaked in fog. The interiors are often too cramped to walk around or fight inside, but like other horror games at the time, it has an abundance of desk drawers, closets, and cabinets to root around in for items. Some of the demons haunting Shadow Gate have imaginatively bizarre designs, looking like human-shaped meat with extra limbs; the Night Howler looks like he got his wardrobe by graverobbing a 19th century British military band, which perfectly sits on the edge between dorky and appropriate for a demon to wear.

In a clever touch, a cameraman follows you around through the manor, reminding you that there’s an audience watching at home waiting to be entertained. He’s a real person who can get shot or dragged to hell just like you. You can switch over to his perspective, and even though that doesn’t help at all, the game loves an excuse to play around with multiple camera angles and give you a picture-in-picture view, like you’re a TV producer yourself. It’s enamored with the idea of being on live TV.

Step into Shadow Gate if you’re comfortable in tight spaces

But that also calls attention to the weird dissonance between the game The Devil Inside acts like and the game it actually is. For all the disco music, bright lights, multiple cameras, and supermodels back in the Los Angeles studio, The Devil Inside is a slog. Nothing about the game lives up to the tongue-in-cheek fun promised by the TV show; it’s a sluggish, inelegant shooter that’s more about endurance than thrills. You get stuck in tight hallways when the cameraman steps in the way, and the game bogs down the action with mountains of terrible, boring lore, making up racist mythology about Native American cannibals. Yet The Devil Inside wants to be more exciting than that, more like American Idol than Resident Evil.

So in the tradition of reality TV, the game manufactures drama instead. And like reality TV, its attempts to froth up excitement and controversy feel cheap. Traps will randomly set you on fire or summon demons out of thin air. The game has explosive detailed gore, and although it’s cool to blow a hole through a zombie’s chest (projectiles will pass through it!), the violence is usually dull, excessive for the sake of a reaction. The dismembered zombie grandmas with machine guns feel like a calculated attempt to be shocking. 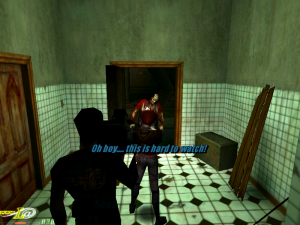 Surprisingly, for a game about an unscrupulous TV network making a crass spectacle out of extreme violence, it makes a point to target the critics – the loser intellectuals who would shut down the show. Half an hour into the game, the channel is hijacked by Angelina Axelrod, a privileged Vassar graduate who hosts a show on the Science Channel. You know she’s a serious journalist because she invokes “in the name of Woodward and Bernstein” like they’re occult gods, and she’s going to debunk this show once and for all. Our host Jack T. Ripper is a slimeball who cut his teeth on tabloid shows, but he’s supposed to be our slimeball. He rallies for the player by hurling sexist insults at Angelina like “harpy,” “crazy bitch,” or just cutting the subtext and sneering “woman.” Inevitably, she fails. Take that, “crazy bitch.”

It explains a lot about the game’s outlook that it makes the sleazy, manipulative Vince McMahon-style host – who in any similar story would get justly blown up at the end – into the good guy.

Eventually Dave rescues Angelina from the demons. She falls in love with him, and then there’s a leering scene of her caressing Deva’s body. It’s just empty titillation, pretending to be a parody. The Devil Inside doesn’t care about making fun of the hollow voyeurism of reality TV. The game actually loves it.

A note about compatibility

First, you need to replace the game’s executable file with a modified copy that ignores the CD check. I’ve uploaded a copy of the modified .exe here; thanks to whatever sketchy hacker figured this out 19 years ago. You’ll also need to copy the “Datas\Videos” directory from the CD into the “Datas” folder of the installed game (“Cryo Interactive\Devil Inside\Datas”).

For the final step, you have to run the game through DxWnd, a program that acts as a wrapper around DirectX-based Windows games for better compatibility. When you open DxWnd, drag Devil.exe into the blank window. The default settings will be fine, but you can also tweak options like running in fullscreen or windowed mode. Once you’re done setting it up, click OK, then right-click the icon and select Run.

If you want to go further, you can re-enable CD audio using DxWnd by turning on Expert Mode (Options menu). When you modify the DxWnd configuration for The Devil Inside, go to the Audio tab, click Help, and read more about Virtual CD Audio. Essentially, you rip the audio tracks from the game CD, then put them in a folder with the game files. The music noticeably improves the experience, so I’d recommend this step.

(The modified program does not include the official update patch, so you may experience some issues during the game. Thanks to Chris T for mentioning this in the comments.)