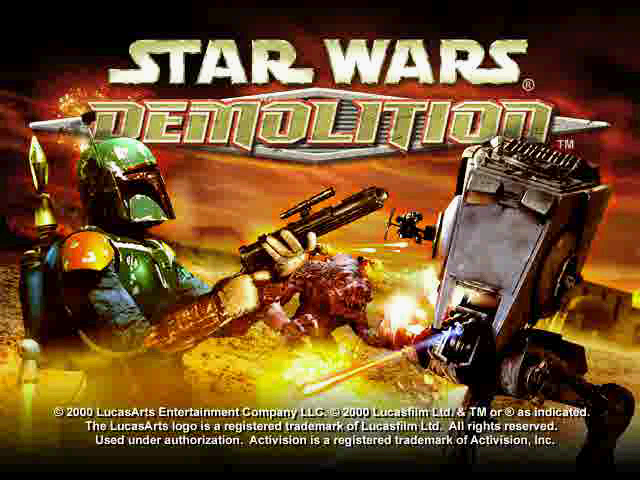 When The Phantom Menace came out in 1999, it was the first Star Wars movie in 16 years. The franchise had been through a dormant period, and in the years leading up with a real new Star Wars film on the horizon, Lucasfilm launched a bombardment of merchandise, tie-ins, and spinoffs to support the brand. There had always been Star Wars games, and now there would be many more, encompassing a broad assortment of formats and genres like a fighting game, several strategy games, a CD-ROM encyclopedia, and a whole bunch of software for children under the new Lucas Learning label. After The Phantom Menace, the engine kept roaring.

At the same time, multiplayer car combat games were having a brief heyday. While the peak lasted only a few years, titles like Activision’s Vigilante 8, halfway between driving and shooting, acted like a edgy, destructive companion to the era’s kart racing games. Inevitably, the aggressive blockbuster merchandise campaign laid its sights on the hot new violent game genre, and so became Star Wars: Demolition.

Cars shooting each other, as you could imagine, is not a practical fit for Star Wars. The game goes through contortions to justify its existence, and it tries very hard to assemble a serviceable roster of characters and explain why they’re fighting on Dagobah or the Death Star. It just isn’t organic. It was never going to be. The pretense does at least give Demolition an opportunity to play with some Star Wars-ier ideas.

By the game’s belabored explanation, Jabba the Hutt has brought together scoundrels from across the galaxy for an underground deathmatch tournament. The Star Wars universe doesn’t have many people known for their car-like vehicles, so Demolition tosses together whatever it can find. The game picks out minor characters or invents new ones like Quagga, the struggling Wookiee mechanic as an excuse to let you play as a landspeeder, a speeder bike, an Imperial walker, or a podracer, but the list gets shakier from there. Boba Fett shows up without a vehicle. Jabba’s pet rancor even joins the battle despite not being remotely in the same category as the other competitors. The game scrounges what it can, mixing and matching the prequel movies and the originals as needed, but it’s dire enough that one of the super-secret unlockable characters is Lando Calrissian’s weird silent assistant Lobot. Really, Lobot? 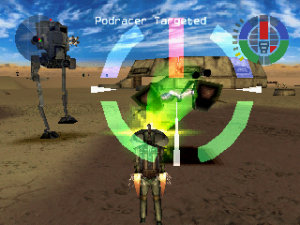 Demolition was developed by Luxoflux, the same studio behind the Vigilante 8 series, using the same engine. It has no qualms about being a licensed Star Wars version of those games. The things that the earlier games did well, like the targeting controls, still work here, and several elements like the radar in the upper-left corner of the screen are identical. Blowing up your friends in the multiplayer mode is still the main appeal rather than fighting the ropey computer opponents. Now this time, one of the stages has a Sarlacc pit. Thankfully, Demolition goes further than a reskin like a licensed Monopoly board, retooling parts of the game with a Star Wars bent.

Most of the tweaks are inspired by Star Wars‘s technology. You can charge up your weapons, and droids will climb into your vehicle to repair it or beef it up as a powerup. (Getting an R2 unit as a sidekick is pretty cute.) The adjustments slightly alter the speed and feel of the game. Unexpectedly, though, the biggest idea comes out of Demolition‘s flimsy storyline that I just made fun of. Jabba put together the deathmatches so he could take a cut of the gambling profits, and appropriately, betting and money have a role in the game.

In the one-on-one “high stakes mode,” the first player to reach 10,000 credits wins. You begin every match by wagering money; if you tend to lose, the payout will increase in the event of an upset. 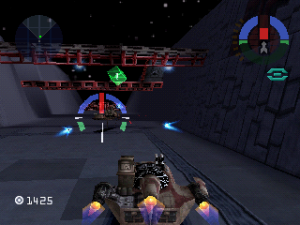 Jabba bought his contestants safe passage to the Death Star II. Sure, why not!

You can also earn additional prize money by pulling off special moves. Presumably, Jabba gives you a bonus for keeping the audience entertained. “Force Hit” combos, chained together from weaker attacks followed by a stronger one, don’t make a lot of sense, but they’re interesting to execute because they require you to shoot slowly and deliberately instead of going full-blast. (The game also awards credits for “Final Blow” attacks against damaged opponents, which aren’t nearly as exciting as they sound).

The bonus payments give Demolition matches a structure and a goal beyond simply winning, especially in multiplayer. Although credits are less significant in the tournament mode, where they only matter for unlocking new characters, they add a bit of role-playing. You get to be the seedy contestant, showboating to make extra money.

It’s interesting that Demolition visits, however superficially, the grimier, renegade side of Star Wars – with gambling and a cast of no-name criminals, where you’re encouraged to blow up the buildings in Mos Eisley – because it didn’t have to. Demolition was a franchise extension. The developers could’ve put Chewbacca and Darth Vader in cars with guns and called it a day. The game is already halfway there with its arbitrary vehicle list and a level set on the Death Star for no good reason, so why try to incorporate it into this dastardly setting?

As faint praise as this might be, LucasArts’s excuse for Demolition shows, at a high level, a certain care for even frivolous expansions of Star Wars like this. Maybe not in terms of a believable premise, but in the thematic possibilities of playing around in other corners of the galaxy.