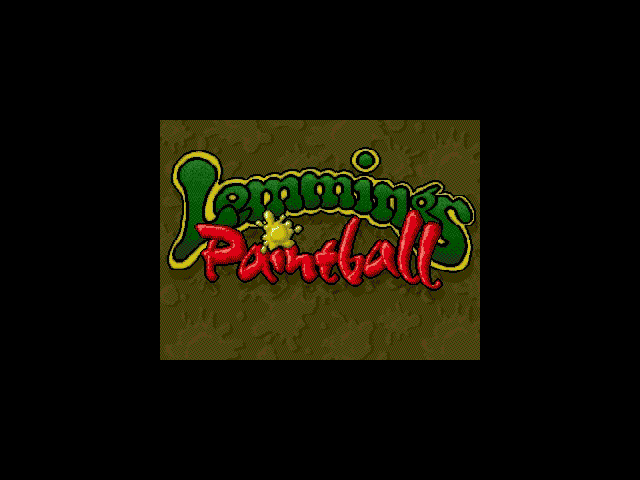 Despite a premise seemingly at odds with its property, Lemmings Paintball shares the series’s strategic charm. If you can overcome the initial shock of commanding Lemmings to shoot each other, you’ll find action inspired by the thoughtful franticness of their other games. The Lemmings keep their lovable herd mentality, even while armed to the teeth, but the iffy game mechanics draw too much negative attention to the thematic disconnect. These fellas are supposed to build bridges, literally and metaphorically! 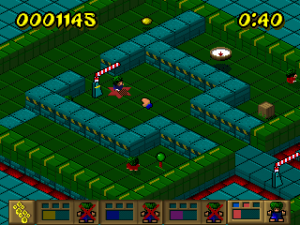 Levers and boxes separate you from the flag

In Lemmings Paintball, you command a troop of up to four Lemmings playing capture-the-flag. Your Lemmings must snatch all the opposing flags, splattering enemy Lemmings along the way. Light puzzles impede your raids, usually in the form of tricky level layouts, light platforming, or hidden keys. Each mission varies greatly in structure and difficulty: some are straight-on attacks against a Lemming army, while others emphasize puzzles and exploration. Most combine both elements, encouraging strategic use of all available (and unwounded) Lemmings.

This deviates significantly from the Lemmings formula, even beyond the gunfights. As mentioned, puzzles are still prominent; plenty of obstacles conjure the series’s cerebral playfulness, like its Slip N’ Slide-style transporters or rideable balloons. The direct similarities end there. In the most notable change, you control the Lemmings directly, commanding their point-to-point movements like units in a strategy game instead of their usual fatalist conga line. The gameplay barely resembles that of a Lemmings title because of this change. Lemmings games need a degree of uncontrollability and panic clouding the puzzles.

The combat sections provide that glimmer of chaos. Ferrying Lemmings across a moving platform is uncharacteristically simple when you can point them in the right direction, but if an enemy brigade spots them, all hell breaks lose. Gunfights last only a few seconds but disrupt the flow enough to keep you persistently on-guard, as you should with a group of Lemmings under your watch. With this addition, the series’s signature mother hen instincts kick in quickly. 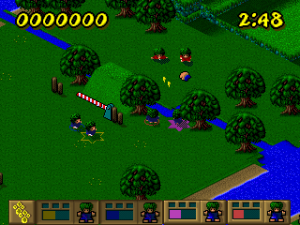 Don’t even try running from a firefight

These shootouts rebalance the pace at the expense of playability. When you control four Lemmings at once, combat is tough. Many other real-time strategy games recognize the difficulty of controlling multiple groups and offer some team management tools. Lemmings Paintball makes few such consolations. Be ready to switch between Lemmings at frenzied speed. Unlike in strategy games that automate the cat-and-mouse parts of combat, you’ll also have to aim and shoot manually. This is especially frustrating given the precision required and the long range at which fights usually unfold. Lemmings that aren’t actively firing or fleeing combat will surely die in a hail of paint. If you don’t have great reflexes or can’t swap Lemmings fast enough, the best strategy is often to fire wildly and blindly. But with a limited supply of paint, this usually isn’t an option.

Well-executed or otherwise, paintball seems like a major mismatch for Lemmings. To its credit, Lemmings Paintball is aware of this mashup’s weirdness: the game opens with a claymation video of a Lemming freaking out in the heat of a standoff because “Lemmings wouldn’t harm a fly…” Handwaving any inherent silliness allows the game freedom to bridge the tonal gap, and it does admirably adapt the series’s hallmarks where possible. The Lemmings still jump out of a trap door at the start of levels, and they still obliviously walk into giant fiery chasms unless you stop them.

The game clearly wants to tease fun out of the incongruity, but the awkward implementation stymies that. The strategic combat could work in theory – especially with its vital role in the game’s pacing – but here feels too desynchronized from the rest of the Lemmings-ness. Don’t blame the paintball crossover concept for that, as much as it acts as an obvious critical lightning rod for the game’s shortcomings. The commitment to the joke attests that the idea is not too far-flung from the Lemmings’ usual antics.

The fault lies with its execution. Take it as a lesson in strategy game design: if the game’s gonna be busy, give players the right tools to handle it.