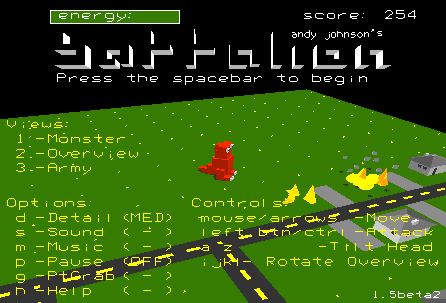 The poor citizens of this town are not ready for the destruction you’re about to unleash. You, the most adorable monster.

Andy Johnson, the creator of battalion, said he wanted to make a game that was like kids playing with toy monsters in a model city, “the kind of game that Calvin (from Calvin and Hobbes) would love to play.” In the spirit of Godzilla, or specifically Mechagodzilla, you are a giant monster, inflicting havoc on a random suburban town that’s woefully underprepared to deal with a 50-foot-tall killer robot. battalion is like a cutesy, tiny monster movie, fit into the constraints of a niche computer platform.

There are four monsters to choose from. There’s Googleon, the googly-eyed “idealistic young monster” who shoots lasers out of his eyes like an adorable red Godzilla, but you could also pick a creature like The Vapour, a sentient toxic cloud of gas. They all look pretty cute, even the cloud of gas. And they have the same awkward controls – moving and turning your monster by hovering the mouse cursor around the center of the screen, almost like a touchscreen joystick, while pressing other buttons to adjust the angle of the monster’s head. Why is it like this? 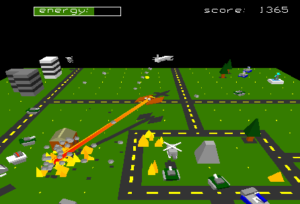 battalion was originally developed for the Silicon Graphics Indy, a low-end professional design workstation from the mid-90s that was better suited for architectural design software than playing 3D games. (It was created for IndiZone 3, a promotional contest run by Silicon Graphics. They wanted developers to make games that took advantage of their fanciest expensive hardware, but there was a category for their low-end computers too.) Although the game was ported to other platforms, it bears signs of the SGI Indy’s personality, not just the computer’s technical limitations but the design sensibility of a developer who was used working on that platform. The flat, boxy graphics are like the display on an early 3D CAD design program, like you would’ve used on an SGI workstation. The controls are a little bizarre, but they may not have been out-of-place for people used to working with specialized development software, who were the audience for this game when it was first made.

Johnson says battalion was also compatible with a CAVE, a virtual reality environment that projects 3D images onto walls in an enclosed space. They’re predominantly used for research and prototyping. battalion can feel like a game hatched in an R&D lab too. By playing battalion, you almost get a sense of who was using the SGI Indy, and perhaps why there weren’t more games for the platform.

You can adjust to the awkward controls, because you’re not playing as a creature known for gracefulness anyway. You’re a googly-eyed dinosaur stomping around town, crashing into buildings. You shoot lasers and smash things for about five minutes before the military musters enough force to take you down. I couldn’t accurately shoot down a helicopter, and that’s fine. My monster was going to die soon either way.

In those five minutes, I loved seeing what I could find in the suburbs. Based on the map included with the game, the town isn’t that large, but the cute stubbly monsters, the visual limitations, and the short playtime make it seem a whole lot bigger. The game can only render a few yards around you at a time, so every minor landmark like a tree or a fountain is a fun little discovery. On my third or fourth playthrough, I ran across a tiny fast food restaurant, complete with a tiny rotating sign on the roof.

Naturally, Googleon torched that restaurant with his eye lasers and blew it up into a billion pieces.

Staying true to his interests, Andy Johnson later got to flee from a giant monster in real life when he appeared as an extra in the 2000 Toho film Godzilla vs. Megaguirus.

Johnson is now a professor at the University of Illinois at Chicago. His personal page on the UIC website includes downloads for many different versions of battalion for old computer platforms, including the original version for the SGI Indy. Although it is no longer available, he also ported the game to iOS; with the control scheme, touchscreen phones seem like a natural fit for battalion.