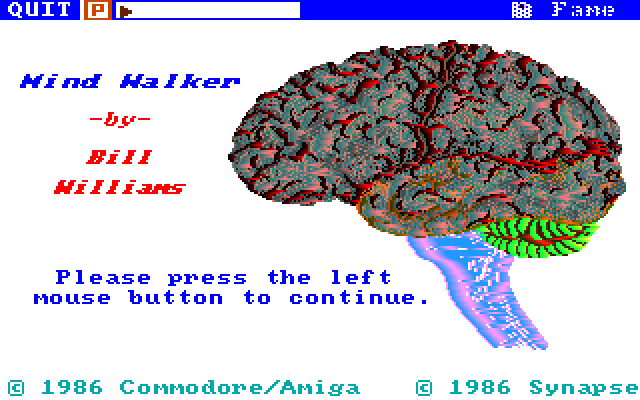 In Mind Walker, you go inside the human mind. The whole game is one big mishmash of symbolism about the subconscious, where a concept like “bad thoughts” will take on a physical form and attack you.

The game was designed by Bill Williams, who liked to create ambitious, complicated worlds that operate according to their own rules. Mind Walker is one of those ambitious worlds – the brain of a scientist, wracked by nihilism and paranoia. In a last-ditch attempt to save himself, the scientist enters his own psyche, trying to repair his sanity from the inside. While certainly interesting, the metaphor is so convoluted that the game loses track of it. 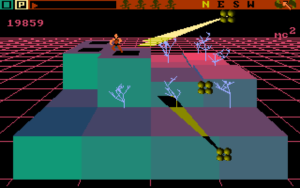 As you advance through Mind Walker, you move deeper into the scientist’s head. You start out in the Mind, a surreal grid world that looks like the abstract art on the cover of a 90s math textbook. Using a map as your guide, you must create a “Path of Coherent Thought” across the surface, which has been corrupted by negative thoughts. Completing a Path opens a passage into the Brain, represented as a maze of neurons holding the scientist’s last remaining Shards of Sanity. Finally, you descend into the Subconscious, where you assemble the Shards of Sanity like a jigsaw puzzle.

At first, Mind Walker moves at a cautious pace. Each time you collect more Shards of Sanity, the scientist recovers a bit, and the viruses and negative energies polluting his mind turn more aggressive. It gradually ramps up over the course of an hour, so quietly that you barely notice what’s happening until halfway in. By the time you have to complete the final Path of Coherent Thought, it becomes a race for survival as you outrun dozens of Bad Thoughts casting their Nihilism Beams at you. Mind Walker does a terrific job slowly raising the tension – speeding up the music along with the action – until it feels like the brain is having a panic attack. 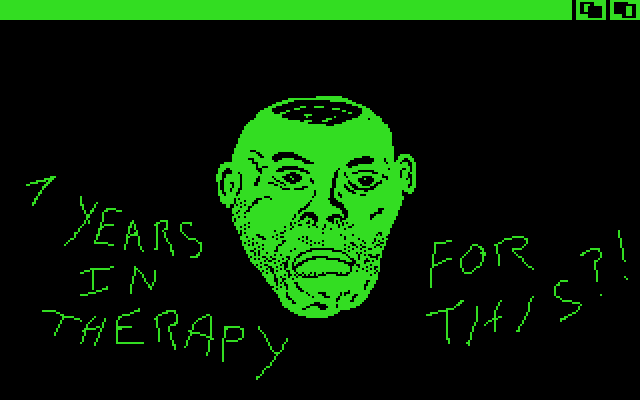 The scientist is not having a great time

Like other games by Bill Williams, Mind Walker is made up of discrete subgames. Each section of the brain plays totally differently and comes loaded with its own metaphors to explain what’s happening. But the symbolism here isn’t easy to grasp. It’s enough to have to wrap your head around this game that moves back and forth through the levels of the psyche, but then it stacks more metaphors on top of that, making it more confusing, not less. 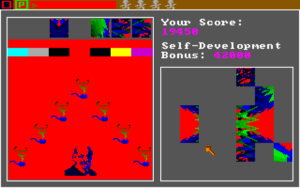 Until you’ve collected have enough pieces, the animated Subconscious puzzle is baffling. You’ll need a hint from Freud (on the left)

In the Mind level, the scientist’s ego has been split up into four archetypes that you can switch between, including a wizard, a nymph who can cross water, and a monkey-like creature who can climb on hanging platforms. To build a Path of Coherent Thought, you need to switch between all four characters. They’re meant to represent the different mental roles that the scientist takes on to navigate his thoughts. As unique as it is to run around inside a human brain as a monkey, it’s not intuitive to understand why.

Even more unintuitive is the Thought Reflector, the weapon you use to fight off viruses in the Brain. It’s like a curved mirror that reflects your “thoughts,” shown here as a dotted line that spins around randomly. It’s hard to control, much like real thoughts are. But what is the mirror supposed to mean? It’s one metaphor too many. It takes a simple, strong concept – an unpredictable weapon made out of your thoughts – and muddles it with another layer of meaning.

Building the game out of these confusing symbolic elements has the effect of making the human brain seem like a totally alien world. Williams did this as well in his game Knights of the Crystallion, which brought to life an ancient druidic culture with an entirely different value system from our own. But Mind Walker isn’t about a far-off fantasy world. It’s about the mind, something more familiar to us that we already have much less convoluted ways to talk about.

Maybe that’s the point, to make our own brains more confusing and mysterious, like a foreign planet we have to learn all over again and piece back together.