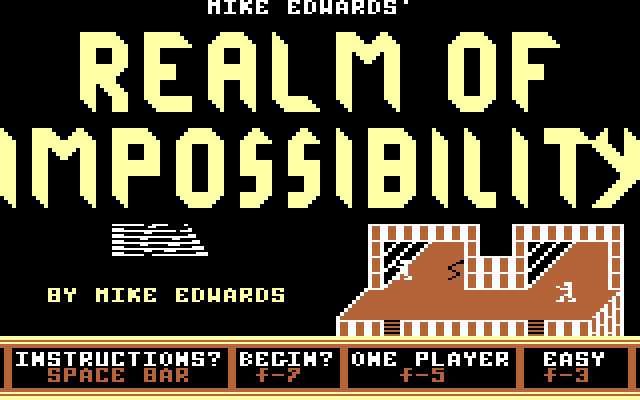 The most eye-catching part of Realm of Impossibility is the impossible architecture. Several stages in the game are designed liked optical illusions – the impossible fork and the impossible cube, among others. They’re disorienting and awesome and certainly the highlight, but they’re not the only place where the game plays around with weird architecture.

In this game, you have to infiltrate the dungeons of the cleric Wistrik the Evil to take back the crowns he’s stolen from the Middle Kingdom. Although that sounds like it would lend itself to a medieval fantasy adventure, the game looks more like a matte background painting of a distant scene from a 1970s genre movie. The camera is pulled far back at an angle, so the characters are engulfed by their surroundings. For a computer game from 1984, the stages have an incredible scale.

The dungeons have abstract, boxy designs with minimal details. (If you’ve seen the sterile cubic environments in the game Marble Madness, it looks similar to that, or like the retro-futuristic Assault arena from the game show American Gladiators.) Free from the thematic need to resemble an evil cleric’s dungeon, the stages explore bizarre layouts with complicated vertical movement and bridges, and, as mentioned, geometry that’s physically impossible. The game alternates these screens with wide-open areas, and the contrast between those two types of rooms helps emphasize the towering canvas that the game is working on. The drawback is that from a tiny, slanted perspective with a low resolution, moving through the tight layouts can be difficult. Your character often gets caught on the corners of the walls. The ladders used throughout the game seem to just be narrow vertical hallways that even the game admits are tricky to walk through; the in-game instructions suggest you should “wiggle” to enter them. 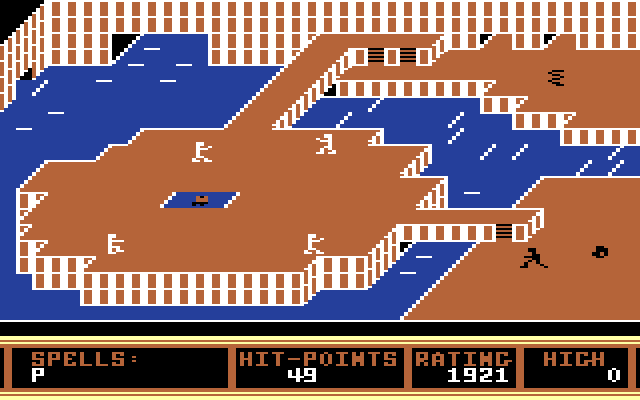 Plateaus are a common design element in Wistrik’s dungeons

Before it was picked up by Electronic Arts, Realm of Impossibility was originally released in 1983 under the name Zombies, and it’s clear why it had that title. There are enemies that chase you around the dungeons mindlessly, like zombies, and they also run distressingly fast. You can collect magical scrolls that will freeze or confuse the enemies, but because of how limited the control options are on a Commodore 64 joystick, you need to stand completely still to cast spells. With enemies relentlessly running towards you, that limits how useful magic is.

Instead, the best way to avoid monsters is to creatively use the dungeons’ strange layouts. You can leave “magic crosses” on the ground that ward off monsters, and they act like makeshift walls that can block off sections of the mazes. I loved walking into a room with half a dozen elevation levels and mentally mapping out how to barricade monsters and reach the exit. Pair that with the open areas, which are more like being thrown into a pen at the zoo and making a run for it.

Once you’ve reached the center of the dungeon and retrieved the crown (or the key), it doesn’t end there. You have to escape from the dungeon back the way you came. It puts one final twist on the level architecture that makes you look at it from another angle and map out a new path.

Realm of Impossibility can be tricky to play, owing to its odd scale and perspective running up against the constraints of old computer hardware. It remains interesting nearly 40 years later because of the dungeons, the impossible realms. They don’t even need optical illusions to seem impossible, just their abstract designs that make me question whether Wistrik the Evil should give up stealing crowns and start designing brutalist buildings instead.