Backpacker: The Lost Florence Gold Mine 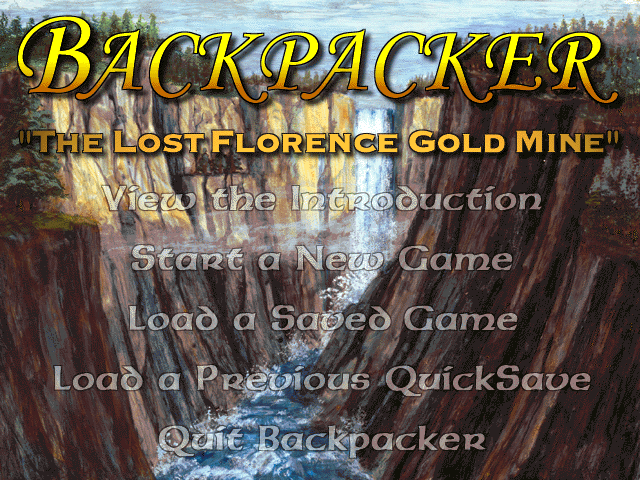 Early in Backpacker: The Lost Florence Gold Mine, our hero, the unfortunately named Chuck McBlade, stops at the Payette Inn for a meal. He doesn’t just buy lunch: he talks with the wait staff, reads the entire menu aloud, and grouses about the prices. Then, when his food arrives, we watch McBlade eat the whole thing. The scene moves mesmerizingly slowly, violating so many unspoken rules about too much detail in writing. The moment is jarring, not because it’s bad but because it runs against our expectations.

That leisurely, meandering pace distinguishes Backpacker. The game pays tribute to nature, hiking, and life outdoors, and its slowness feels like an exhale, a purposeful step back from problems to appreciate the world’s richness.

The game focuses on the legend of John Florence, a 19th century frontiersman who settled in Idaho. Florence supposedly discovered a gold mine somewhere in what is now Payette National Forest, but he died leaving behind only a journal with clues to its location. You play as the aforementioned McBlade, a square-jawed adventurer who, sixty years later, receives Florence’s journal in a mysterious package asking for help. McBlade arrives in Idaho to find the Payette Inn, cared for by Florence’s descendants, under pressure from the local owners who want to demolish the lodge to search for a missing page of the journal. McBlade strikes up a friendship with the Florences and decides to help them track down the gold and save the inn. 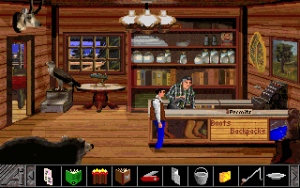 The rustic Payette Inn will make you love the outdoors

The story suggests a thriller – if not at the scale of National Treasure then at least with some intrigue and suspense. Loose talk early in the game inches in this direction by alluding to a murder plot by the innkeepers. Backpacker does eventually reach a climax as McBlade approaches the mine, but for the most part, the case’s implied immediacy is almost totally absent. Your goals at any point – usually meeting someone in the wilderness or finding supplies – have no particular hurry behind them, and all parties involved seem tired or resigned about the situation rather than on-edge.

Adventure games tend towards a slow pace as a consequence of their focus on puzzles and exploration, but Backpacker‘s drowsiness seems peculiar even for the genre. True to its name, you spend much of Backpacker hiking around Payette’s woods and mountains; large portions of these trips are devoted to long, quiet shots of lakes or frolicking wildlife. Many of your tasks there call for mundanities like identifying wild fruits or, when you’re in the lodge, washing the dishes. On several occasions, you need to talk with characters at length, and they’ll ramble on tangents about their childhood or stop to make a sandwich when they ostensibly have important information to share.

Backpacker‘s fondness for the scenic route comes off as transgressive at first (especially that sandwich scene). Why on earth would a game, or any media, waste this much time idling? As you move deeper into the game, though, you begin to appreciate to its chosen speed, as if moving from a big city into a rural area. Backpacker opts for a slower path where it can take a little longer. This is an eye-opening cultural difference from a game that celebrates outdoorsiness. 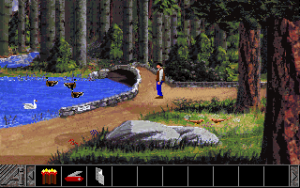 Pause for a while to appreciate the ducks. It’s gorgeous here!

Once you adjust to this, Backpacker really is lovely. The game depicts Payette, Idaho as such a beautiful, homey corner of the planet; the art of the town’s nature is breathtaking. The soundtrack usually consists of a quiet guitar or flute, reminding you that this is the right place to stop the clock for a bit. We could all benefit from that ethos once in a while. Go ahead, tell an overly long story or watch the birds. You can enjoy the little things more when there are no pressing concerns. Payette isn’t flashy or riveting, and it’s just fine that way.

The amateur acting actually enhances this laid-back attitude. Backpacker is the only game by first-time developers Animagination (explaining its atypical style), and most their voice cast either pulled double duty as animators or have never been credited with any subsequent game work. As a result, every character speaks in an unprofessional mumble. Their unpolished line-reading almost sounds improvised, emphasizing those townsfolk’s lack of pretension. The narrator especially fits the part; his baritone lies somewhere between Nick Offerman and Mythbusters‘s Jamie Hyneman, a pitch-perfect impassive masculinity that aligns with the game’s rugged themes.

The game does succumb to common pitfalls of adventure games. Puzzles often turn nonsensical or contrived, asking for difficult-to-see items or extreme leaps in logic. A particularly frustrating bit requires you to pan for gold at a specific point in the Payette River with no indication why that spot matters over others. Elsewhere, McBlade walks off narrow mountain paths too easily. The game also occasionally introduces reflex-based minigames that feel incongruous for both the genre and the slower setting, though at least in those cases, McBlade is usually playing darts, climbing a mountain, or doing something recreational in spirit with higher stakes. 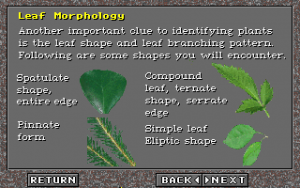 As a side effect, Backpacker teaches lots about flora and fauna

Narrative contrivances are troublesome on a different level: the mid-game introduction of Native American magic to speak to the dead trades in tired mysticism stereotypes and additionally makes little sense in an otherwise non-supernatural game, and the tacked-on romantic reward ending seems like a negative outgrowth of the game’s expectations for an outdoorsman’s masculinity.

In an easy-going game like Backpacker, many of these faults smooth out from how little weight the game places on any of them. Until the crooked innkeepers kidnap one of your allies, the exact events never matter. The obtuse and off-brand puzzles stifle the otherwise relaxed tone, but if you can accept those as filler or products of their time and consult a walkthrough to move things along, you can let the game wash past them and get back to the naturalism it does best. (The socially unconscious writing gets less courtesy though similarly can be hurried through with an eye-roll.)

Perhaps it speaks poorly of Backpacker that it plays best when its skims over itself. But those frustrating puzzles and clumsily handled plot developments are busy work in a game that, when given the luxury to stretch its legs outside the historical genre form, would prefer to go for a long walk. Backpacker dials down every hook you might expect from a mystery thriller, and its intentional non-urgency has an enjoyably disruptive effect on your own ideas about how a game should flow. If you choose to skip the extended lunch vignette, you would pass up the game’s most radical idea: sometimes it’s satisfying to slow down.