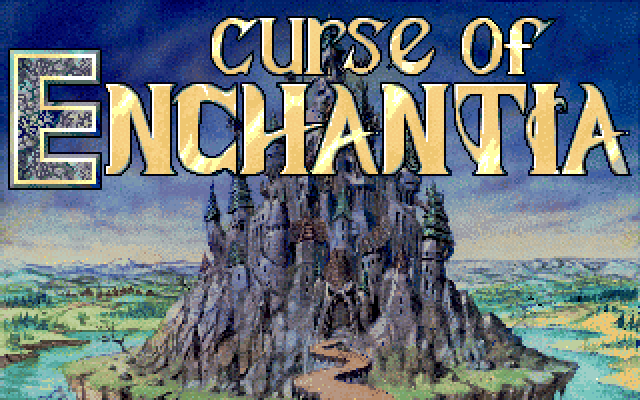 Dreams can be surreal, but the real fun lies in the twisted, fluid logic that guides them there. By the time you realize a dream has become totally alien from any real-life experience, you’ve already unblinkingly chased it down a path of nonsense actions. Maybe we buy into that subconscious malarkey because, silly as it is, it makes sense on some emotional level. Discount it rationally once you’ve woken up, sure, but we’ll believe anything in the moment that feels right.

That’s the appeal of Curse of Enchantia, a breathless fantasy that never really questions its heading. There’s no clear destination for much of the game, and rather than leave it rudderless, this frees Enchantia to build its own weird anti-story momentum. To its detriment, the game still clings to a traditional adventure game structure, but it uses those rigid mechanics for something far more slippery.

Curse of Enchantia reaches a narrative fugue state almost immediately by refusing to tell its story with words. Not much is implied through character actions or staging either: any explanation is just totally excised. The intro suggests that the protagonist, teenage baseball player Brad, has been magically kidnapped to the fantasy world of Enchantia by an evil queen, but her goals and your quest are never discussed. Effectively, you play as a boy who turns up in a castle dungeon and takes any option available to him. 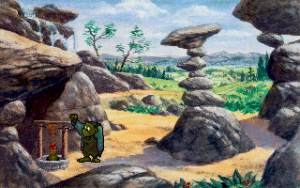 What follows is a stream-of-consciousness journey in whatever direction presents itself. After escaping from prison, Brad is chased down a hallway by a bipedal fish guard; he falls off a cliff into the ocean, where he uses a glass bowl for a scuba helmet and has to ride a turtle to cross a pit of electric eels.

A beat-for-beat explanation of Curse of Enchantia really does sound like a hurried account of a half-remembered dream. A narrative outline would resemble a round of exquisite corpse, with ideas flowing with barely coherent progression and no consideration for a broader story, and the game relishes that. By the time you meet a giant, mountain-dwelling bird who turns you into a frog, the game has established such a consistent rhythm of barreling forward through increasingly hallucinatory events that it can get away with effectively whatever it wants. You can feel the designers’ sense of total liberation. Brad at one point has to record music played by a band of slugs next to a volcano, and like in the best bottomless dreams, it doesn’t seem out of context with anything in immediate memory.

The near-total lack of language deepens the strangeness at hand. Any script might use a giant abandoned pyramid of cars as an opportunity for a throwaway joke about the odd scenery, but this game doesn’t have that luxury. The car pyramid has to sit there, totally creepy and undefused, and it contributes a lingering sense that something is a shade irregular.

You navigate this uneasy dreamworld, though, with standard adventure game mechanics, and they don’t fit the meandering route the game takes. Every player action has to filter through one of a dozen verbs, rendered here with confusing symbols (“push/pull” and “give” are too similar, and what do the interlocking Lego pieces mean?). With so many items, options, and locations available at any moment, it’s unclear what specific action the game wants from you even when the crux of the solution is obvious. 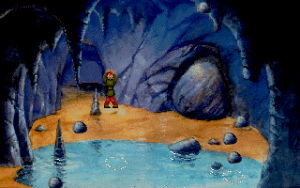 Endless tunnels, cave-ins, and hidden switches – like a nightmare

Consider a scene where Brad has to pull a giant bathtub plug out of the ocean floor (classic dream logic silliness). You clearly need to pry it out with a crowbar, but Curse of Enchantia wants you to “insert” the crowbar as a keycard – a separate action from “unlocking” it as a key. The game’s cascading weirdness hangs up while you sort this out, and simpler interactions would have resolved those speedbumps. (This is especially evident during the more obtuse, frustrating puzzles, like fashioning a mask out of mud.) On the other hand, the big palette opens your mind for what sort of activities might await: you should never need use the “eat” command on a magnet, but given the circumstances, it’s not out of the question.

That curiosity about where Curse of Enchantia could possibly lead next is the game’s greatest thrill. Every scene comes with incident – a room to escape or a vampire to outrun – that contributes to the feeling of an endless bad dream. Sometimes that turns towards a nightmare-like tedium, most notably in a long sequence where you have to gather rocks. The joy lies in the twisted path the game convinces you is totally normal. You trust the individual choices it makes, and by the time they’ve cumulatively reached a point of almost unidentifiable weirdness, you bear part of the blame for accepting all the little compromises to reality along the way.

But mind the unsteady descent. The game aggravatingly has to work within genre norms that encourage confusing and overly complicated puzzles, made worse by the game’s non-verbal tendencies. When Curse of Enchantia escapes that and pours its energy into the strangeness of the situation, it gets why you’d want to follow a dream that spiraled far beyond its starting point.