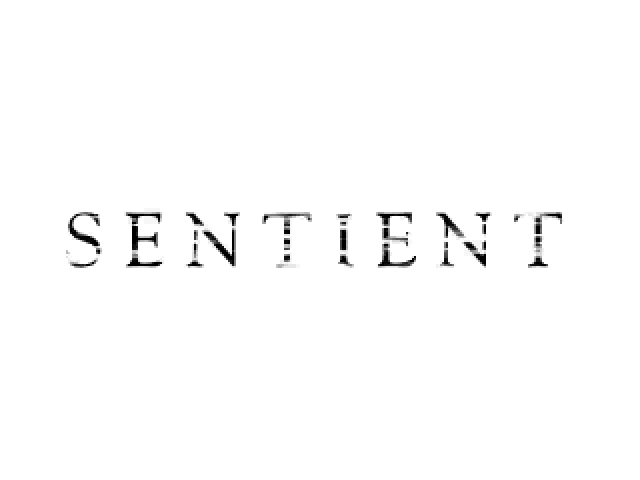 When a solar flare hits the space station ICARUS, the entire place shakes. Your screen rattles back and forth. Alarms go off. Over the loudspeakers, a voice dispatches orders for the medical team. This disturbance repeats periodically in the background as the station careens closer to destruction. The crashing noises are a constant reminder: this disaster will continue to unfurl, no matter what else is going on.

Something is always happening in Sentient. The ICARUS has a full crew running around doing their jobs, and as part of your mission to save the space station, you can go anywhere in the facility and talk to any character about basically anything. It’s dizzying, and it can be hard to understand what you’re supposed to do with that radical freedom. 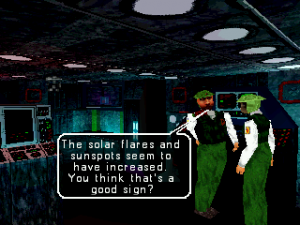 The ICARUS crew chatting about the situation. No, more solar flares is not a good sign

As you might expect, the ICARUS is an ominous name for a space outpost in close orbit around a distant star. The station has started drifting into the sun, and the damaging solar flares have afflicted the crew with radiation sickness. Unusual events have put everyone further on edge, like mysterious transmissions coming into the station and a visit by a senator kept under tight secrecy. By the time you show up as their new medical officer, the situation has already turned into a crisis. The ICARUS barely has the wherewithal to respond to any of this; internecine squabbling and distrust between the station’s researchers, engineers, and scientists seem to long predate your arrival.

Amid the panic, the crew assigns you to help investigate what’s happening to the station. For your first task, the medical team asks you to coordinate the staff’s research into the solar flares that have rocked the station, the impact of their radiation, and what might be responsible for the station’s descent.

The investigation is an open-ended assignment. Sentient lets you roam around the entire space station, and you have a seemingly vast range of possibilities for where to go, who to interact with, and what to look into. Every computer terminal, every storage closet, and every security guard seem like they could hold a clue. 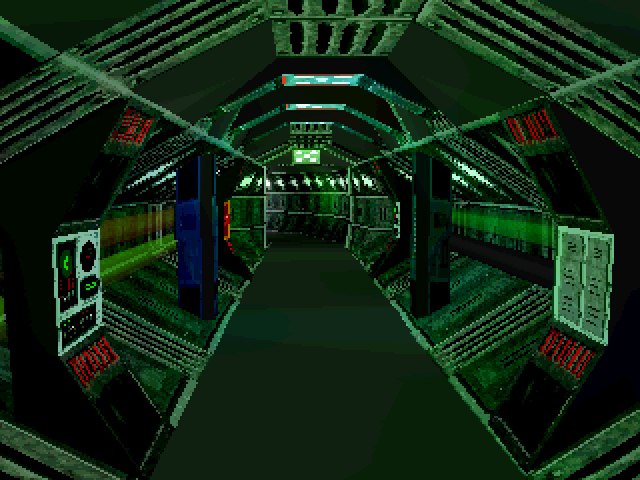 The long, twisty hallways are color-coded to indicate what wing you’re in. Green is for the Geodome

The ICARUS is a cramped, circuitous environment. The narrow, nested ring-shaped hallways have their own numbering system, painted on the walls at the intersections. Even if you figure out the layout, it’s challenging to find a particular room – and especially a particular person. After all, this is a congested space station in crisis mode. Though as interesting as exploring that space can be, too much time is spent wandering the halls in disorientation, hunting down a object or a person who’s moving from room to room.

(The game really likes lonely, disoriented wandering for some reason. It opens with two back-to-back dream sequences in a randomized maze that takes several minutes to walk through, and it wrecks the game’s momentum. It’s bad enough that I abandoned Sentient at least half a dozen times before finally playing it.)

The hallways of the ICARUS feel alive, as if they’ll still be active when you leave. Workers make idle chatter as they pass by. If two major characters cross paths, they’ll have a tense exchange, foregrounding the dysfunction among the crew. You can ask a crew member for directions or to escort you to a specific person; in a brilliant touch, sometimes they won’t know where somebody is and will lead you to the wrong place. It surprised the hell out of me, and it surprises them too, which is a tremendous way to humanize these nondescript characters. Your job depends on fallible people!

It’s like finding your way around someone else’s workplace – unfamiliar halls with their own social dynamics. 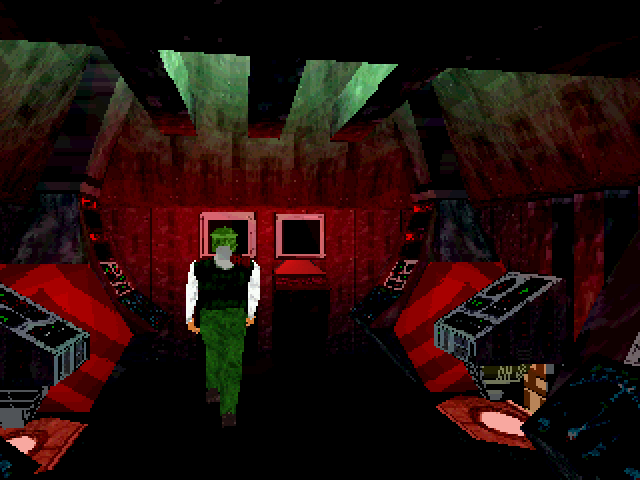 Machine rooms like this may never need to be used, but you can always make a detour

Talking with those fallible crew members is the key to your investigation. Everyone onboard knows something different about the activities on the ICARUS, and you have to do some detective work to connect it all together. To this end, the centerpiece of Sentient is a dialogue system, where you can string together sentences from the information you know.

Speaking to another character opens up a sprawling dialogue menu. You can ask them about the state of anyone or anything on the station (“What… is the status of… Room from list… Propulsion… Telemetry Control Room?”). You can ask them about themselves and how they feel about someone else. You can offer them inventory items they might need, like a first aid kit, or you can make statements about yourself, the station, or information you’ve learned. You could tell them that the engineering washroom is locked, even if it’s not. Or how do they react to hearing about the secret plan to lower the station’s orbit? Depending on the crew member’s personality, you may be able to order them to lead you somewhere, give you an item, or fix a broken piece of equipment. Every object, person, room, and plot-relevant piece of information you’ve encountered – and some you haven’t – are up for discussion. 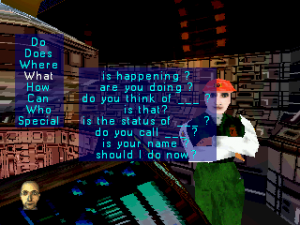 One layer of the absurdly meticulous question menu

There’s even an option to explain your character’s backstory to other people (they feign interest and try to change the topic with small talk). And although it doesn’t seem to affect the dialogue much, you can alter the tone of the conversation by changing your facial expression on a five-point scale from smiling to frowning.

This is an overwhelming and gratuitous system. There are dozens upon dozens of possible dialogue topics, many redundant, and most of them are totally unnecessary in any context. At crucial moments, like confronting Dr. Holman Azirra about a report he tried to bury, you only have about three things to say, yet the game presents you with the entire range of subjects you could ever discuss with anyone. It can be difficult to determine which of them actually matter. The game gives you the impression of expansive options and some notion of realistic conversations, but most of it seems to be there for show.

It reminded me of the 2002 Xbox game Steel Battalion, where you pilot a huge military robot. Steel Battalion came with a gigantic custom controller with around 40 buttons and switches; it looks extremely cool as well as unbelievably cumbersome, and many of the buttons are used exclusively for a single extravagant sequence at the start of each level. Sentient is like Steel Battalion for words.

Contrast that with the simplified conversation systems in more recent games. In the secret agent game Alpha Protocol, you choose an attitude for your responses – professional, suave, or aggressive – rather than individual lines of dialogue. Though they’re imperfect, these sorts of systems convey the spirit of the dialogue choices, boiling them down to their emotional charge and intent. Sentient, by comparison, is excruciatingly literal. Talking to a scientist about the impending doom of the ICARUS feels as uneventful as telling them about the engineering washroom. It’s an amazing experiment, and giving you such granular, specific control of words can strip them of their emotional and dramatic context. 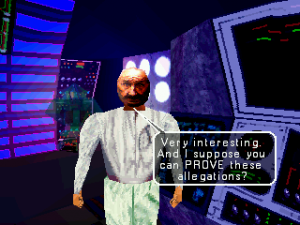 The dialogue is just functional. You have to figure out exactly what to say at the right times. It isn’t enough to locate the security officer who says something has gone awry in the Tree Growth Room; you also have to ask her the right questions (from the humongous list) so she tells you the name of the gardener who can help.

Sentient requires your active participation in specific events. If you meander too much, the game will move ahead without you. If you take too long gathering medical reports for chief medical officer Dania Luvey, she’ll tell you that your help is no longer needed. If you don’t touch base with chief engineer Mason Garrliac, he’ll leave his quarters, track you down, and accost you about the documents he needs. If you miss information or aren’t sure how to proceed, the game leaves you adrift. You have to catch up, if possible, by asking random crew members for gossip or advice. I needed to follow a walkthrough to fill in the gaps in my information.

Sentient expects you to keep pace with the story, hit your marks in time, and say your lines, like an actor in a play. That’s an awkward fit for a game that otherwise likes wandering, a game where you can walk into a random research lab and get yelled at by a scientist, then ask them what they think of their co-workers. There’s tension between how seemingly wide open Sentient is and how it means for you to take a narrower path.

There’s another way to look at it: the ICARUS is always happening, with or without you. The crew will keep working and talking to each other; the radiation sickness will spread; and the station will slowly fall into the sun. You work in a cramped, crowded, and chaotic environment. Sentient gives you great leeway to roam around this place, but you still have to keep up.

That means hurrying around a huge space station filled with maintenance rooms and computers you’ll never interact with. It means letting you say almost any conceivable sentence at any time, even when it’s irrelevant. It means characters who get impatient when you’re distracted. The game fills in an open, active world around you without paying much attention to it.