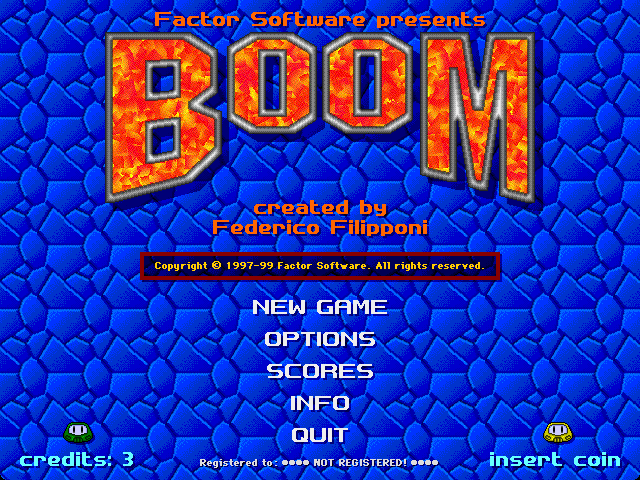 What do you get when you combine Bomberman and Doom? Chances are, it looks like Boom, a game that certainly does not infringe on intellectual property.

This was a shareware game that was sold for $15, not a free fangame. And despite whatever risk it opened up for the developer Factor Software, Boom doesn’t shy away from the fact that it’s basically Bomberman with Doom characters. It even calls the games out by name. You play as a space marine in a green suit of armor who fights aliens – not demons – that look like human soldiers. One of the enemies named Thick Lizzy is almost identical to the fireball-throwing imps from Doom, except that it’s named Thick Lizzy. Technically speaking, these weren’t actually characters from Doom, which must have given the developers just enough of a cover to call it a parody if they needed to. The likelihood is that since the game was for the Macintosh and it was distributed through shareware CDs and the late-90s internet, nobody’s lawyers knew or cared about Boom, and under the cover of obscurity, Factor Software got to see what it would be like to map one franchise over the other.

Besides a few Doom-like characters, Boom also imports the faster-paced action from Doom into the template of Bomberman, where you clear through a maze of blocks and monsters by setting off bombs. Typically in Bomberman, your character dies in one hit, but in Boom, they’re more durable. The enemies will hunt you down by shooting or charging at you instead of wandering aimlessly through the stage. You can’t trap them with bombs like you can in Bomberman, either, because they’ll walk right through them. It encourages you to act more aggressively. There’s less risk of dying, so you can cause more damage by running into the fray. 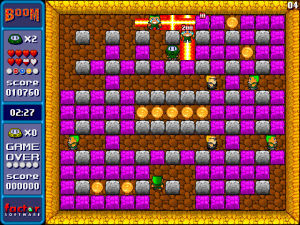 Knee-deep in the cute

Not everything is directly inspired by Doom. Across eight worlds, the game gradually introduces new themes, monsters, and boss creatures, many of them original, like the multi-colored alien dog known only as The Thing. The differences between Boom and Bomberman are actually fairly minor, but they seem to follow out of the game’s more combative pacing. The level designs use unusual geometry to funnel you into the action and get you closer to gun-wielding aliens. You can’t play Boom as defensively or cautiously.

The biggest surprise is that Boom is confident enough in itself to be its own thing. It has a high level of polish and panache, and that carries it beyond the novelty value of being a mash-up fangame. Each world runs about three or four levels too long, and they sag halfway through when the variety in the action in that particular set of stages flattens out. Once the game runs out of the steam, the cutesy-creepy character designs and the bubbly sound effects still play well outside the initial context of being a Doom parody, perhaps even better. Although there’s no denying who Thick Lizzy is supposed to be, he has enough charm to hold up on his own. (Backed by thumping electronic rock music, which seems to have been unusually common in Macintosh games.)

It’s interesting how the qualities of Doom subtly change the pace of a game like Bomberman. It’s an unexpected surprise that a game that openly rips off two other game franchises would stand this well by itself.