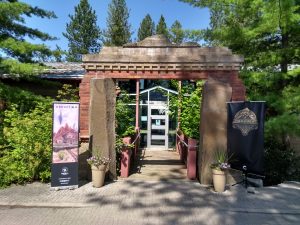 When we visited Cyan Worlds, we were given an important instruction: the south building is off-limits.

The success of the groundbreaking 1993 CD-ROM game Myst gave Cyan Worlds enough money to build their own headquarters in Mead, WA, and over the decades, it has become a physical embodiment of their triumphs and setbacks. During the development of Uru, an ambitious online adventure game set in the world of Myst, Cyan constructed a second building on the south end of their campus to handle the company’s expected growth. When Uru was canceled by their publisher Ubisoft, Cyan was hurt. They were forced to significantly shrink the company, leaving the second building vacant. It is now leased to the Grace Christian Fellowship church of Spokane. Myst fans are not welcome.

Cyan’s beautiful, scenic headquarters has become as much an integral part of the company’s history as their games. The halls of Cyan are decorated with pieces of the legacy that follows them – a cabinet full of awards from now-defunct publications like MacUser; towering display cases holding the costumes and props they used in the live-action production of Myst and Riven; and a plaque given to them by fans, sweetly commemorating the announcement of the relaunch of Uru in 2006, less than two years before the game was canceled again by their new publisher GameTap. It can’t help but feel weighed by the past, the emptier rooms alluding to the bigger, revolutionary company with a burgeoning future that they once were.

Yet because of this building, they have persisted. In a tour of Cyan headquarters with PC World, Cyan co-founder Rand Miller said that owning their own property kept them in business. “I don’t know if we’d be alive if Myst hadn’t built this house,” he said. “Not paying rent… having it paid for and having a space to work, it means your expenses are so much lower.” With their own property, they could afford to take on quality assurance contract work in order to keep the lights on. They’ve been able to lease parts of the building to other local businesses (or that church). They rent out the grounds for events, for which they even built a stage next door, nestled in a picturesque alcove of conifer trees that could have come out of Channelwood. It’s weird to think of Cyan, a company so vital to the development of multimedia and exploratory games, as essentially being a landlord now, but those boring, practical business decisions are why they’re still making games while other studios from their time have closed. 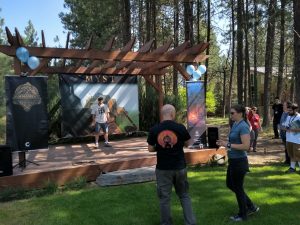 The event stage at Cyan Worlds, complete with cyan balloons!

So when we visited Cyan Worlds for a picnic as part of the Mysterium, the annual Myst fan convention, it felt like a homecoming, both for us and for the company. The stage that they usually rent out for weddings was adorned with an oversized Myst backdrop, flanked by banners for their newest projects Obduction and Firmament. Rand Miller took the stage in a Hawaiian shirt and Birkenstocks, joking around with a crowd of 250 people about the weird way he likes to eat watermelon. (He cuts a whole circular slice and eats it with a knife and fork. Really!) The empty room in Cyan’s basement with a planetarium dome on the ceiling was packed with fans eating hot dogs and playing virtual reality demos of their new game. Over in the staff kitchen, I chatted with Myst art director Chuck Carter, and he happily confessed that the Selenitic Age train puzzle from Myst was inspired by the Mars tunnel sequence from The Journeyman Project. (“We were all copying each other,” he said with a smile.) For a wonderful afternoon, it was like Uru was never canceled.

It was a reminder of how deeply human games are. Cyan is more than a building full of props. (And hundreds of unsold copies of The Manhole: CD-ROM Masterpiece Edition, which they significantly overproduced. Anyone got a copy who asked.) Their building is at the center of the long story of Cyan Worlds, but that story comes from the shared history of everyone in attendance. It’s the story of the long-time employees who leave and come back as Cyan’s budget allows. It’s the overwhelming display of affection for Richard A. Watson, better known as RAWA, the long-time lore master for the Myst series, who was recently diagnosed with brain cancer and took the stage to resounding applause. It’s the fan who, for reasons related to the history of Cyan and the Myst community, translated a Red Robin menu into the fictional D’ni language.

A building is just a building, no matter how important it is. What makes it more than a home for old memories are the people who bring this place to life, who make those memories count. And they’re still here, working on new worlds in the same headquarters where Uru was created and ended several times. They’re deeply in touch with their history, building on their past for their future.

One Cyan employee – I forget who, maybe Ryan Miller – mentioned a meeting at Cyan in 2003 when they realized Uru wasn’t going to pan out. It sounds like it was a bleak moment for the company when they knew their future was called off, sending them on the path to eventually lease their headquarters out to a local church. It reminded me of a story that historian Laine Nooney tells about Sierra On-Line, the Met Cinema layoffs of 1993, when the company was gathered at a theater in Oakhurst, CA and a significant portion of their employees were fired on the spot. These are very different situations of different magnitudes, but it’s incredible that through everything, Cyan is thriving today. They’ve taken ownership for the benefits and baggage of their space; they’ve not only accepted but embraced their tumultuous history. The campus is a symbol of their resilience.

(I had a terrific time at Mysterium 2019! It was lots of fun making and catching up with friends who love this mysterious game series. The whole event felt like a big group hug. It was also personally interesting to reflect on how my relationship with games has gradually shifted from being a fan to being a researcher. From either perspective, it was exciting hear Cyan developers, like Riven sound designer and future Halo composer Marty O’Donnell, reminisce about how playing early multimedia CD-ROM games such as Spaceship Warlock and Hell Cab shaped their interest in games.)