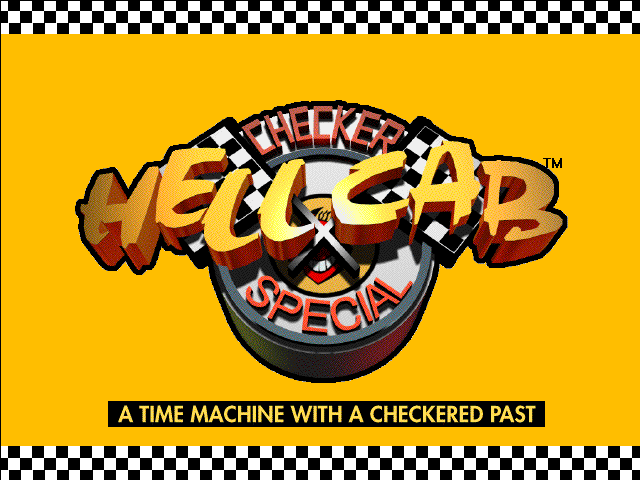 Hell Cab isn’t short; it’s brief. The infernal Hell Cab whips through a Roman coliseum, the trenches of World War I, and a prehistoric jungle in only a few minutes before returning you to the present day. You’ll probably spend most of the game’s running time checking out the Empire State Building before the world’s worst cab ride begins.

The tone-setting and breakneck linearity of Hell Cab share less with the adventure genre than with a high-end theme park ride. As with many early multimedia CD-ROM titles, Hell Cab is above all else a spectacle, an outlandish idea staged as loudly as possible. It also demonstrates what a roller coaster of a game loses when it reaches a little too far. 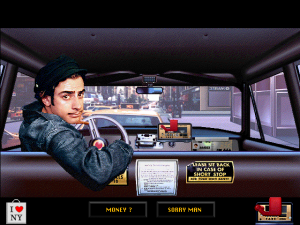 Raul Delgado seems easygoing, but he’s in this for your soul

Hell Cab leans hard into the total absurdity of this premise. The game drips with nose-thumbing sarcasm – not always directly with humor, like the ironic Muzak music playing under your trips to Hell, but through its ragged pop-art aesthetic that incorporates real photos and brand names with exaggerated computer graphics. It’s subversiveness without a compass, funny when you can piss off authority (“Are you a clown?” “Yes.”) and off-putting when it briefly churns out a homophobic punchline. (An Easter egg ranking celebrities and fictional characters by their morality puts Howard Stern near the top, if that indicates the game’s influences.) Thankfully, cheeky usually wins over creepy, and that smirking roughness suits a game seeing what its format can get away with.

Like any big ride, it starts with a queue to whet your appetite – a leisurely swing by the Empire State Building. This first leg of the journey, branded “tourist mode” in-game, may just be an excuse to play around with the potential of CD-ROM adventure games to build settings. Hell Cab‘s Empire State Building probably takes liberties with the real thing, but it wants to be an authentic location. You can read commemorative plaques on the walls, use the ATM, or check out the roof observation deck. And of course, Hell is tucked into the basement. 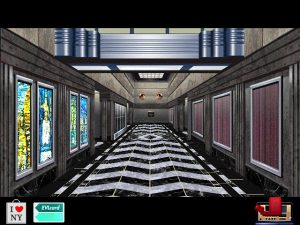 Though none of this is necessary, the game clearly relishes what its technology allows. Why else would you be able to watch short animated films and ads for Wired magazine in the lobby? This might speak to what appealed to creator and comic artist Pepe Moreno about making a game in the first place.

The main attraction starts whenever you’re ready. You don’t have enough cash to pay Raul, so he offers you a contract to work it out. You’re basically selling your soul, agreeing to ride with the Hell Cab through history, and putting your life in grave danger. If you die three times, you’re off to Hell forever.

Each of the Hell Cab’s trips lasts about five minutes at a normal speed. On your visit to Rome, you meet Nero, get thrown in prison, meet Roman slaves, get drafted into a gladiatorial game, and leave. Tearing through a historical setting so quickly implies drive-by tourism like the Empire State Building visit, which Hell Cab enjoys and executes well. Instead, the game adds a few too many other elements in that short window, weakening every part.

You have a health gauge, the Soul-O-Meter, that drains when you make immoral or scandalous choices (adultery, murder, “peddl[ing] drugs to pre-schoolers,” and so on) and heals when you help others. Bankrupt your soul, and you’re immediately whisked to the netherworld. This mechanic makes a ton of thematic sense in a game about Hell; Hell Cab goes all in by placing the Soul-O-Meter front-and-center in its instructions and interface. Despite the preoccupation, the game doesn’t really have many moral decisions beyond a few optional side interactions. It’s a huge waste of attention. The eternal judgment angle has loads of potential, especially with the game’s wry attitude, but it has to fight for space in such a briskly paced game. 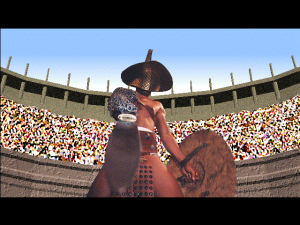 Once again on the wrong end of a gladiator’s sword

The game also has to make room for its disastrous action sequences. A gladiator fight, a deadly obstacle course, and a turret shoot-em-up sound like reasonable additions to a game, maybe even expected and necessary for a game set in dangerous times in history. But a game made with Macromedia Director in 1993 cannot handle action. The turret sequence, with soldiers flickering on the horizon, is particularly inscrutable and unresponsive. As in the fistfights in Spaceship Warlock, your best bet is to click as fast as possible anywhere on the screen and hope for good luck.

Because of these segments, I couldn’t complete Hell Cab, short as it is. During the World War I trench sequence, soldiers will randomly appear and shoot you; on a computer fast enough to play the rest of the game, you can’t react to those soldiers quickly enough.

Many older games have technical issues, especially early multimedia titles. I try to be mindful of that kind of context and to consider how a game might have played under ideal circumstances. That said, Hell Cab is nearly impossible. I had to watch a playthrough video on YouTube to fill in the last 15 to 20 minutes. Tellingly, the player in that video never came under fire. 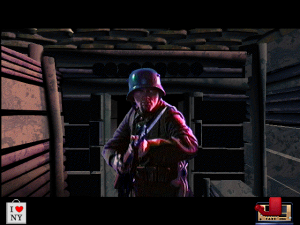 Can you get more than two steps through the trenches?

Your visit to the Jurassic era acts like a counterpoint to these problems. There are no fights or pretense of moral choices, just a path to walk down and dinosaurs to look at. In that admittedly sparser frame, Hell Cab exercises its character a little more freely. The Rome segment is bolder, but it feels rushed, crammed with extraneous gameplay ideas, and barely put together.

At the time of Hell Cab‘s release, the technology behind multimedia-heavy adventure games was still imperfect. And the genre was still finding its strengths. Such games often excelled as splashy interactive ways to create new places. Hell Cab has fun with those capabilities – come on, you get to hustle through dinosaur times! – but it wants something more ambitious and faces creative and technical consequences for stretching too far. The game’s performance varies wildly, and with so much energy spent on mechanics that go nowhere or break, the historical periods don’t get enough love or personality to leave as strong an impression as they should.

The game isn’t quite the roiling, hellacious road trip shown on the splash screen. It asks too much out of a leanly game structure that thrives on less.

UPDATE: This article is based on the Windows version of Hell Cab. The Macintosh version has considerably fewer technical issues (the platform was generally friendlier for early high-color multimedia). However, the criticisms of the action sequences stand. Those scenes still play poorly and require outrageous reaction times.

Raul Delgado is played by Vincent Louis Carrella, director of the disgusting 1996 cockroach adventure game Bad Mojo. He is now a novelist and photographer.

Hell Cab wasn’t the first in its class, and the game pays tribute to what came before: the moral ranking Easter egg gives high placement to Presto Studios, Pop Rocket, and Drew Pictures, all companies involved in some of the first CD-ROM adventure games.