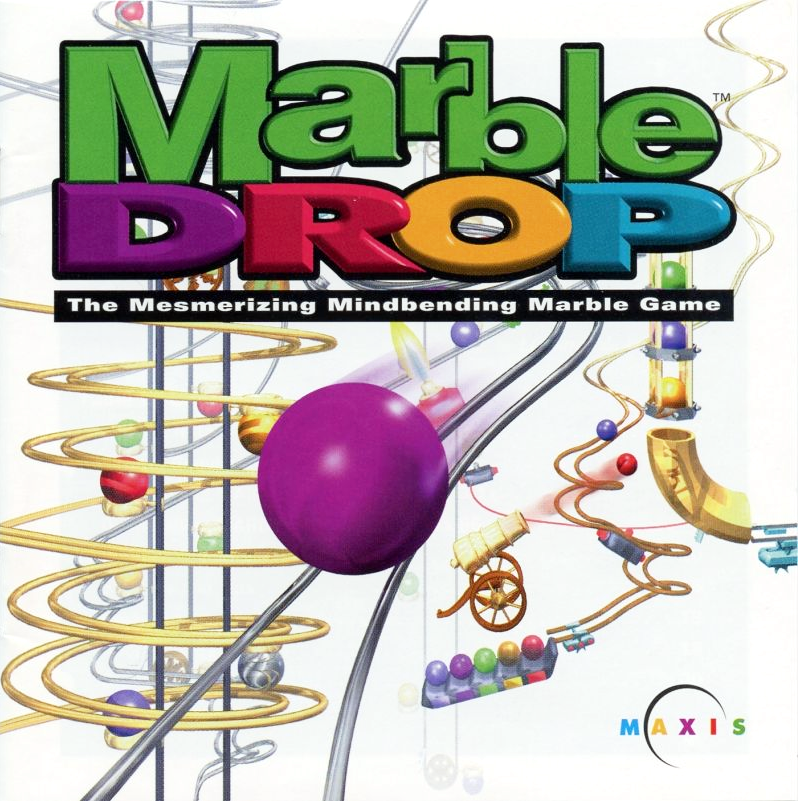 When I read picture books as a kid, my favorite part was following the illustrations. If there was a cross-section drawing of a house, I would trace my finger up the staircases and through the doorways. That’s probably why I loved illustrated mazes, or the busy scenery in hidden object books, or puzzle books where you had to untangle a bunch of strings, because it’s fun to follow a winding path and see where it goes.

Marble Drop taps into that same sort of fun. It gets you to follow the path that a bunch of marbles are about to take through a complicated maze of gizmos. You don’t even have to finish solving it correctly to enjoy it!

Marble Drop is one of only a handful of titles developed by the game company Maxis that’s unrelated to their Sim series. In fact, it was created by another division, Maxis South, credited in this game as Maxis Austin. Originally, they were known as Cinematronics, and Maxis bought them in 1996 for $2.3 million as part of an ill-fated plan to expand the company into general entertainment titles after they went public on the stock market.1

Cinematronics is certainly best known for 3D Pinball: Space Cadet, the pinball game that was included with Windows XP. That was the first title they developed for Maxis, originally as part of a bigger game called Full Tilt! Pinball. Pinball wasn’t something in Maxis’s wheelhouse, and Maxis bought the Texas-based studio so they could keep making these type of action-oriented games, which wasn’t the strong suit of a company that more often made games like SimFarm.1 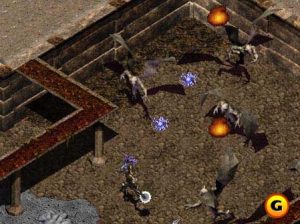 One of the only screenshots of Crucible, originally from a GameSpot retrospective on Maxis from 1999.4

As Maxis South, they had a few other action-y games in development, which were promoted at E3 1997. Crucible was a multiplayer fantasy role-playing game inspired by Diablo, where players would master the elements to fight the Shifters, monsters that could change the shape of the terrain. Another was Nightfall, a 3D sci-fi vehicle combat game that was supposed to simulate terraforming and extreme weather conditions.2,3 GameSpot also mentioned a game called Remnants.3 There’s no other information about this one, but it’s possible that it might be another version of Fathom, a color-matching puzzle game similar to 7 Colors. This game was never announced, but based on a prototype that leaked onto the internet, it looks like it was a follow-up to Marble Drop developed by much of the same team.

All of these projects were canceled when Electronic Arts finalized their acquisition of Maxis later that year and immediately shut down Maxis South.3,5,6

Attempting to pivot to action games with Cinematronics might not have been a great decision for Maxis, or at least it’s one that didn’t have enough time to come to fruition. Between a Diablo clone and two Full Tilt! Pinball games, Maxis South never seems to have had a direction besides making things that weren’t Sim games for the sake of growing the company. They did end up finishing three games for Maxis, and curiously, they all involve rolling balls. Besides the two pinball titles, their other game was Marble Drop, a stately puzzle game with gold-gilded rails and ink quills that’s about as far as you can get from Nightfall. 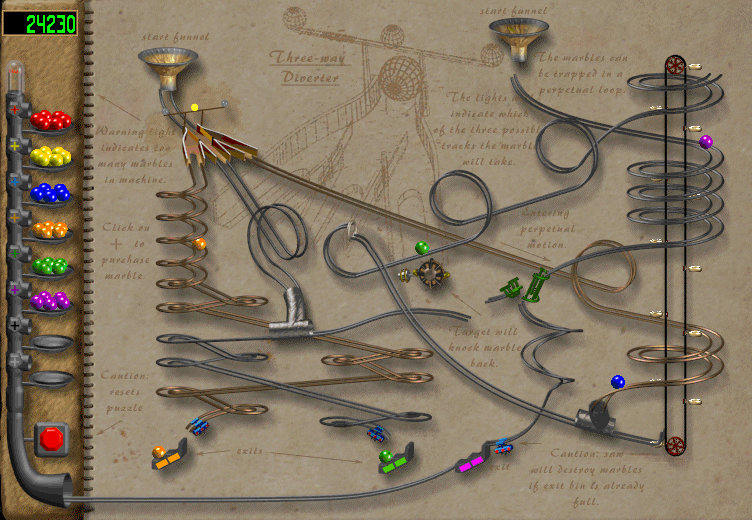 The goal of Marble Drop is to put colored marbles into the right slots by dropping them into a maze of chutes, tubes, and gadgets. It’s not quite a Rube Goldberg machine, but each level is an elaborate contraption with plenty of moving ramps, elevators, switches, cannons, crossbows, open flames, and spinning doohickeys. (Gotta love those doohickeys!) They’re presented like Renaissance-era drawings of machinery, as if this is what would happen if Leonardo da Vinci had invented the marble maze. The game gets a lot of mileage out of this clever theme, like adding handwritten notes to the background to explain what all the bits and bobs do, or just to poke fun at how needlessly over-engineered these marble mazes are.

As the marbles whirl through the machines, they trigger obstacles, which alter the maze for the next marbles that come through, like switching a ramp from pointing up to pointing down. The marbles might even loop through the maze, double back over their own paths, and go in a different direction next time. The game encourages you to lose as few marbles as possible, but it’s easy to buy more by using your points, which the game generously hands out for interacting with just about anything. The only real constraint is your patience.

The challenge is to figure out where the marbles are headed next. Which funnel do you drop them down? I found myself tracing their path with my finger touching the screen, like I was reading a maze book. 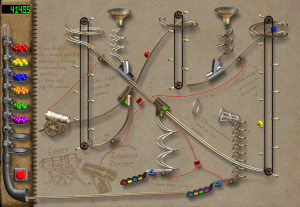 It’s a nifty idea at the crossroads of mazes and wacky physics. It takes focus to visualize where the marble’s going to roll – and to remember which chutes go where and what’s going to be set on fire. Then once you get the machine started, you get to see it actually go down the tubes in direction you wanted! Watching a marble spin down a spiral chute never gets old.

Notably, you can’t solve every level perfectly. The marbles are the only way to interact with the maze, so sometimes you’ll have to make a calculated choice to sacrifice a marble by getting it stuck in a permanent loop in order to activate something else. A particularly devious puzzle that pops up throughout the game requires you to open a lock to a bonus level by dropping marbles in a pattern that will intentionally screw up the optimal solution to the current stage. That’s satisfying in its own way to throw off the marble machines from their Da Vincian precision and still eventually come out on top.

The downside is that once I figured out the route for two or three marbles, depending on the level, I didn’t actually want to play through it. The best levels are dynamic and a little chaotic. Not all of them are. The same qualities that make Marble Drop a spatially interesting puzzle game also lend it to repetition. Even when the marble machines shift around and offer new twists as they progress – who doesn’t want to fire a marble cannon? – there’s only so many times you can run your finger over the same maze before you get the idea.

Marble Drop is a game that rewards careful, cautious play, dropping one marble at a time. Don’t you just wanna go apeshit though? Don’t you want to pour a dozen marbles down the tubes at once to see what happens?