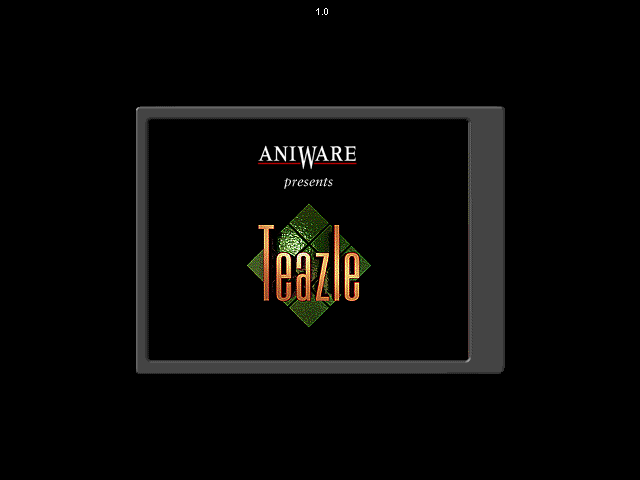 Part of the appeal of a minigame collection, I think, is that it offers a bite-size portion of a variety of different kinds of games. They last one minute, tops, and then you move on to a racing game,

or a trivia game, or a puzzle game, or just a game where you have to mash the buttons as fast as possible. A good minigame collection — like Bishi Bashi or the best Mario Parties — is like a good round of tapas, with different flavors and textures that complement each other.

Teazle contains 50 minigames, and while there’s a ton of variety, I’m still surprised how many of them involve math.

The organizing structure for this assortment of games is that you’re playing a board game. (The back of the CD case for the North American version of Teazle declares that it is “the first real board game for the computer,” which is such a radically untrue statement that I have no idea how to respond to it.) Each space on the 5×5 board is a randomly selected minigame, and whoever has the highest score or best time in each game claims that space. The first player to claim five spaces in a row wins. Teazle was designed for online multiplayer, and the game plays out in real-time, so while you’re busy playing one minigame, another player could be stealing your spaces right out from under your nose. I wasn’t able to play Teazle with other humans, but on paper, it sounds like it could be aggressive, every player trying to out-score each other to take strategic control of the board. 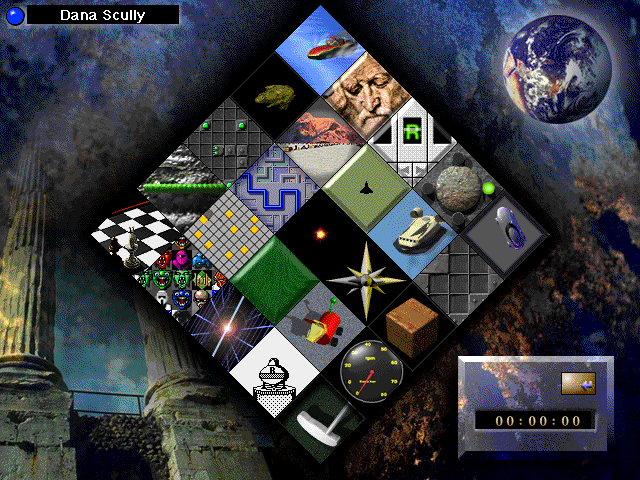 In order for this to work, the minigames have to be fun, or at least interesting enough to play the same ones over and over, and thankfully the diversity of minigames on display in Teazle is off the charts. Many of the minigames are riffs on well-known arcade game templates, like two different variations of Snake, one where the snake eats cheese (it is titled, fittingly, The CheeseSnake). Others are puzzles, like a block-shifting challenge reminiscent of the classic board game Rush Hour. And some of the minigames are just real-world games like minigolf or billiards. Even though I couldn’t get the full experience of playing against human opponents, I still loved the feeling that anything could happen when I clicked on the next game. 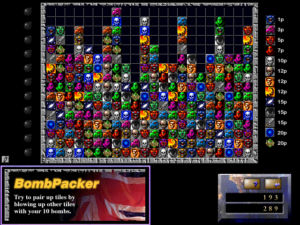 The creators of Teazle seem to have relished the opportunity to cram so many different ideas into one game, not just different minigame concepts but entirely different presentation styles. There’s a Lunar Lander clone that’s stylized to look like a black-and-white 80s Macintosh game; another game is a spaceship shoot-’em-up that looks like you’re playing it on an old PDA with a liquid-crystal display. Teazle makes the most out of the 640×480 screen resolution, cramming the game space full of small tiles and filling the rest of the dead space on the screen with your choice of weird imagery, like birds, or the Canadian flag, or a guy who looks like Chris Gaines (as featured in the emo-themed “Crow” backdrop).

It reminds me of a slower-paced version of Nintendo’s WarioWare games, which get their mileage out of jumping between simple, tiny games with wildly different playstyles and appearances. The minigames in Teazle are longer, but the game can still rapidly shift from a three-dimensional racing game to a wooden block puzzle to a space physics simulation. The variety is joyful, and it caught me off-guard in the best way. 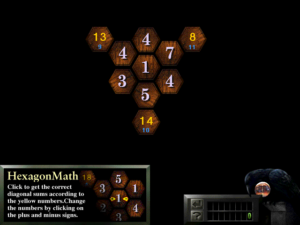 But every so often, there’s a real stinker. In the middle of the lively mixture of arcade games and brainteasers, Teazle has a handful of misfires that, if we can stretch out this tapas metaphor, are like biting into an unpitted olive. It’s not that they’re badly designed, but they’re so slow that they’re practically dead air compared to everything else on the board. The game has a fixation with number puzzles for some reason, and while I’m not against number puzzles, spending three minutes doing math feels like a relative waste of time when your opponents could be burning their way through the rest of the board.

Inevitably, a collection of fifty minigames will have a couple winners and a couple duds. The unique quality of Teazle is that the minigames are just tiles in a big game of Tic-Tac-Toe. Whether your path to victory goes through a Breakout clone or a math puzzle is half up to you and half up to luck. In theory, Teazle should accommodate multiple playstyles, depending on whether you want to play action games or thinking games, but the randomized game board guarantees that you’re going to have to win at least one type of minigame you’re not keen on.

Teazle is shooting for maximum variety, and while it can be a bit of a crapshoot, that’s also the most exciting part of this game, the first real board game for the computer.

UPDATE (12/28/21): We have an explanation for that wild claim about being the first computer board game! The original Swedish packaging for Teazle says that “Teazle is the first original Swedish party game for the computer.” [emphasis added] That’s more reasonable. It must have been lost in translation by the game’s North American publisher Global Star Software, which specialized in low-budget releases. Thanks @Walskaar for translating!