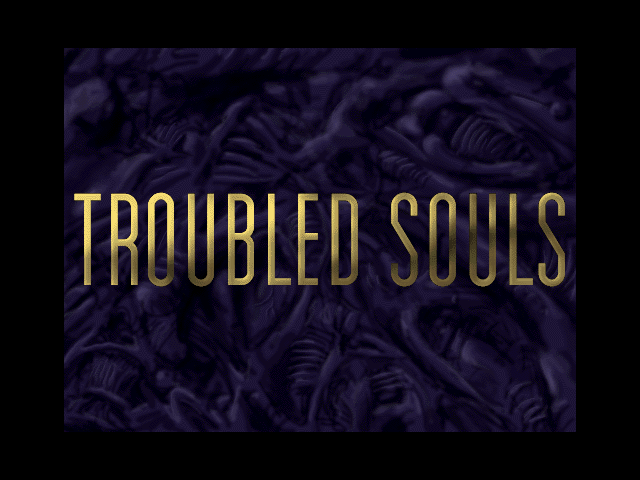 Loops and pathways have been institutionalized as puzzle mechanics, popping up in everything from classic board games like Tantrix to modern blockbusters such as Bioshock and Warframe. Something in our reptile brains loves connecting lines into bigger and bigger chains. But it’s telling that these puzzles have been relegated to minigames in recent years: they can be monotonous beyond short-term investment. How do you make these linking games fun?

The solution might lie within Troubled Souls, one of the better puzzle game derivatives from the 90s. Beyond its heavily Gothic, body horror-influenced theme, Troubled Souls adds a clever progression system and forgiving mechanics that keep the game lively and constantly moving. And as a bonus, it’s scary.

The goal of Troubled Souls is to build large, looping structures out of randomized pipeline pieces. Once you complete a loop, it disappears from the board and awards you points based on its length and complexity. A few oddball pieces, like swiveling corners and intersecting bridges, add variety and allow you to create complicated patterns. If the board fills up and your pipe queue grows too large, you lose. This should should feel familiar; it’s standard fare for many puzzle games. Games of this ilk can be fun for a limited time, but after more than a few minutes of this without any sort of meaningful structural change, they become a messy slog. Pieces pile up in inconvenient locations, and fatigue inevitably sets in. 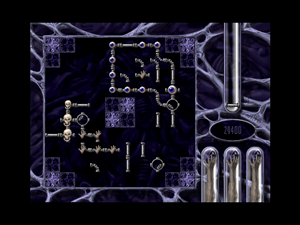 Unlike many games in this style, Troubled Souls allows you to pick up and swap any pipes that you have already placed in the board. This hugely alleviates issues of build-up and clutter. If you have a piece that doesn’t fit at the moment, you can stash it in a corner for later. And if your current pipe set isn’t working as you’d hoped, you can scrap or salvage it easily. Pieces feel like much less of a commitment this way, and errors no longer actively damage the experience. It adds leagues to the game’s long-term playability and appeal. But at the same time, it removes a lot of tension and rewards non-risky behavior.

To incentivize unusual and ambitious loop patterns, the game adds a new bonus system that rewards careful planning while preventing you from using every piece at once. Many of the pipes are adorned with body organs (such as hearts, eyes, and hands) and reward extra points – but each loop can only use one type of organ at once. In tandem with the ability to swap pieces out, this leads to a slew of exciting challenges and conundrums. What do you do with organ types that you aren’t actively using? Do you commit your organ pieces to a big loop that you might never complete? Troubled Souls feels exceptionally fluid and stimulating thanks to these minor changes, and they escalate your tendency to take risks and play boldly. This is especially true once the game incrementally adds obstacles and unusual board shapes.

But this game is nothing without its disturbing horror theme. As makes sense for a game that uses human organs as decorative objects, Troubled Souls goes full bore with Gothic aesthetics. The screen is constantly draped with test tubes and Giger-esque mechanical veins. Every interface object takes the form of a skull or an eyeball, usually some combination of both with gears and pipes and other steampunk-y accouterments. Your lives are represented by human arms holding beating hearts. Even the writing isn’t safe: instead of selecting your difficulty level, you “Choose Thy fate.” It’s pretty gross and mysterious and fun, and it feels somewhat unnerving in conjunction with the eerie background music and orchestral-sting-heavy sound design. Compared to other puzzle games that appear intentionally neutral, this one drips with creepiness and personality.

The skulls and spookiness make Troubled Souls memorable, but its tweaks to the traditional loop-based puzzle formula make it worth playing. It’s ultimately still a descendant of games like Loopz, but it renovates the central mechanics without resorting to a metagame. The game replaces the punishing, planning-focused approach of its forebears with a more dynamic rhythm that rewards adaptation and experimentation. This is one of the few games in this vein that I had a genuine interest in revisiting for fun, and developer Randy Reddig deserves credit for figuring out how to fix them.