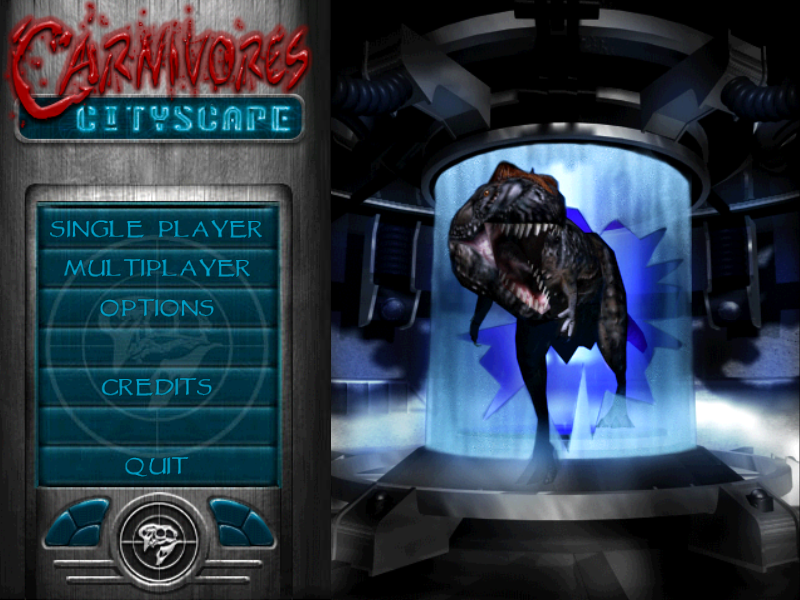 Getting to play as a dinosaur was new for the Carnivores series. The first three Carnivores games, developed by Ukrainian studio Action Forms, were hunting games, set on a distant planet inhabited by dinosaurs that humans have turned into a game reserve. Cityscape is vastly different, more like a sci-fi action movie where the prey and the hunters stalk each other through jungles and cities.

According to the producers of Cityscape, this drastic change in direction was based on fan feedback. In an interview with the online gaming site HomeLAN, the producers said that fans of the Carnivores series had demanded two features: playable dinosaurs (who can blame them?) and multiplayer. Cityscape adds both those things, which explains why the game is closer to Predator than a hunting simulation. That also might explain why rampaging around as a dinosaur – the ultimate power fantasy – is so weirdly unsatisfying. 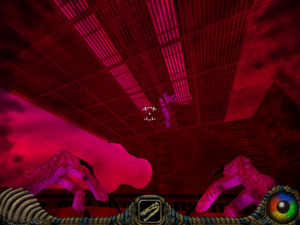 Activate Dino Vision to track your meals in the dark

The new developer, Sunstorm Interactive, was a perfect fit for taking over the Carnivores franchise. Not only did they have experience making hunting games, they had even made, specifically, a dinosaur hunting game, Primal Prey, which is the best qualification you could ask for. But rather than continue the series as it was, they let the dinosaurs fight back.

When DinoCorp’s plans go horribly awry, they accidentally unleash dinosaurs on a human colony, and a military operation is called in to clean up the damage. The game lets you play through the campaign from either side of the battle, and they mirror each other: you go through the same levels, but with opposite goals. As a human, you need to complete objectives, like escorting a senator to safety; as a dinosaur, you just have to eat stuff, like senators. It’s a clever touch, even though that means the dinosaur missions are exclusively about where to get lunch.

Despite the emphasis turning the tables, it gives the impression that dinosaurs were an afterthought in this game. While humans get all manner of fancy sci-fi gadgets and weapons, dinosaurs are much simpler. They just have claws and run fast, and their Dino Vision power is a hand-me-down version of the thermal camera used by the humans. On the other hand though, dinosaurs can eat humans to regain health, which is gross and awesome. 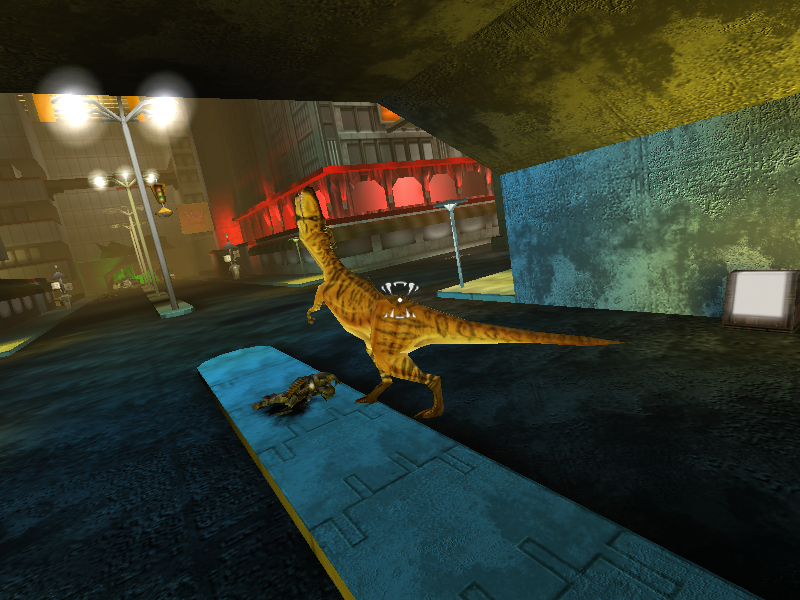 I’m focusing on the dinosaur side of the game because playing as a human is pretty much what you’d imagine – perhaps slow and awkward, but about what you’d expect out of a sci-fi dinosaur-killing game from 2002. Playing as a dinosaur, however, never rises to the level of chaos that it should. There’s glimmers of it, like the outstanding City Hall level, where you chase the senator through his office while he screams in terror at the “evil bird lizard.” Many of the indoor levels feel closer to the claustrophobic disaster movie atmosphere that the developers were going for, but it really depends on how interesting the level geometry is, if it gives you opportunities to hide and pounce. Otherwise you’re wide out in the open, waiting to be shot like an animal at a game reserve.

Most of Cityscape takes place inside one massive futuristic city, through streets, buildings, and underground tunnels. The city looks terrific, especially because its hulking angular shape seems like it would be impossible to actually live in; it’s interesting simply to run around the city as a dinosaur. The weird part is how much empty space there is. If you walk off in the wrong direction, you could end up in a completely vacant wing of a building. It doesn’t feel like there’s much to destroy or defend. 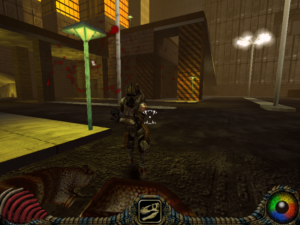 The city is desolate, apart from an occasional train passing by or a computer monitor left unattended. Whether you’re playing as a human or a dinosaur, there will only be one or two enemies nearby, at most. The sparse population feels appropriate in close quarters, like the inside of a crashed spaceship, but in the enormous city, it’s bizarre. You’ll turn on Dino Vision and see a single human shooting at you from hundreds of feet away, and once again, you’re back in a hunting game, only this time you’re the prey, in a city instead of an open wilderness.

All this seems like it could be a consequence of how the Carnivores series changed direction. Maybe the developers hadn’t known what to do with the dinosaurs now that they weren’t just moving targets, but the biggest change is that Cityscape was the first and only Carnivores game designed with multiplayer in mind. The stages were meant to be filled with the kinetic energy of multiple people. Playing alone throws off that balance. It reminded me of logging into a nearly empty server in an online game and trying to find where the other players were.

In multiplayer, you can play the campaign cooperatively with other players, but you can actually play it against other players too, with up to eight people on each side. Cityscape probably never found an active enough audience to support a 16-player campaign, so it’s hard to say if the ideal version of Cityscape ever really existed.

In that theoretical scenario, the game would have roared to life. One dinosaur running around the city feels barren. Eight dinosaurs? Now we’re talking.