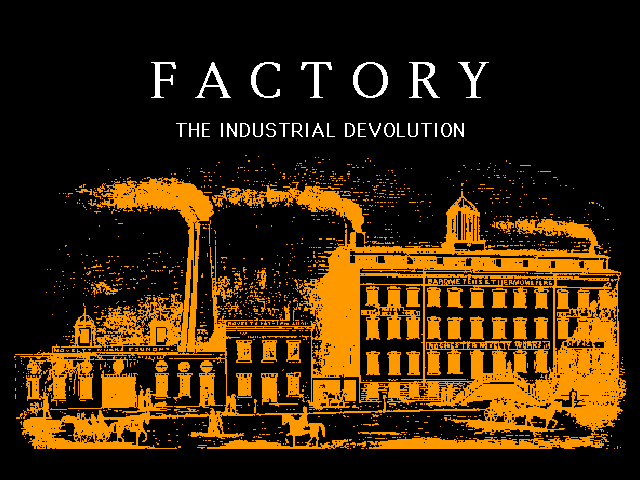 When factory automation was ramping up, the 1993 game Factory: The Industrial Devolution imagined what could go wrong. When all work has been automated and nobody needs a job anymore, what happens when the machines that build everything break down?

The answer, according to Factory, is the most stressful job on earth. You’re a specialist called in to operate broken factories, manually routing products around so kids will get their boxes of cereal on time. The last time the cereal plant shut down, the kids went on a riot.

There are some creepy implications in that premise about the distant future of consumerism. Mostly, that stays in the manual. In its heart, Factory is a hectic multitasking challenge that always goes wrong, and it drags you along for fun.

The assembly line starts simple on purpose. Factory comes with one calendar month to complete, December, and the first product of the month is mouthwash. The bottles and caps come down the belt together, and all you have to worry about is sorting them onto the right tracks. A dispenser will automatically place caps on the bottles as they roll by. With just two items to think about, it serves as an easy introduction to how the factories operate. 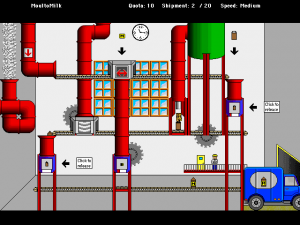 All this assembly for a carton of milk

It gets busier from there. The next days have more pieces in the workflow. On day 9, for a box of a pastries, there are two varieties of baked goods to separate into three-packs, plus the actual box to send out once the pastries are ready. Eventually, the dispensers go away too, replaced with individual slots that hold one item at a time that you have to release manually. The number of buttons to track seems to go up every level.

Factory makes excellent use of the full dimensions of the screen. The assembly line moves vertically and horizontally, giving each step of the sorting process a sense of location. On day 15 – burgers – each ingredient goes down its own column, so it’s easy to remember where each one goes or comes from. The game fills empty space with background objects like windows, gears, smokestacks, and an angry foreman, suggesting, even during the simpler stages, a full factory constantly in motion.

In reality, the factory starts off dead slow. But the clock keeps running, so you have to adjust the speed of the assembly line to get enough products out before closing time. It would be nice if there was a less cumbersome keyboard command for changing speeds and if it gave you more granular control than slow, medium, and fast (which is relentless).

Even at slower speeds, something will inevitably go wrong, and that’s when the fun begins. You will mess something up, no matter what, and once a mistake happens, it just keeps getting worse.

Let’s say you’re making toothpaste, and you accidentally put a box in the chute where the toothpaste tubes go. A smashed-up box will come out the other end. But then it keeps going down the line! The machines will try to put a cap on it, which wastes a cap. Then it’ll get boxed up again – a second box wasted. Then it’ll go on the delivery truck! It keeps destroying resources all the way through unless you remember to shut down parts of the factory. But you have to remember to turn the machines back on, because while you’re distracted addressing the damage caused by this horrible errant box, another box is coming down the assembly line, inflicting more havoc. 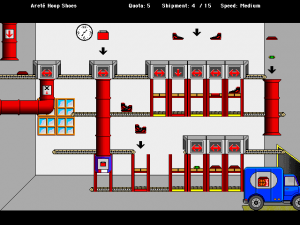 As the game advances, the factories have fewer automatic parts

This is an escalating chain reaction of chaos. It easily runs out of control. Although awful to deal with, it’s also hilarious to watch from the inside. Everything’s screwed up, it’s totally your fault, and you just have to laugh and accept it. And to your employer’s credit, they don’t care about waste as long as you meet your quota by the end of the day. (Though they’ll dock your paycheck.)

There’s good satisfaction in getting a shipment out on time. You managed a complex system efficiently, reined in chaos, beat the clock, and made something! Even for a fake pair of shoes, your work feels productive.

But this job is terrible, right? Factory: The Industrial Devolution seems right on the verge of being a satire about industrial labor, with or without the manual’s backstory, because of the ridiculous machines you have to contend with in order to assemble a toilet. If your effort has any takeaway, it’s that even at the point of absurdity, it feels good to get your work under control.