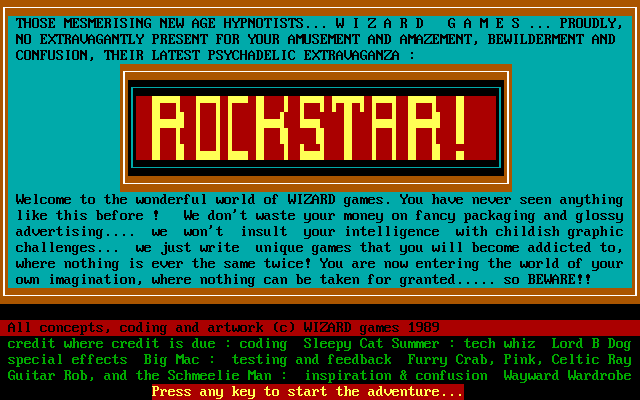 The refrain about sex, drugs, and rock and roll sticks around for a reason. Exaggerated as they often might be, the most legendary music tales are remembered for their behind-the-scenes disputes and carnage rather than the songs. Games about joining a band usually focus on the performance side, though, or at least tell a neater story with a bus breakdown or out-of-control party thrown in for flavor.

Your group comes from the local scene of an unspecified 1980s United Kingdom town. Your specific style never matters – this omission gets funnier as the game goes on – so you can picture anything between Joy Division and Iron Maiden. One hundred other bands like The Snack Men, Mensa 200, and Dog Piss compete for global attention as you write, rehearse, cut albums, make videos, and tour across the world. You choose how to spend your time alone and with the band, balancing the need to work the craft with your personal well-being.

Actions in Rockstar! last about one week, longer for deep recording sessions, concert commitments, or breaks. As this time passes, the game keeps you clued to your band’s activities and other happenings in the industry, like critical publications and album releases. The game represents all this solely through text, and it works excellently: the management interface is simultaneously busy, colorful, and highly readable. 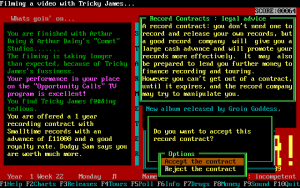 Plenty of exciting options – but are they right for the band?

Your band starts out playing at pubs and publishing poorly mastered albums, but as people take notice, you begin fielding more serious offers. A radio station might request an appearance, for instance, or a major artist could offer a high-exposure, low-pay gig as their opener on an international tour. The band’s future hinges on these risk-or-opportunity choices, the biggest of which may be whether to sign to a record label and live under their contract. Fame never happens overnight in Rockstar!, and the payoff of superstardom only arrives after years of well-considered decisions.

The real action happens between those decisions, when your musical career devolves into an extended, violent bender. Recording sessions inevitably end with your bandmates coming to blows and calling their producer “disgracefully horrible” while labels release the music behind your back. Then, while on the road between concerts, you’ll be constantly pressured to join some underground “wild party” or take amphetamines. In fact, with the time commitment of touring, picking out drugs and parties quickly becomes your main activity. The game considers these your primary source of personal entertainment, too, so you need to indulge in a certain level of vice to stay sociable and happy. (Think about the implications of the option that lets you manage your regular substance intake by reducing it or increasing it.)

This lifestyle can only end in disaster for yourself and for the band, but Rockstar! just has so much fun with it that you can’t help but be curious. The situations you encounter are randomly generated, setting up some ridiculous scenarios: this is certainly the only game where you can drop LSD before appearing on a children’s television show. Surely most rock bands went off the rails at some point, but little here resembles a real music experience. It’s an absolute riot – up to a point. 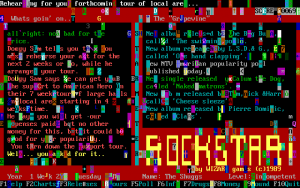 Hallucinatory effects stack up alongside your poor choices

Eventually, the mayhem has to stop, and the game doesn’t quite know how to dismount from there tactfully. Your reckless lifestyle eventually catches up to you, but Rockstar! never lets up on the cavalier attitude towards your self-destruction. Long-term addiction and health scares get treated like jokes, with visits to the hospital used as opportunities for sexist jokes about nurses and suicide greeted as “the ultimate trip.” In a stunningly insensitive example, you can risk contracting AIDS after too much casual sex, and the game plays this like a punchline. Given the disease’s significant social stigma when Rockstar! was released in 1989 (and still), lightly throwing it out like that is cruel.

The flippant tone deprives these moments of the effect they should have on your band. Pausing your career to enter rehab should be a wake-up call for the band to rein in their excesses and get back to music, but when the game mocks the rehab experience as boring, it feels more like a punishment. Nothing puts the brakes on the game’s id to remind you that, yes, you are screwing things up.

On the other hand, who actually cares about their music career? If you keep yourself under control, there’s some fun in watching your band climb the charts and expand its popularity overseas, but the managerial parts of the game often feel slight on their own. They’re almost like set dressing for the gross, wild, over-the-top debauchery where Rockstar!‘s heart clearly lies. This is really a game about doing drugs where you also happen to be in a band.