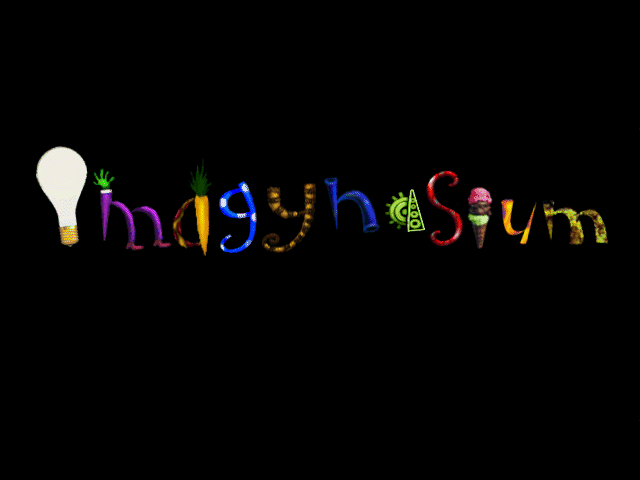 How do you teach creativity? Educational software too often gives children a blank canvas for art without inspiring them to use it – not just painting or making music but doing it with purpose and an idea. Constraint and direction aren’t flashy, but they’re undervalued.

Imagynasium is a masterclass in meaningful creativity. It shows how to find art in circumstance, like a deep interest or a scarcity of supplies. Rather than throw players into a bottomless toolbox, it teaches the value of drawing from your environment. Any program can let you paint a picture; Imagynasium helps you figure out why you would want to.

The Imagynasium is a virtual city made to cater to whims of imagination. Think of it as a giant artists’ retreat suspended in space. Tucked around its surreal, Seussian architecture, you’ll find a handful of characters like Frida and Spike who will guide you around the Imagynasium and show you its tools. Each neighborhood works in a different medium. Mondo’s Curio Shop, for instance, specializes in storytelling, while Roxie makes animations downtown. The streets and buildings look like collage art murals, giving the city the same off-kilter DIY spirit as its residents. 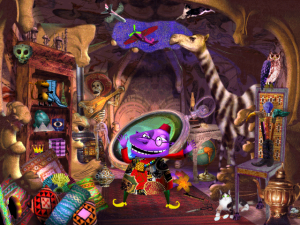 Meet Mondo and his assortment of canvas-ready knick-knacks

(Those characters have an outstanding voice cast led by Jonathan Winters and Glenn Close in her only game role. Despite the ensemble of loud, talkative personalities, they’re never grating or overbearing, and their rambling dialogue feels like natural conversation. Kudos to the writers and actors!)

Another game might use this conceit as an elaborate, well-disguised menu, but Imagynasium ties the setting to the art tools. Whether you’re making music, animating a scene, or writing a story, you primarily use assets you’ve found somewhere in the Imagynasium. Nearly every object in the pop art city is associated with a picture, a sound, and a word that can be copied into a keepsake box for later – a faucet might offer a puddle, the sound of water, and the word “wet” – but you can’t hold more than about two dozen concepts at a time. Once you head into a studio, those handful of objects and ideas become your palette.

It’s brilliant. Instead of leaving you to doodle or to experiment, Imagynasium challenges you to create something original from whatever you’ve stumbled across. It encourages purposeful art derived from what resonates with you in your surroundings. The forced resource selectiveness shows the merit of an economical art language, and the urge for different objects sets off a sense of curious exploration that, frankly, you don’t get from an unstructured toolset. Focused creativity has to come from within, and rather than assume you bring your own spark, Imagynasium prods you to find it. 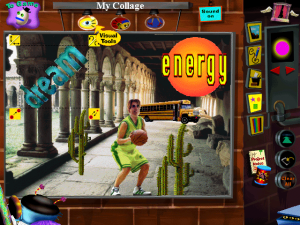 It’s not great art, but each of those graphics came from somewhere

In its most honest insight, Imagynasium admits that its tools cannot replace inspiration. “This is a great place to come and be creative,” Frida admits in a tutorial, “but you don’t have to stop when you go back to the real world. Life’s got more zing when you let your brain play around no matter where you are.” To this end, the game includes general creativity prompts called “Brain Boosters” (featured in each studio to get the ball rolling) and printable “Take Out” craft experiments that use everyday objects. Both reinforce that the ethos of limit-pushing imagination extends beyond the program’s confines. The developers would surely be tickled if outside ideas found their way back to Imagynasium, but the goal here is clearly an altruistic one: children need the find inner motivation to become creative on their own.

The attempted conversion from digital playaround to practical skill is smart – in terms of usefulness as well as by acknowledging the limits of creativity tools. The Imagynasium’s project builders are all more complicated than other playthings, with the Sound Studio music kit standing out as particularly unintuitive. They’re more powerful than alternatives, though, and this can push you to make something interesting with the available options. (Each studio does feature a small game that stealthily teaches how to use its features, but they’re an inessential bonus.) Still, the complexity doesn’t quite jive with the mission of freeing imagination.

Even when it’s intimidating, the curious world of Imagynasium taps into everyone’s latent artistic aspirations by demonstrating what can be done with a limited vocabulary. Constraints do foster inventiveness, and in contrast with so many educational art programs content to leave kids to mess around with a blank screen, Imagynasium‘s environmental limitations and colorful guiding hands heighten your understanding of what ideas speak to you. Kids might not process that, but it works. Visiting this city could have a bigger effect on imagination than any other digital paintbrush.

Imagynasium was produced by Robert Redford’s Sundance Institute (making this, like Close, his sole credited game) and developed with support from Harvard University’s Project Zero multiple intelligences research group. Those are some serious credentials that explain a lot about why this came out as well as it did.