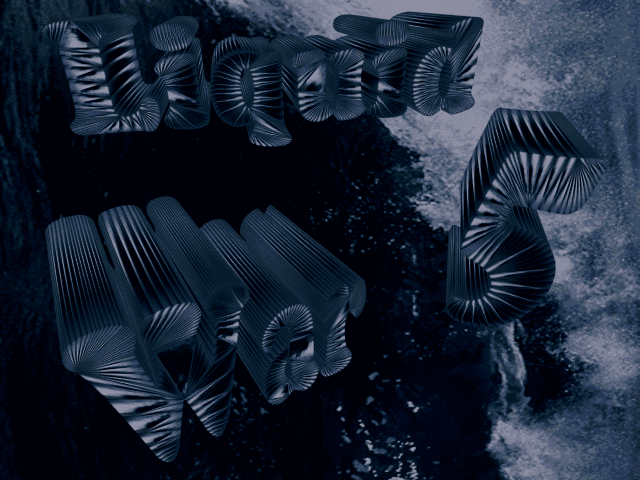 The minimap in a strategy game shrinks a huge war into the size of a small window. At such a large scale, whether set in ancient Rome or a distant planet, any battle will look like thousands of multicolored dots running around. In a way, it boils the strategy game genre down to its most basic pieces – fighting dots.

Liquid War 5 totally embraces that reduction and runs with it. You control a liquid made up of hundreds of particles, fighting against other liquids. (Maybe it’s more like those web games where you play with a fountain of powder.) It gets the beats of a big battle in the simplest terms, mixed with the weird sensory experience of being a puddle of goop.

Liquid War started as the generic strategy game it resembles at first glance. Thomas Colcombet (Thom-Thom) created the first prototype of Liquid War in 1995 as a programming test for character path-finding; his friend Christian Manduit expanded on it, though by his own admission earlier versions were unstable and nearly unplayable. Liquid War 5, possibly the first good version, debuted in 1998 and stayed in development for about a decade before Manduit started on Liquid War 6. (This post is based on version 5.6.3, the penultimate release, because the final release has a strange graphics issue.) 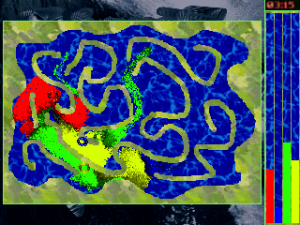 Mixed up, clumped up

Since those earliest versions, Liquid War has had the same core strategy. When two liquids collide, they try to consume each other. That’s easier when the liquids are thinner and moving around. If two liquids hit head-on, they stop, thicken, and clot, causing a stalemate. To really rough up another liquid, you need to attack it from multiple angles, forcing it to spread out and thin out.

On a wide-open map, a liquid war is a big frantic rush to clobber each other with little room for creativity, like a bunch of lions fighting in a coliseum. Most maps generally have more going on – more interesting geometry to navigate your cursor around. The default Liquid War stage (called “genuine” by the game) is a great example; it’s built out of pipes, alcoves, and obstacles, creating places for liquids to seep through, clog up, and fight around each other. You frequently have multiple ways to move and, consequently, multiple ways to be attacked.

The 150 maps in Liquid War 5 create slightly different strategies. Their variety defines the flow of the game. Map #25, Fish, has dozens of half-circle shapes that catch your cursor if you try moving against them. Pool and Pipes consists of small pods connected by wirey tubes that constrict the flow of your liquid as you trickle it through the web-like layout. In all of them, control of passageways equals control of the map and control of the game. See the brilliant map Computer, where a razor-thin grid on top of the usual obstacles gives liquids a tight path to go anywhere on the map; oozing into the grid is critical. (It must also be acknowledged that one map contains a racist drawing. It’s uncomfortable that the developers felt okay including it.) 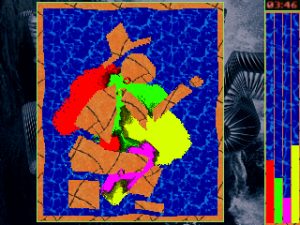 Unique map patterns, like this sitting man, give every match its own playbook

Liquid War 5 is at its most energetic with four or five liquids trying to encircle each other. When just two liquids remain, they get in slow head-to-head standoff where every little movement or calculated decision to back off can upend the field. By the developer’s own admission, the computer opponent “has no strategy at all” [link] – maybe not an ideal fit for a game that ends like this, but the AI’s variable aggression levels (and other tweakable game logic factors, like how quickly liquid recovers from fighting) are surprising anyway. Worst case, it always ends after four minutes.

You start to think like a liquid after playing for a while, if that’s possible. The game sloshes back and forth with water sounds and a slightly nauseating visual effect as your liquid flows into whatever space it can reach. Maps have a corporate PowerPoint theme aesthetic that pulls you deeper into the game’s watery character (minus the wonderful, stranger maps, like a chart of the solar system).

Though you could turn off all the effects and play it like a minimap from a more straight-laced war game, all the embellishments give you a better idea of how the game should be played. Its strategy involves keeping track of where and how all your particles are drifting around. It’s easier if you imagine yourself as a puddle that can expand, split, spill over, and fill up nooks and crannies.

Normally, when you quit Liquid War 5, the game gives the polite message “Thanks for playing Liquid War! I hope you enjoyed it.” If the game crashes for some reason, it instead says “Thanks for trying to play Liquid War… I’m sorry for the trouble it’s causing you.”