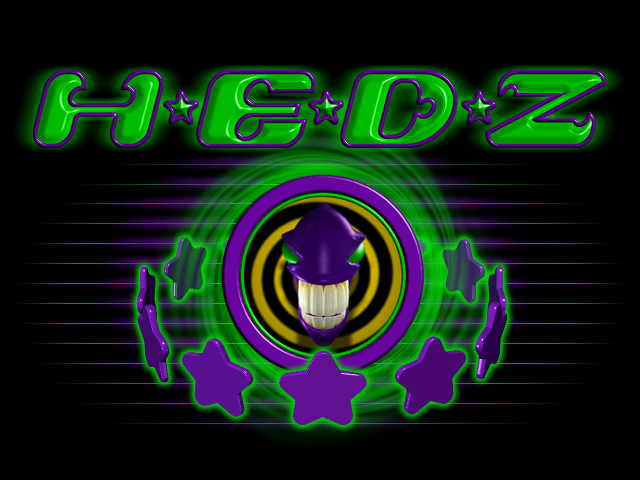 How many different playable characters should reasonably fit into a game? 10? 20? As high as 50?

H.E.D.Z. from Hasbro Interactive has a preposterous 225 playable characters. That’s 74 more than the original number of Pokémon in Pokémon Red and Blue, released in the United States just one month earlier, and 117 more characters than the famously huge cast of the role-playing game series Suikoden.

…and that’s about all it has for ideas. But what an extraordinarily strange group of characters it puts together.

The 225 characters are actually different heads, harvested by aliens to use in an arena battle game. The weird purple aliens have traveled throughout time, abducting people and creatures throughout Earth’s history and taking their heads off (thankfully, we don’t see the heads getting extracted). When they put on a head, they inherit its power, appearance, and personality, some of which are more useful for fighting than others.

The character list just goes all over the place. There’s a Commando and some other potentially violent professions such as Chicago Gangster and Gold Miner. A few characters are based on real people without their names used, like Short French General, obviously supposed to be Napoleon, and Rock ‘N’ Roller instead of Elvis. 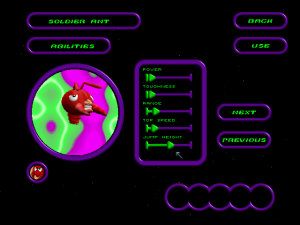 Soldier Ant, one of the many weird characters in H.E.D.Z.

Then it gets weirder:

Some of them are borderline nonsense:

One very relatable character is just a guy having a panic attack named Panic Attack. My personal favorite is Snow Plough Operator, who rides around in a plow, runs people over, and sprays snow.

The lineup reminded me of the video game ideas my brother and I made up when we were kids. When the time came to make up characters, we would start writing down every concept we could possibly think of until we had a list of hundreds of names, most of which were random nouns. H.E.D.Z. is like that, but for real, with a budget, a publisher, and a television ad. There’s something wonderfully ridiculous about a major company publishing an action game where you can play as a green grocer. 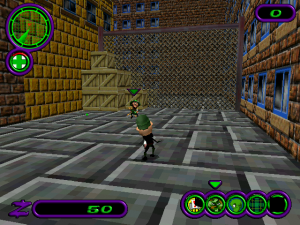 On the alien battle asteroids, it’s shoot or be shot

As you play H.E.D.Z., you unlock more heads by stealing them from other aliens after you beat them. They’re like collectible toys, and they have the sort of safe edginess of 90s toys like Crazy Bones. It’s not surprising that Hasbro took up the concept. (Seriously, watch that ad. It looks like a toy commercial.) According to a press report, they wanted to expand on the collectible aspect with new downloadable characters to buy, long before that was an industry-standard feature, though their plans never seemed to transpire. Still, that’s already an awful lot of characters to collect.

Unfortunately, the game doesn’t do much with them. When you enter a battle, you can select five heads to switch between, and you lose if all five are defeated. Creating 225 totally unique characters would have been unfeasible, so they draw from a handful of archetypes; they have some interesting abilities, like the heads with turbo speed, big jumps, or vehicles, and especially the Medic class, which absorbs the damage from your other heads. But for the most part, they have a single power – they shoot something or they throw something – and that gets old really fast.

The single-player mode pits you against room after room of aliens, and regardless of who you select or what unusual weapon they use, every fight feels identical. After about ten minutes, you’ll have seen the extent of the dull, repetitive battles. The few fun spots come when an enemy runs away and has to be chased down, if only for the variety. The expansive, bizarre character roster deserves action that’s far less predictable. 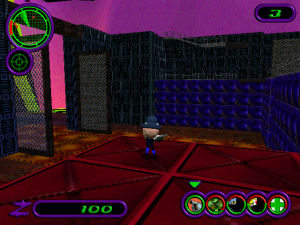 The Warehouse stage has tiers of walkways and gateways

One bright spot is the game’s level design, an artifact from the early days of 3D games. The stages you fight in have rudimentary, angular layouts, like the work of developers still learning the best approach to creating 3D levels. That’s a good thing, because it gives them this unfocused energy. The stages have huge rooms, big ramps, moving platforms, elevators, piles of boxes to climb up, and bridges that cross over earlier parts of the stage just to show that you’ve moved upwards. They’re full of corny elements, like giant flashing buttons that open up new parts of the stage. It’s on the same page as platform games on the PlayStation and Nintendo 64, where the idea of making a 3D game seemed infectious all on its own. And the stages try to make better use of the characters with interesting mobility powers, much more than the combat does, such as hiding bonus heads in hard-to-reach locations.

That isn’t quite enough, though. If there’s a reason to stick with H.E.D.Z., it’s for the sake of seeing what heads show up next and how on earth the game makes them all into playable characters. Seriously, how the hell is the green grocer supposed to work?

The game may be better in multiplayer, playing with the characters like the toys they’re meant to be – with friends, messing around, not caring about the quality of the game because you can stage a fight between an ice cream man and a pterodactyl.