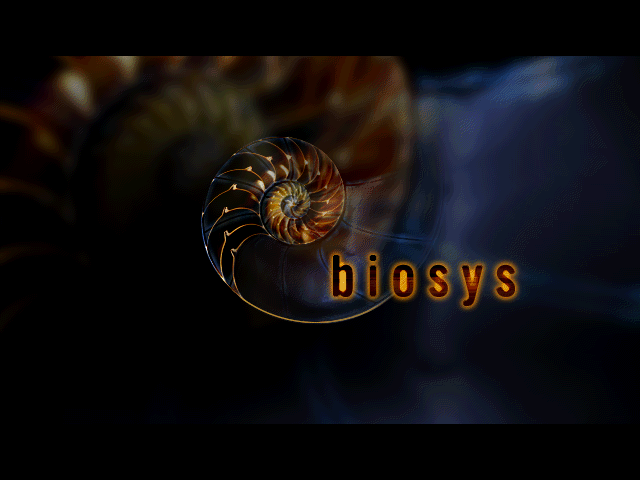 On its face, Biosys hits all the clichés of a mystery first-person adventure game. You wake up with no memory. Something has gone disastrously wrong. The last survivors left clues and diaries that explain what happened. We’ve heard this story many times before in many similar games. But it’s a template, and Biosys takes the clichés in an unexpected, genre-twisting direction with one hell of a setting.

The entire game takes place in a self-contained biosphere experiment. Instead of using that solely as a backdrop, Biosys simulates the artificial environment – temperature, humidity, water level, plant growth, the systems powering the biosphere – and makes it an integral part of the game. It creates a simulation in the form of a mystery adventure game, attempting an unusual, ungainly cross between adventure and earth science. Parts of the experience even seem like a precursor to the survival game genre. The game has some trouble balancing those elements, but it shows how elastic the adventure format can be. 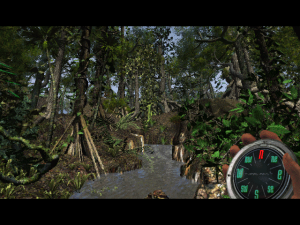 The science experiment you’ve become trapped in, Biosphere 4, has four separate biomes. The game simulates each of their atmospheres, plus the infrastructure powering the biosphere complex. You awaken in the Rainforest biome, and although it seems like a normal rainforest initially, the signs of an artificial environment show up right away. Along the path down to a sunken, flooded lake, beat-up metal devices stick out of the ground, displaying readings about the temperature and the air quality, even the sunlight levels. Yes, the game really does measure all that. It comes off as excessive at first since it doesn’t affect you. But then, the game warns you that you’re thirsty.

In addition to simulating the biosphere, Biosys tracks your health. You get hungry if you don’t eat. You get tired without sleep. If you stay in a polluted environment for too long, you have trouble breathing, followed by permanent lung damage that impairs your energy. (To show its dedication to detail, if you eat too much emergency canned corn beef, you develop high blood pressure. Amazing.) Your first priority is to stay alive long enough to figure out where you are and what’s happening.

Decades removed from Biosys‘s release, there’s a glut of survival games, and these elements must sound stereotypical. In 1999, mystery adventure games like Atlantis: The Lost Tales and Amerzone continued to mimic the inquisitive pace of Myst, and in that context, these ideas were inventive; in tandem with the game’s ecosystems, they’re still inventive today.

The biosphere simulation constantly informs the game world. Sometimes, it happens very visibly, like when you’re searching for food. An avocado tree is a solid, reliable source of nutrition, and when you find one, the game will tell you about the tree’s health and how well the fruit will grow back in the current climate. The simulation often works more quietly in ways that you don’t notice until much later. For a significant chunk of the game, so much of this information appears to be irrelevant, window-dressing at best, so the noticeable highlights, like the health of an avocado tree, keep it in the front of your mind. 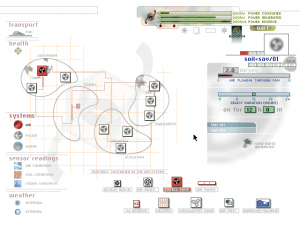 Computer schematics reveal the intricacy of the biosphere model

Every detail fits together at the Commander Center, the central hub of Biosphere 4. Dr. Alan Russell, the founder of the biosphere, managed the facility from this location. With his equipment, you see how the different parts of the game interact – not only the systems that run Biosphere 4 but the medical devices for treating your lung problem, or a tiny kitchen for cooking the food you gathered.

Having the big picture of the simulated environment is eye-opening, and it changes how to approach the game. From Dr. Russell’s computer, you can see the whole biosphere, all the systems connecting together, the locations of the reverse osmosis machines and the levels on the oxygen tanks. Environmental cause-and-effect is more apparent: I left open the hatch that connected the rainforest to the toxic Evolution biome, and the rainforest got polluted. I knew I couldn’t use it as a safe area anymore, and I had to rely on the Savannah biome for food instead based on whatever plants the computer database said were okay to eat there. Or if the rainforest heating system blows out and needs a new fuse for repairs, you could decide, based on the data, what other system you’re willing to shut down and salvage. The Ocean biome doesn’t really need a wave machine, right? …right?

These are different sorts of puzzles, less deduction and more about your interactions with a simulation that’s happening all around you. It’s like SimEarth that you can walk through.

Biosys has the other type of puzzles too, the ones you’d expect in an adventure game – like finding items to unlock new paths. 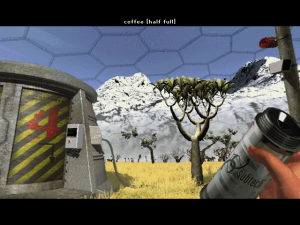 Sometimes you luck out and find a thermos of coffee

And exploring, of course. Biosys is startlingly beautiful at times. As the game clock runs, the sun rises and sets, coating the tree canopies in dim light and inviting the fireflies out after dusk. The sharp, backlit sensor monitors cut through the haze, and wherever you go, a geodesic dome stretches overhead to remind you that this is not a natural environment. Occasionally, Biosys delves into the strangeness of this unnatural-natural world. One crucial scene unfolds inside a hallucination where, somehow, you bring a “metal apple” back to the real world. In the second half of the game, you are stalked by a synthetic plant monster that feasts on the air in your lungs – a bizarre corruption of nature.

The game hits its stride when it balances the survival simulation with this sense of discovery and adventure. It inspires miniature survival stories that intersect with the narrative, like walking across the savannah looking for fresh fruit and an access tunnel.

Your first visit to Club Eden is a perfect example. Club Eden was a luxury resort built in the Evolution biome against Dr. Russell’s wishes by the biosphere’s corporate financiers, and now it has fallen to ruin. There are mysteries to uncover in its flaming, collapsed wreckage, but the atmosphere is extremely hazardous. You must weigh the need to explore against your declining health and the freezing temperature. It’s a haunting situation that twists the standard adventure game investigation into a battle against the elements.

Biosys often can’t decide the best way to emphasize those different qualities. The drudgery side of survival takes over the game too frequently. Every move forward takes a little bit of energy – more energy if you’re carrying a lot of weight – and it’s too easy to accidentally exhaust yourself by going the wrong way while holding too many items. It forces you to take a crappy nap on the floor every two minutes to muster the energy to keep moving. One puzzle near the end of the game, which involves lugging a heavy oxygen tank between biomes, is particularly draining and an unnecessary waste of time. Biosys wants you to explore the biosphere (you can use a bulky sleeping bag item to get a solid rest anywhere you go, and certain foods have the same effect as medicines if you’d prefer to forage for them), but its survivalist tendencies are punishing enough to encourage constant saving and reloading rather than experimentation. 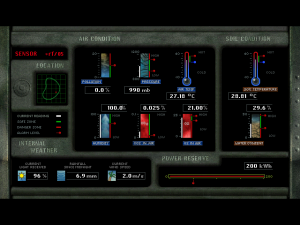 This tilts the other way too. When the game drifts too far into adventure game tropes, it sinks under the clichés. The passwords that unlock each of the biomes are arbitrarily hidden in poetry and dream sequences. Audio journals and video tapes are such a regular crutch for storytelling that it gets funny to come across yet another one.

I still enjoyed the story of scientific corporate scheming, but frustratingly, the game has an intriguing narrative hook that it doesn’t develop. As you discover, Dr. Russell intentionally destroyed the Evolution biome to stop the plant monsters, killing all the workers at Club Eden, and he may have been involved in an assassination. In a well-executed twist, revealed when you look in the mirror, you are Dr. Russell. But the game doesn’t dwell on the uncertainty of playing hero in the body and mind of a treacherous murderer.

The focus always comes back to the simulation. At the very end of the game, Biosys throws in a surprise: the final goal is to bring life back to the Evolution biome. For all practical purposes, the game turns into a full-on environmental management sim at this point, albeit one where you have to eat and sleep. It’s pretty boring, because you spend a lot of time just sitting around eating tinned meat and waiting for the air quality to improve. Again, it reflects the game’s difficulty doing justice both to its adventure and its simulation aspects.

Yet as a culmination of the game’s take on the adventure genre as a science experiment, it’s just about right. Biosys has the audacity to build the whole simulation in service of an adventure game, and at the end, the simulation is where it finally returns. This was always a game about the biosphere.

Jumpstart Solutions did their homework. The credits for Biosys indicate that the developer consulted with Biospheres LLC, a company run by the founder of Biosphere 2, as well as three people credited for “Ecological Research.”