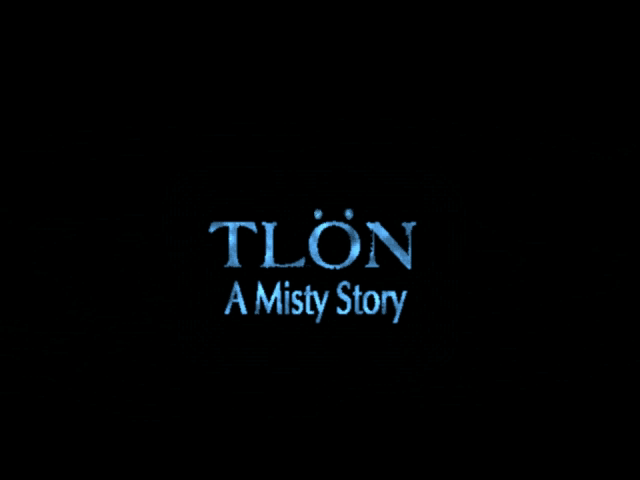 Tlön: A Misty Story shares a rumored mythical world with that name, though it bears only the most superficial resemblance to Borges’s story – or its philosophical achievement. That the game ignores the great piece of literature that inspired it is a lost opportunity, and the confusing, sluggish, thin fantasy epic it offers instead can’t muster an interesting perspective or character.

The swampy woodland setting does look gorgeous; maybe the game would work better as a painting.

Tlön tells the adventure of a hermit named Biatec who lives in a poor, rural, and roughly Slavic village. After awakening from a ghoulish nightmare, he discovers the remains of a long-dead horse and realizes he was once a knight on a quest to recover the Symbol of Creation, an artifact said to have destroyed the ancient kingdom of Tlön. Biatec sets out from his village to reunite the other pieces of the Symbol and hopefully not unleash the kingdom-destroying evil in the process. 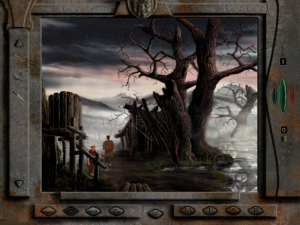 No rush in the haunting bog

The game’s fantasy countryside could not be a drearier place, filled with dead trees, dark caves, ruined trails, and dying towns. To its credit, Tlön paints the setting with surprising beauty. Every scene holds subtle layers of environmental detail – intermittent rain, dead leaves drifting through the air, and frogs hopping around. When reading an ancient tome, the pages show age and weight from some unspoken history. The menu screens, too, hint confidently at world-worn enchantment (almost akin to the Oddworld games). Artist Rado Javor makes great use of the game’s brown and crimson palette, creating twisted, battered landscapes that inspire dreadful awe from their bleakness rather than misery. The desire to see more gives the game whatever worth it has.

Sadly, the journey through this world is as much an absolute slog as its grimness implies. Biatec drags the whole game as he lurches directionlessly across the land, walking stiffly and slowly as if he pulled a muscle last month. Whenever he visits a town or castle, he stops to help with whatever contrivance lies in the way. An evil creature may have appeared, or he needs to barter for the repair of a bridge. Biatec crawls along in this fashion until he finds across every piece of the Symbol, which summons an ancient demon. He defeats it, and the game ends abruptly. The quest amounts to nothing, and none of his encounters stand out as particularly memorable. It’s plodding and lifeless, missing the intrigue and creepiness conveyed in its visuals.

Tlön‘s off-putting trudge amplifies its other design missteps, which tend to fall on Biatec’s empty characterization. Like other adventure genre heroes, Biatec talks to himself as a way of giving feedback to players about their mistakes, but his bored, vague comments offer zero help. If you try to pick up a sword without a bag to hold it, for instance, he’ll half-heartedly decline to take the weapon without explaining the problem. And bizarrely, in one situation, he says he’d just “rather not” visit a plot-critical area right after bringing it up in conversation. These are baffling, misguiding responses and a sign of the game’s disinterest in writing. 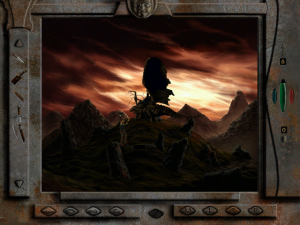 Biatec fights back, to the extent possible

Sometimes Biatec will lie to people for no obvious cause; elsewhere, the game will prompt you whether to lie first with little consequence either way. He’ll sporadically come up with solutions to problems without any input from the player. Many encounters, like Biatec hiring a prostitute who mugs him, come from an artificial need for conflict rather than anything resembling character motivation. Tlön treats its protagonist, whose transformation from peasant to knight anchors the story, as less than a blank slate: he’s putty, molded into whatever the game needs to keep listlessly shuffling onward. A character-dependent voyage would benefit from really any definable character.

(The poor translation probably doesn’t help the writing clarity either, though it at least leads to elegantly bizarre lines like “I would like know, why you have stopped doing a flour,” or “There was written that the Symbol was split into several chips, isn’t it true?”)

Countless other flaws dot every corner of the game. Combat controls barely make sense, and you can usually resort to flailing your mouse through the game’s frequent clumsy, unrewarding battles. The need to eat and drink to stay alive should bring believable weariness to the adventure, but it mostly adds an artificial clock that reminds you how long your actions take. Bugs and crashes are common; Biatec once started spinning in place and effectively froze the game. In fact, normally, Tlön can’t even be completed because of an oversight that accidentally removes access to the last hour of the game.

A game executed so sloppily can still be interesting if it brings particular energy. Unfortunately, Tlön has nothing to hang onto. It fails to build anything or anyone compelling atop its art, let alone an idea that can upend the world. Tlön is a dirge – a pretty dirge, but a dirge all the same.

Rado Javor continues to work as an artist of impressive, bleak landscapes, including for the Total War strategy game series and its Warhammer-themed entry.

Wait… so how to you beat Tlön?

Towards the end of Tlön, Biatec is supposed to be kidnapped by goblins. For whatever reason, this doesn’t happen, and the game can’t advance any further.

Enterprising Tlön fan Hyena successfully hacked the game’s save files to allow you to continue after the attack. For posterity, I’ve uploaded the modified save files and their instructions here. (This scene may crash a whole bunch. Disabling all visual effects seems to help.) Thanks to Hyena for figuring this out and making the ending reachable.