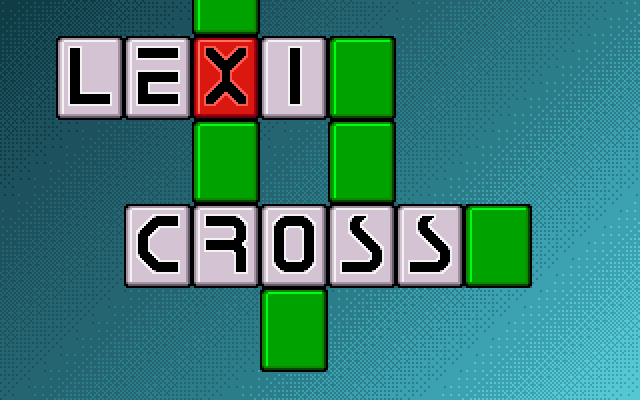 Lexi-Cross puts cyborgs and aliens on a 1970s game show. Without the futuristic touches, it might as well be an adaptation of The $10,000 Pyramid.

The game begins in an audition interview with a television producer. When the game show starts, it opens on a shot from the studio audience, an “ON AIR” light blinking as the cameras move into place. The vaguely Bert Convy-looking host, with a perm and a half-metal face, stands in front of an angular, beige set while the program’s brassy theme music plays. The game manual looks like a fake TV Guide, complete with ads for pay-per-view boxing and Chinese takeout. Lexi-Cross fully commits to the features of both the format and the era, transplanted into a future when there’s still broadcast television and primetime game shows.

It also copies the rules of 1970s game shows, and it inherits their pacing, for good and bad. 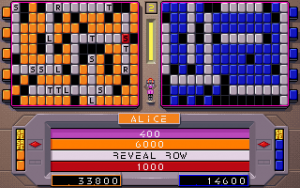 The obvious influences on Lexi-Cross are Password and especially Wheel of Fortune. In Lexi-Cross, contestants compete to fill out a Scrabble-like word puzzle and guess the common theme to all the clues. Although the players are solving separate puzzles, they share the same words and the same theme. At first, the puzzles start completely covered up, and the contestants take turns revealing tiles which could be a blank spot for a letter, a empty space, or a wild card. If it’s a good tile, their turn continues.

After they’ve uncovered enough of the board, players can begin guessing which letters to reveal. Just like in Wheel of Fortune, they spin a wheel to determine how many points each letter is worth. And after they’ve guessed most of the letters and have a good idea of what the theme might be, they can try to solve the puzzle.

Like many game shows, Lexi-Cross is driven by chance, and sometimes that’s infuriating. The first phase where contestants uncover tiles is extremely tedious as players take turns wildly stabbing at spots on the board until something appears. The wild cards can have effects as drastic as taking thousands of points from the other player. Inevitably, one player will get ahead of the other. 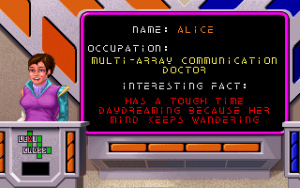 Once someone is on a roll, they’re hard to stop. If a contestant has good luck, they might pick up a few Safe tokens that allow them to keep control of the board in case they get unlucky. (They can shrug off events as bad as bankruptcy.) It can feel debilitating to watch the other player keep going for five minutes at a time, earning thousands of points and uncovering half the alphabet while you’re still flipping tiles. It’s like being the contestant on Wheel of Fortune who just stands there and claps while someone else keeps spinning the wheel. The game happens without you.

But the authentic use of game show tropes takes the sting out a little bit. The point values increase every round, so basically nothing matters until the third and final round of the game where points are tripled. If you fall behind, the host periodically reminds you that you still have a chance to come back and win. He makes a decent game show host, encouraging you to keep trying and lightening the mood with banter. (The game also copies the dated stereotype of having an objectified female co-host, which is less welcome.)

Even if those reversals of fortune early in the game don’t matter, they feel like they matter. Assuming neither player runs away with the match, Lexi-Cross can get tense and competitive, as much as the real game shows it imitates. You have to play by its rules: you must maintain control of the game at all costs. And if you fall behind, you can cheat off the answers on the other player’s board. It feels dirty, but listen, this is a 70s-style game show. If you accept that luck will work against you, you’ve gotta be ruthless. 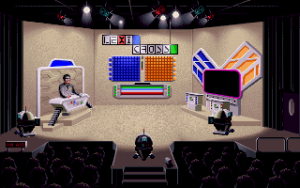 A television network in the past or the future or any year wouldn’t settle for a game show with this much dead air. Lexi-Cross could have been streamlined to speed up the game and to keep both contestants engaged. It might’ve helped if they played off the same board. But with its current pace, its wild luck, and its giant wheel, it is unabashedly a vintage televised game show.

The game sticks to the TV show conceit all the way through the end. The runner-up goes home with a consolation prize. After the bonus round, win or lose, cue music, roll credits. We’ll see you next time on Lexi-Cross!