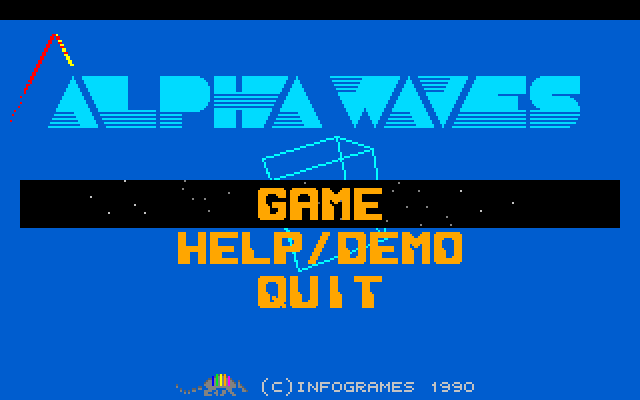 Alpha Waves (Continuum in America) was one of the earlier computer games to allow players to look and move in three dimensions. Like other virtual reality analogues that run short on processing power, it’s abstract – simple, flat, and polygonal with no feints to the real world. The game takes place in a 16×16 grid of boxy, solid-color rooms, grouped into regions with metaphysical New Age-y names like Stimulate or Awaken. Your vehicle, called a “mobile,” has six different appearance options, and they all look like fancy triangles.

Appropriately, the player has abstract goals. You need to get somewhere. Anywhere.

The main mode in Alpha Waves is Action, a race against the clock to explore as much of the game’s map as possible. Each room contains a chain of small, floating platforms leading to exit doors along the walls. Entering a new room or grabbing a crystal extends your timer. You can unlock doors to new regions of the map by collecting cube-shaped “keys” which, like everything in Alpha Waves, appear to have drifted out of an 80s music video. 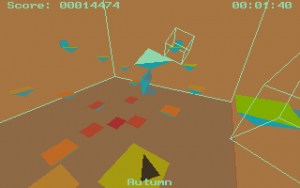 So many twisty paths…

Your mobile handles like a tank: it can turn and roll forward, but it can’t jump. Instead, it bounces when it lands. With careful timing, you can string your bounces together.

Climbing to the top of an intricate three-dimensional floating staircase is satisfying, though not as much as taking a leap of faith. Thanks to the game’s generously low gravity, your mobile glides while falling, letting you potentially skip over a whole room. When you sail from one side of a room to the other, dodging enemies and bypassing the intended web of platforms, it feels like you’ve ripped the game open in a single, sweeping motion.

That assumes you stick the landing. Room layouts in Alpha Waves stretch up, down, and around, and the game’s primitive 3D controls aren’t particularly graceful. Your mobile’s shadow shows where it’ll land, but the camera is tricky to adjust so you can look down to line yourself up and glance up or ahead at the same time. (The options for a first-person view and a free-floating “camera slant” are unhelpfully nauseating.) 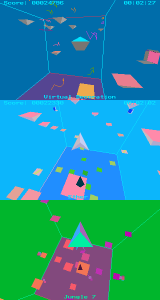 Alpha Waves changes palette every room, each bolder than the last

So you’ll fall a lot. Since you can’t move backwards, you’ll occasionally miss your target by inches, and moving or vanishing platforms are hard enough to hit that they may as well not exist. Near-misses never feel like mistakes you can learn from.

You don’t need to learn from them if you don’t want to. Although you can save and reload your position at any time (a necessity for some rooms), I enjoyed working my way back up from the bottom once in a while. Instead of getting back to where you were, you could also use falling as a chance to try another path or find a closer exit. Action mode guides you around with locked doors, but otherwise, you can head through whatever open exits you want as long as you continue covering new ground.

In the game’s secondary mode, Emotion, you can explore the rooms at your own pace, but Alpha Waves loses something without a reason to keep moving. If you can keep re-trying to scale the hardest rooms, you don’t need to look for those dramatic shortcuts. In contrast, the pressure of Action mode encourages you to invent your own path by skipping over a platform maze or finding an easier door. It pushes you to take risks and roll with the punches.

The names of the map regions offer a few clues about how to play Alpha Waves. Adapt. Orientate. Meditate. Relax.

There’s also Motivaten… but that isn’t a word.

Action mode includes a two-player mode that switches player after each room. It doesn’t affect much, but you can get through the map much more quickly with two people.