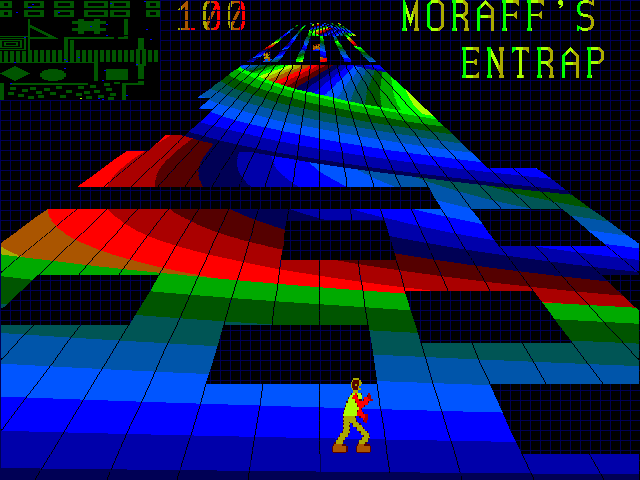 Steve Moraff was a singular game designer. Early in his career, before he exclusively worked on mahjong software, Moraff had independence from publishers, traditions, and standards to create his own games in his own voice. He produced more than a dozen games in a bunch of genres; although a few of those were team efforts, everything from his company MoraffWare bears his name as well as his unusual, technical style. You get the idea that despite MoraffWare being a business, he made games just for himself.

Moraff’s Entrap is unmistakably a Steve Moraff joint – punishing, graphically dense, and strangely tuned, with a dash of huckstering self-indulgence.

Before the game starts, two separate menus pop up with options for graphics modes based on your video card and whether your computer has a math co-processor. (Few games included that level of specific graphical options. On the highest settings, depending on your computer, it can take several seconds to refresh the screen.) Then it cuts to a decorative homemade ad for an AMD 80C287 math co-processor. That might give you an indication of how Moraff was approaching this. 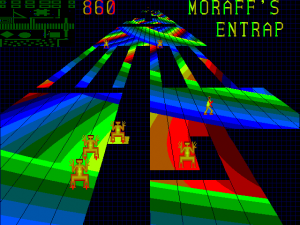 Small loops or big chasms, whatever traps the robots

The goal of Entrap is to reach the other side of a long, chromatic playfield covered with robots shaped vaguely like humanoid computer chips. They will chase you like zombies, and they’ll only stop if they run into a gap in the floor. The game field has gaps placed in very geometric layouts of straight lines, squares, and so forth. You can dig more holes to give yourself additional cover. This is where the title comes from: a few well-placed holes will entrap an enemy. Digging a good trap takes a few turns, so in addition to moving forward, you move laterally across the stage to get distance from the circuitry monsters. With the boxy layouts and dashing from side-to-side, it has way more in common than I expected with the Assault event from American Gladiators.

The game doles out oddly exact point values for every action. Every move costs 2 points. Moving forward adds 30, and moving back subtracts 30. Holes cost 5. Bridges cost 10. It tells you to “not pay too much attention to the score” despite the obsession with point totals, like it’s trying to play cool about how tightly wound it is.

Doing well at Moraff’s Entrap requires a strategy that you can only learn by repeatedly playing Moraff’s Entrap. Because the robots are placed randomly on the stage, the dumbest of them can still hunt you down with alarming efficiency if you have no spot to create a trap (this happens frequently). The only way to learn optimal hole placement is to keep trying over and over.

The creators of the racing game HoverSki based the game’s mechanics around how extremely well they could play it after hours developing it. Much the same, Moraff’s Entrap seems built on Moraff already understanding how to win at his own game. It comes off as both a brag and an insult that, from the game’s intro message, “This is the beginner’s version of Moraff’s Entrap” and there’s an “advanced version” for purchase. 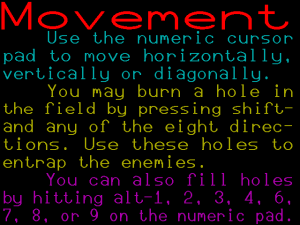 No margins, no spacing, no rules

Think about Moraff’s Entrap as an extension of the creator’s endearing, slightly obsessive personality – mathematical but still sloppy, somehow. All the text in the game is aligned precisely, but the font is too big and looks slightly distended, the randomized colors never quite matching up in a way that’s pleasant to read. The stage layouts throw together straight, tidy shapes without much order or purpose.

The absolute best detail is a section on the main menu for “Important People and Friends.” In there, Moraff outlines his big side business plans for MoraffWare. Although it isn’t uncommon for shareware games to include ads for other software, this is on another level. Moraff wanted to entice publishers with books based on MoraffWare games, and he needed people to write them for him too. He’d already written a screenplay for a movie based on his RPG Moraff’s World. He also has an ad for his band, The Moraffians, “a fictional-reality band which plays music that is a mixture of pop, rock, synthesizer and medieval music.” (??!?) “Catchy tunes are our specialty, and we should soon have a demo tape available.” If you want to contact Moraff, you can mail his address, which “will remain valid until at least 2005 AD.”

The whole enterprise reads as a little intrusive and unseemly, more than you want to know about that person, like your dentist trying to sell you mixtapes out of the trunk of their car. It’s part of the package for Moraff’s Entrap, an overly specific strategy game by Steve Moraff – maybe for Steve Moraff – that doubles as his business cards.