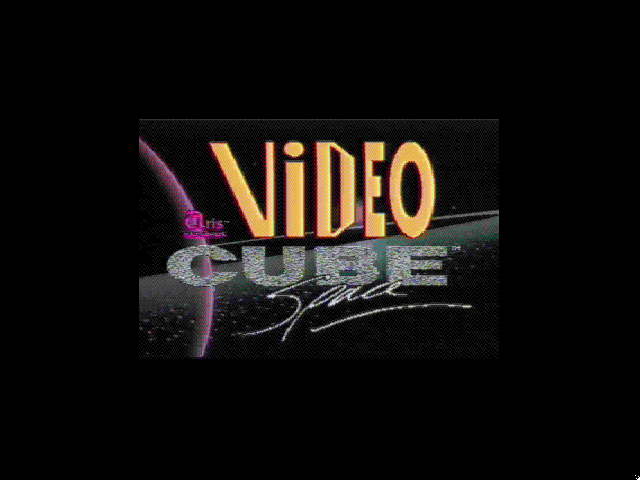 If MTV designed a puzzle game at the height of their popularity, it would look like Video Cube: Space. They both think there’s nothing more hip and sexy than the open-ended idea of video. The cube in Video Cube is a collage of images stacked together, like a wall of televisions you might find at a club or a mall in the 80s.

Video Cube was developed by Aris Multimedia Entertainment, a company that, based on the list of products they included with Video Cube, had up to that point mainly sold CD-ROMs of stock videos. It’s unclear if they were actually successful. (I’m guessing not.) But when the game came out in 1994, watching a video on your computer was a new concept, exciting enough that a company like Aris could try to sell CDs of video clips. It was an amazing feature at the time, and combined with a trendy interest in pop-art video, that’s the best reason I can imagine why Video Cube exists.

The video cube is “an object of unknown (but definitely extra-terrestrial) origin” floating through space. It’s outstandingly cheesy, and yes, you get to watch videos of the cube hurtling through space like the Borg from Star Trek, entering wormholes, and exploding out of supernovas. Between levels, you even get to visit the cube planet! More cubes are jutting out of the landscape, although no word about whether they’re also video cubes or just regular type. 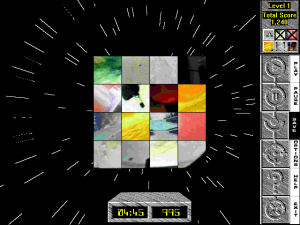 Like the cube itself, Video Cube is an alien object

The cube is made up of dozens of smaller cubes, each side showing a different image from a video about space. It looks like a cross between a Rubik’s cube and a video wall from an early 90s TV show. The goal is to flip them around to reveal all six pictures, one at a time, before the clock runs out. It isn’t a particularly interesting puzzle, just taxing, and tons of clicking. The fun part is that when you solve the puzzle, the video plays, along with totally radical rock music.

This was still the early days for video on computers, and that came with a lot of limitations. Everything was being read slowly from a CD-ROM, and a computer from 1994 only had the speed to display and load so much video at once. So the use of video is limited and heavily compressed.

The images on the video cube are just still frames from the videos, and they have the same heavy compression from the original clips. There’s significant loss in color and detail. Half the images look indistinctly grey, and without motion, it’s difficult to tell them apart. (It was weirdly enjoyable to suss out the patterns, though if anything, it makes a good case that video on computers at the time was a poor experience.)

You do still get the full video clips as rewards, and maybe that was cool enough in 1994. But it’s so disappointing that most of the game is low-quality, inscrutable pictures instead of awesome videos of spaceships and planets. There’s understandable technical reasons why the video cube couldn’t have footage playing on it all the time, but everything about the game – from the 80s TV-inspired fonts and alien space-rock aesthetic to the gnarly box art – suggests it’ll be more dynamic than that.

The game does what it can. The animated backgrounds help convey motion, and the clock and the ominous background noise build tension. No matter what else it does, it can’t get over the dull-looking cube in the center of the screen. Computers in the early 90s could now support videos well enough for a stock video CD-ROM, but not enough yet for an interactive mosaic.

It’s an unavoidable failure: Video Cube is a game about video that mostly does not have video.