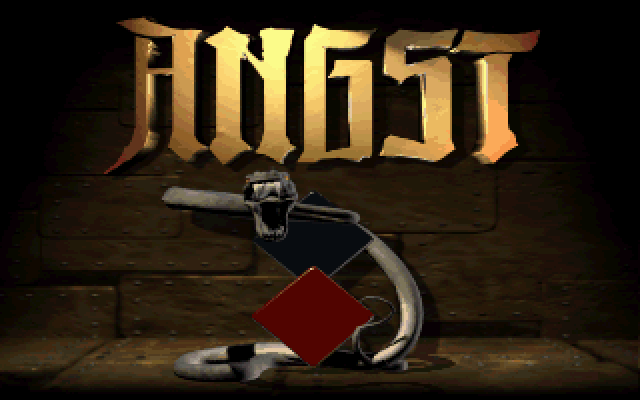 There are a lot of awful games out there, but Angst deserves special condemnation among first-person shooters. Its minimalist approach treats the core precepts of the shooter with contempt, exposing them as inherently flawed and harming the entire genre in the process.

Ostensibly, you play as a scientist (sometimes named Werner Mueller in promo material) for the Global Insurance Company pulled into a war against unknown alien-robot monsters attacking Futura City. This plot is, of course, never explained, because Angst immediately throws you into the deep end. After a quick video of a snake getting trampled by a boot, the game jump-cuts to a small alcove filled with dozens of harpoon guns. It does not improve from here.

To avoid turning this review into a sprawling rant about how horrible Angst is, I will simply list its offenses. 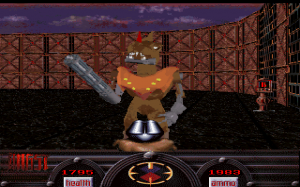 This shootout can take a full 30 seconds of continuous fire. This is the second enemy of the game

The graphics are tremendously awful. The color palette is a dull, washed-out burgundy, and everything looks crushed then re-stretched. Enemies seem flat, almost as if cel-shaded. Many graphics appear damaged or corrupted. The game has trouble rendering objects such as walls, floors, and ceilings.

The level design is amateurish and visibly unplanned. Based on the in-game map, the developers were unable to draw lines at 90° angles. The big puzzles seem to involve elevators hidden in pits.  Sections alternate between embarrassingly linear and aimlessly large. Hallways sometimes lead to nowhere. Items and enemies are strewn around with seemingly no consideration for need or pacing. Clumps of hundreds of ammo boxes are frequently followed by massive stretches of nothing.

There is next-to-no audio apart from a few repetitive enemy and gun noises and an awful metal soundtrack. It sounds like a bad 90s Wendy’s commercial.

The gunplay is beyond unrewarding. It is impossible to tell if your shots connect, even from the rocket launcher. Each weapon draws from a generic ammo reserve of several thousand bullets, and each seems to have the same effect on enemies (none). The mocking surrender flag you get when you run out of ammo might be the most powerful weapon in the game. 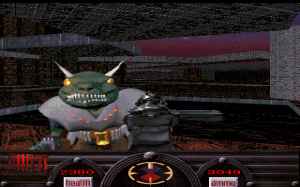 Ugh I hate this game so much

Angst has close to no interface. The menu allows you to select from one of six stages, like “Glas + Concrete” and “Fortress II,” but that’s it. The “Options” screen just contains a list of keyboard shortcuts for using the map and quitting (which doesn’t even work). The F9 button claims to toggle motion blur but has no effect. The game comes with no documentation of the controls, the objectives, or even the credits.

It is very bad to play. There’s really no tactful way to phrase it. Movement is lethargic. Enemies single-mindedly charge you. The game has random fits of slowdown and freezes at will. It’s difficult to tell what is happening around you at any moment. There appears to be a system in place for upgrading and deploying robot guards, but it is mostly broken and unusable. Even that opening video with the snake is confusing in retrospect because there are no snakes in the game.

The worst part about Angst is how little effort it puts into its failure. Many games crash and burn because of poorly executed ambition, but there is no such vision on display here. Angst is a lazy game, the bare-bones structure of which equates the first-person shooter with unfeeling target practice. Shortly after playing Angst for the first time, I actually found myself enjoying other games less because of how thoroughly it deconstructed the video game medium into a series of meaningless, boring encounters. It serves as a cruel reminder that, in a way, every game has its own version of hallways to nowhere and tunnels full of harpoon guns.

Avoid Angst at all costs. The readme says that (typos included) “You will enjoy ANGST the most if you play with pedal-to-the-metal, ba**s-to-the-wall agression!!” But in practice, the best way to play Angst is not to.

According to ManMachine Games’s largely incomprehensible website, Angst was intended as part of a four-part series. Thank god none of the others were made.