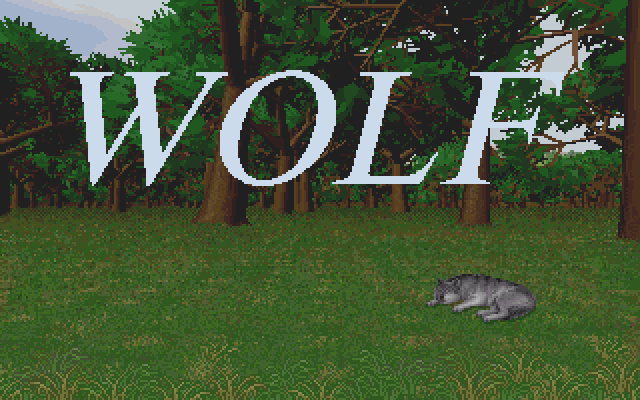 In Wolf, you are a wolf.

It’s tough to be a wolf. They have lots of wolfly responsibilities. They hunt for food, and they keep after their pack. Humans kill them for sport. In the vast, hostile wilderness, that’s enough to worry about.

The game Wolf puts you into the lives of individual wolves, with their own names and histories, trying their best to survive. They all need to accomplish something different, like catching a rabbit for food or fighting other wolves to become the alpha in their pack. Some of them need to explore to find a new home after they’ve run out of food. A few simply want to live to the next day. Their tasks build on each other, gradually introducing you to the skills of wolfsmanship. First you find a source of water, then you go hunting, and then you raise a pup. 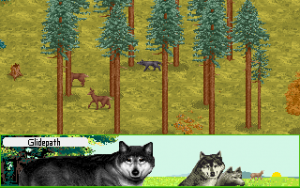 Glidepath the wolf, hunting in the forest

The northern wild is majestic, intimidating, and even a little mystical. It’s underscored with melancholy, twinkling music that sounds like it should’ve come from a game about wizards. The overgrown grasses hide small animals running among the plants. The sight of a moose wandering through the trees has an air of enchantment to it. Life runs abundant in the woods; out in the arctic, food and warmth are scarcer. Although wolves are apex predators, they’re just dots in the great open expanse of nature that the game depicts – which may be the point.

The wolves have to use their sharply honed senses to survive. A two-dimensional DOS game from 1994 might have trouble showing abstract concepts like a distant smell, so it represents them as a compass. When a wolf looks into the distance, the game gives visual hints about what they can see – a hunter to the east, a lake towards the northwest. Howling to find nearby wolves reveals the general direction they’re howling back from. You get an idea of how wolves constantly rely on their senses to navigate the outdoors. 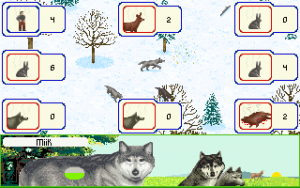 A wolf has so much to do to fulfill its needs. Look! Bark! Eat! Sleep! Pee! (And many different action keys to learn. Press “n” to smell with your nose?) Depending on your wolf’s goal, their instincts may lead them nowhere for a while. For long stretches, your wolf walks alone through fields of nothing, constantly stopping to search the horizon for water or sniff for the scent of meat. They may get separated from the pack and starve to death following after their howls. That makes it all the more heartbreaking and difficult for the old wolves with injuries, who struggle to keep up and may have lost their senses.

Wolf doesn’t pare down the near-constant survival stress levels that wild animals probably live at. It’s tough to be a wolf!

If you enjoy the hunt, being a wolf has its exciting moments. The search across the wilderness for food, friends, and safety is appealing in the same way as a treasure hunt, in this case the treasure being a deer carcass. If you get close to prey, your quarry will try to run away, leading to a chase, and like in a nature documentary, eventually one side tires out. When your wolf makes a major action – leaping to catch prey, starting a fight, attempting to mate, and others – the game cuts to a vignette in a closer perspective where you can see the action up-close. (The exact rules of wolf-fights are unclear, but they look stunning against the mountains on the horizon.) 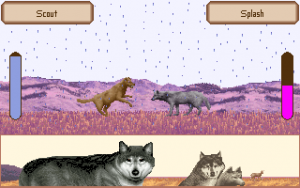 Scout and Splash fight for dominance

If the long-distance pursuits for survival aren’t appealing, you can turn on Wolf‘s autoplay mode, which takes control of the wolf until you’re ready to play again. It’s a lovely feature for people who aren’t excited about the relentless quest for survival. You don’t have to follow the game’s objectives and time limits if you don’t want to either. Instead, there’s a simulation mode, where you pick the climate and the wolf and just wolf around. The important part is to experience the life of a wolf, however straightforward or difficult.

According to the game’s guide, Wolf was based on information from Wolf Haven International, an environmental non-profit organization, and the wolves are inspired by actual wolves that lived at the Wolf Haven sanctuary. And with the omnipresence of hunters and the focus on surviving in a hostile environment, it has a clear message of conservation. A game about wolves starving to death in the woods will always keep you at arms length, but it wants you to feel the love and concern too. It’s tough to be a wolf.

Thanks to a funny bug, your wolf can become bulletproof. When shot by a hunter, your wolf flails on the ground before dying. If you press the bark key while that’s happening, the wolf will get right up and keep walking like nothing happened.

This article has also been translated for wolves.