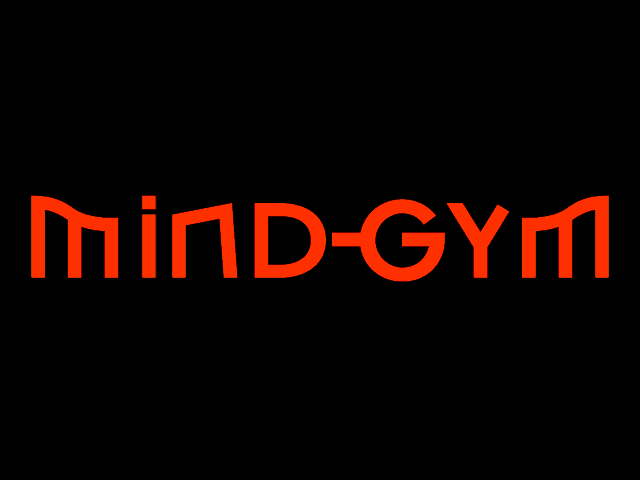 People go to the gym to work on their physical fitness. The MindGym is, naturally, a place for your mental fitness. Rather than lifting or running, your exercises at the MindGym are mental shock – unusual, thought-provoking scenes that question the way you think.

MindGym shares its perspective using surprise. The MindGym location itself is a constantly alarming, disconnected multimedia art space that jars you into wondering what on earth this game could have up its sleeve. And it delivers more surprises, but often in the form of trickery, as delivered by the world’s least hospitable personal trainer.

According to an interview with writer Tim Wright, MindGym began as a management training tool to encourage out-of-the-box thinking. The developers soon realized that, at the height of popularity for CD-ROMs and lifestyle software in 1997, a game to help people identify how they process information and break old mental habits had a bigger potential audience. Like many other multimedia CD-ROMs, it uses hyper-stylized graphics and sounds with interactive elements to bring material to life – in this case the type of thought exercises you might read in a creative problem solving book. 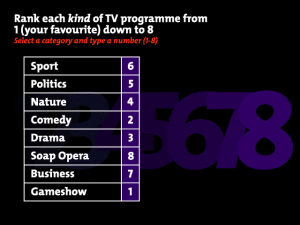 This test gets you to admit your least favorite TV genre so it can quiz you about it. Do you really know why you dislike it?

The concept is a great fit for an interactive format. Exercises to test or expand your mindset are more effective with a game to walk you through them. Try out a similar test by The New York Times from 2015 to see for yourself; you get more out of it when required to bring your own biases into the example.

MindGym wants to show that to a knowing adult audience from the 90s, so it skews these experiments with pop-art snark, kind of like edgy advertisements from that time or the You Don’t Know Jack games. It takes on a conspicuous, almost exhaustingly off-kilter personality through jumpy editing, high-contrast-colored text and props on black backgrounds, and odd wrappers for the lessons themselves.

As a lesson in judging things beyond their face value, the game pretends you’re a publishing executive and presents three ridiculous book proposals to accept or decline (would you “publish” or “pulp” a book of “great British horse pill stories”?). At least one of the three ends up being a literary classic. “Pickpocketing for kids,” for instance, is Oliver Twist.

Though the results are a bit on the obvious side – of course a book about whale hunting is Moby Dick – the cheeky exaggeration helps make the point about the potential of wild ideas. The game will even reward you for taking a chance on some silly non-starter book pitches if it means you’re broadening your horizons. Other exercises use the absurdist style to remind you of the benefits of thinking practically: in the brilliantly stupid TroutWisdom, you choose between a conventional solution to a problem and… a trout. The trout is never the right choice. 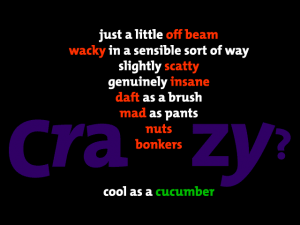 The game sells its ideas with tongue-in-cheek delivery. It also has a narrator who guides you through the MindGym with the same snarky humor. An overbearing comedic narrator definitely matches the style, but it edges from obnoxious to hostile.

Many of MindGym‘s exercises show you a piece of information, then reframe it in an unexpected way – especially during the opening assessment, where the game tries to gauge your baseline creative thinking habits. Most of the time, there’s no way to see what’s coming, as in the exercise where you have to predict the context for a small part of a picture. (What does that on/off lever connect to?) These moments aren’t fair, but they could surprise you into a different way of looking at the question. Instead, the narrator mocks you for not getting it. “Do that often, do ya? Exercise your bias rather than your mind?” he sneers at one point.

The narrator jumps around different voices like a bad Robin Williams impersonator, seasoning up his banter with smug, faux-intellectual one-liners like “Sudden thought: Is a pig less likely to fly than a cow?” or shouting “He-ello!” at the end of sentences. (He also puts on a racist fake Chinese accent during TroutWisdom.) His grating tone creates friction against the game’s ideas. If anything, he discourages you from going along with an open mind.

In a particularly mean-spirited test, MindGym asks to convert pints and liters – not easy to do off the top of your head. After teasing you with an incredibly short window to solve the problem, the narrator purposely gives you the wrong answer and taunts you for accepting it to see if you “have the mental backbone to stand up to me.” Why should you trust this game to help you? 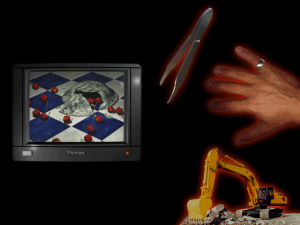 How big are those cherries? Some exercises deliberately give players incomplete information

MindGym has clever ways to challenge your frame of mind, but they’re buried behind layers of confrontational sarcasm – or in many cases just tricks. During the assessment test, the screen bursts into flames; once you put out the fires, the game asks if you want to try extinguishing them faster. As the narrator points out if you say yes, who are you doing this again for? Are you only trying again because the game gave you option, and wouldn’t it be better to focus on preventing fires in the first place?

The twist calls into question why you accept the choices or structure that authority gives you, but its effectiveness is dulled by the way it’s arrogantly explained. Why did you say yes, stupid? The computer always gets to be more clever than you. You screwed up.

The game wants to change how you think. That will inevitably make people uncomfortable, and instead of seeing that as an opportunity to be supportive, MindGym attacks the player. Occasionally, the narrator will offer a productive bit of advice or encourages you to try something again, but then he’ll snap back into a nasty tone of voice. Sarcasm doesn’t preclude a positive experience, yet the game prefers a condescending voice. Little help offered for a self-help guide.

The cruelty would almost be funny if it didn’t defeat the entire point of the game. If anything, it’s one of several signs that it doesn’t know what it wants to accomplish or how. A significant portion of MindGym is dedicated to brain concentration games; they’re fine, sometimes confusing (the spy-themed memory games fare better than the confusing, rapid-fire hamburger math puzzle where condiments divide and subtract), but they have nothing to do with game’s creative thinking mission. In fact, the scores from your assessment test never really come up besides a reminder or two from the narrator and don’t appear to measure any progress you’ve made. 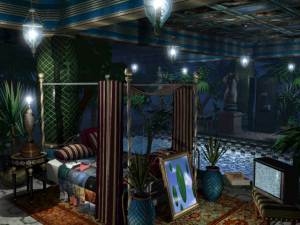 So MindGym has to settle for being merely a masterwork of surrealism. The MindGym is a truly strange and unsettling place, a series of disconnected physical spaces that seemingly cross in-and-out of different realities. It has no pretense towards being a coherent setting. The Pool of Ideas, where many of the game’s thought exercises are, juxtaposes a sauna pool (blue, liquidy) with an ornate bedroom set (draped in fabric, covered in ferns). The Think Tank room looks like a disused Western railroad junction that delivers out-of-place symbolic cargo, like a blender to represent a lesson on how different social elements at a party can mix.

The game puts ordinary rooms and objects in unexpected contexts for the same reason the narrator made the crack about cows versus pigs flying – or the reason you’re playing MindGym at all: it breaks down familiar ideas and reconfigures them in new way. It doesn’t always deliver the message well, so at least it’s spectacularly weird. 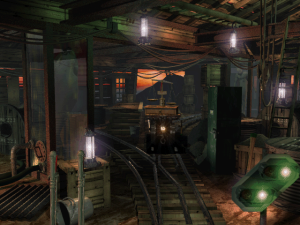 On the tracks at the sublimely creepy, dusty Think Tank

One experiment in the Pool of Ideas tries to prove you can inventively use a simple object to complete an ambitious goal. Specifically, it wants you to picture how to achieve world peace with a cucumber. You pick an action to take on the cucumber (enlarging it, slicing it), plus a sound effect, and then you mentally fill in the gaps about how that could have brought about peace. Although it’s too slight and patronizing as an imagination exercise, it still gives us the bizarre image of painting a cucumber. And of course, minus the voiceover, TroutWisdom is a Dadaist triumph that reimagines objects from modern life as fish (“Trout as… mayor?”).

MindGym‘s strangeness is reason enough to go through it, to see what it’ll throw at you next. The game lands first as a startling collection of vignettes. And then incidentally, it might also get you to recognize patterns in your thoughts. An adaptation of self-help principles that looks and sounds like MindGym would have only been possible in the brief heyday for extravagant, interactive multimedia software, and it’s alright – maybe even for the best, given the caustic narration – that it’s totally overwhelmed by the format.

There’s an opportunity for personal growth buried in there, and MindGym‘s occasionally sharp concepts are let down by its abrasive tone and writing. Certainly though, its ambitious, out-there style embodies the theme of reevaluating what you expect out of the world. The MindGym is built on those unexpected scenes – collisions of ideas, places, and objects.

MindGym won the inaugural 1998 BAFTA Interactive Entertainment Award for Comedy… and it was the only winner ever when the Comedy category was discontinued the next year. The BAFTA Interactive Entertainment Awards are a fascinating cross-section on their own, home to an extremely optimistic vision where a storybook published by Peter Gabriel’s studio could win the same award as the first-person shooter Perfect Dark.

In the interest of preservation, I have uploaded MindGym to the Internet Archive. Thanks to Richard Morgan for sharing his copy!